California Governor Gavin Newsom addressed the state's homelessness crisis from the city of Sebastopol in Sonoma County on Monday, where he signed a $12 billion bill for homeless funding.

SONOMA, Calif. - California Governor Gavin Newsom addressed the state's homelessness crisis from the city of Sebastopol in Sonoma County on Monday, where he signed a $12 billion bill for homeless funding.

The governor is highlighting his $100 billion California Comeback Plan, which includes the $12 billion, over two years, from a one-time surplus. The plan also involves more than $10 billion in investments to spur the construction of affordable housing, a press release stated.

"We can end homelessness in the State of California," Newsom said.

The governor said the bill is the largest funding and reform package for housing and homelessness in California history.

"We are going all-in with innovative solutions that we know work – with a focus on creating housing to support people with severe mental health challenges, and with more money than ever to move people out of encampments and into safer situations," Newsom said. 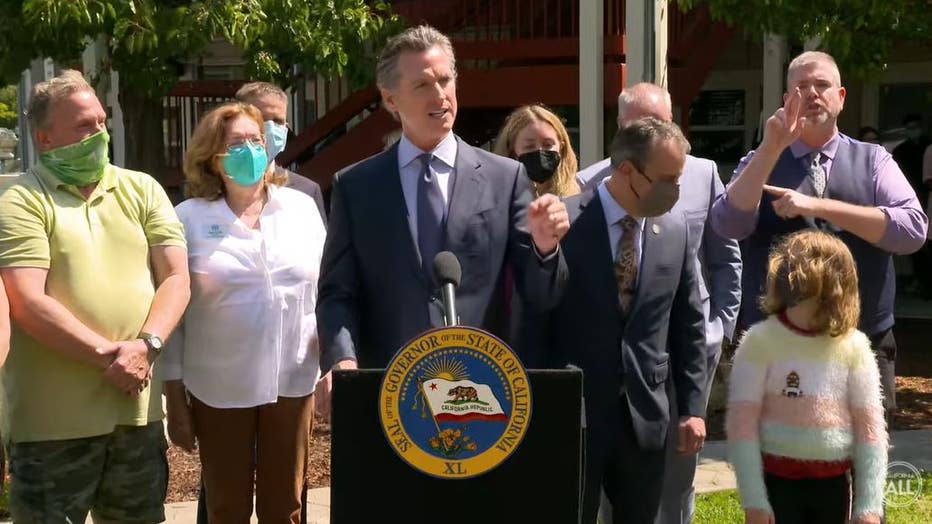 Newsom, flanked by city and state officials in the North Bay, touted the success of Project Homekey, which has helped the state acquire hotels, motels and other spaces for people experiencing homelessness.

The project was able to acquire 6,000 housing units into escrow in six months during the pandemic. 10,000 people are currently supported by the project. With the signing of the new bill, as many as 42,000 new homeless housing units will be created.

Speaking briefly before Newsom, State Sen. Mike McGuire (D-Healdsburg), said the state's north coast has some of the highest rates of homelessness. Places like Mendocino and Humboldt counties have some of the highest homeless populations per capita in the nation.

McGuire said California's spending on housing from the bill, AB 140, is unprecedented. A beautification program for the state's downtown and freeway areas is expected to generate 11,000 jobs over three years.

Part of the plan's spending includes $3 billion in conservatorships. "We're proud of that," Newsom said.

Newsom was asked by a reporter how he would keep California from becoming a magnet for homeless people looking for resources. He answered in part that America has responsibility and accountability to address these issues.

"We've got to take responsibility. Do more. Do better," he said. He added that if people at all and any income levels want to start over, that's part of the "California dream" and that "opportunity should not just be for some people."

Newsom said a plan, resources, and political will are of utmost importance when combatting homelessness.

Turning to the coronavirus, concerns over the Delta variant and masking guidelines, Newsom reminded that people can change the course of history by getting vaccinated.

He said this country has the vaccine, the one thing that people want, and that rising hospitalizations and cases could once again plateau in two weeks, contingent upon if they were to get their vaccinations, especially if they have not been vaccinated at all or if they still needed their second dose.