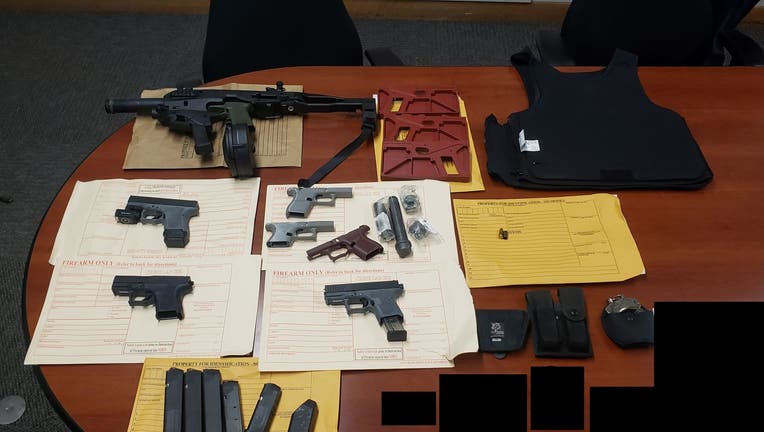 The suspect, identified by police as 31-year-old Cameron Ybarra, is facing numerous charges including assault with an assault weapon and explosives charges.

KTVU's Evan Sernoffsky explains how the police investigation unfolded after the suspect opened fire on a tow truck driver attempting to repossess a vehicle.

"This is very concerning and it’s very fortunate that we were able to take him into custody," said Sgt. Michael Andraychak, a San Francisco police spokesman.

Ybarra’s attorney, however, disputed the charges that have led to him being jailed pre-trial without bail.

"Mr. Ybarra is a small business owner and U.S. Army veteran, having served for six years in Iraq, Afghanistan and Kosovo," Deputy Public Defender Will Helvestine said in a statement to KTVU. "Mr. Ybarra is innocent of these charges and we look forward to his day in court."

The arrest stems from an incident on Feb. 21 when a repo man showed up outside Ybarra’s home on the unit block on Stillman Street near South Park.

While the repo man was hooking Ybarra’s Mercedes-Benz to a tow truck, police said he heard a "loud noise." The repo man looked up to see Ybarra standing outside with a  gun and turned to find a bullet hole in the side of the car, police said.

The repo man let Ybarra get his belongings out of the vehicle, but when he went to tow it again, officials said he noticed Ybarra pointing an assault rifle at him.

The repo man left the scene and called police. Officers arrived and towed the Mercedes, but police said they could not locate Ybarra.

Two days later San Francisco police and agents with the Federal Bureau of Alcohol, Tobacco, Firearms and Explosives served a search warrant at the home.

Police said Ybarra was armed and violently resisted but was taken into custody at the scene.

Inside the home, authorities said they found several untraceable ghost guns, an illegal assault rifle with a muzzel suppressor and high-capacity magazine along with a silencer, bomb making materials and an explosive device in the refrigerator.

Ghost guns are untraceable firearms that are typically home-built. California requires anyone who manufactures their own firearms to obtain a serial number from the state Department of Justice.

Ybarra is due back in court on March 8.

He is currently out on probation and has an open burglary case. Police said he injured an officer while resisting arrest in 2019. That officer still has not returned to full duty.

Ybarra was arrested in 2016 after being accused of stealing $210,000 worth of ivory relics from a gallery on Fisherman’s Wharf.