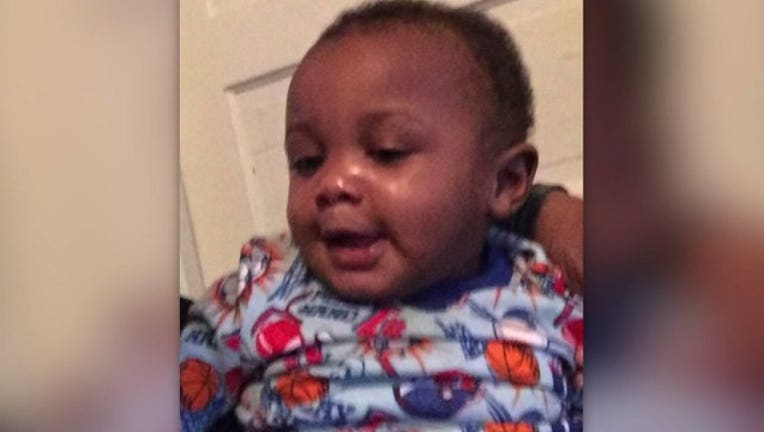 Family photo of the boy, identifed by his mom as Korey Brown. The boy's mom says he had bite marks on his body when she found him in daycare bedroom in Muskegon

An 8-year-old girl is suspected in the death of a 1-year-old boy who was left unsupervised in a home day care in Michigan, according to the Associated Press

Muskegon Police Chief Jeffrey Lewis told MLive in Muskegon that an 8-year-old girl is suspected of killing the child in a daycare home on Friday, who was found concealed in a Pack 'N Play in a bedroom in the home. Lewis told MLive that he's never seen anything like this before.

"I thought I saw everything," Lewis said. "This one floors me. I can hardly get a grip on it."

Lewis said that the only witness in the child's death is a 5-year-old, making it harder for police to investigate. He said the 1-year-old had been crying and "the 8-year-old dealt with the baby crying.

According to FOX 17 in Grand Rapids, the boy's name was Korey Brown. His mother, Bryanna Reasonover, says she found him covered with bite marks and bruises when she went to get him.

Reasonover said she dropped him and her three other children at the daycare Thursday night in Muskegon. She told FOX 17 that employees had no idea anything was wrong.

"When his face rolled over he had all these bruises on the side of his face. And that's when I said what's wrong with my baby's face," Reasonover said.

The boy never regained consciousness and Reasonover says a doctor pronounced him dead later that morning at a hospital.

FOX 17 tried to speak with the owner of the daycare but nobody was available for comment and their phone calls were not returned.

The Associated Press reports that the 8-year-old was taken to a hospital for a mental evaluation.