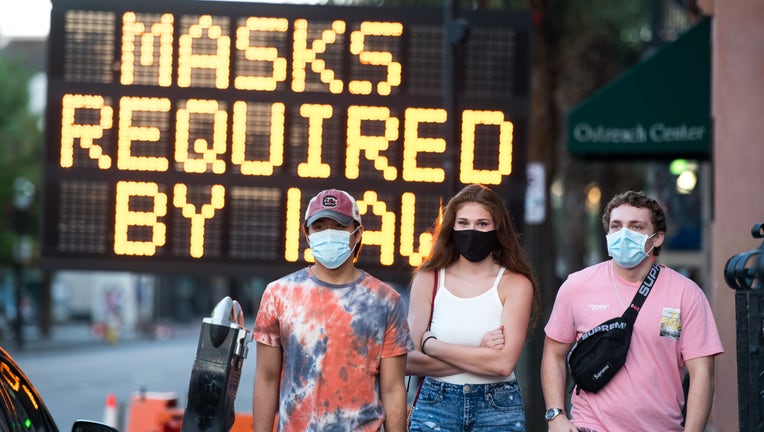 Hospitalizations from COVID-19 have hit their highest points recently throughout the Midwest, where the growth in new cases has been the worst in the nation.

But that's not the message coming from a number of Republican governors in the region, who are working to find silver linings in the ominous health data as outbreaks surge in their states.

“In South Dakota, we didn’t take a one-size-fits-all approach and the results have been incredible,” Gov. Kristi Noem told lawmakers in her state, which Johns Hopkins University says ranks second in the country for new cases per capita.

Oklahoma's governor has been effusively upbeat about progress against the virus, despite what figures compiled by public health experts and a White House task force show. North Dakota's governor has called his state's test positivity rate an achievement, even though its rate of new cases tops the nation.

The rhetoric in some cases is mirroring that of President Donald Trump, who continues to downplay the virus' risk even after being hospitalized with COVID-19. And it's worrying public health experts concerned about a flu season that may exacerbate the outbreak's effects.

“Public health is built on the backs of thousands of individual actions. ... In order for there to be behavior change, there has to be trust on the data and the guidelines," said Dr. Thomas Tsai, a surgeon at Brigham and Women's Hospital and assistant professor at the Harvard T.H. Chan School of Public Health.

Most of the Midwest Republican governors where the virus is worsening have either refused to enact statewide mask restrictions or have been rolling back restrictions imposed because of the pandemic.

Trump, who tweeted “don't be afraid of Covid" as he was being released from the hospital, cheered Noem for her speech to the Legislature last week, where she championed her refusal to issue a stay-at-home order or other restrictions.

But South Dakota's new cases and positive test rates rank at or near the highest in the country. The number of people hospitalized in the state because of COVID-19 reached a new high last week, but Noem prefers to emphasize that only about 10% of the state's hospitalizations are because of the virus.

Doug Burgum, North Dakota's Republican governor, acknowledges his state's numbers are moving in the wrong direction as it hit new highs for active and newly confirmed cases, as well as hospitalizations. But he's also touting the state's test positivity staying in the 7% range.

“That’s an achievement compared to many, many other states that have never been in the spot to have this low of a positivity rate and have their economy open,” Burgum said. “If you’re saying that among the states, who’s doing a great job, those would have to be some of the criteria you would have to look at.”

In Iowa, which has eased most of its earlier coronavirus restrictions, COVID-19 hospitalizations also hit a record high last week. Gov. Kim Reynolds, however, has defended the state's decision to reopen bars and send students back into classrooms without masks required.

Missouri Gov. Mike Parson has cited where he sees his state making progress, even as a White House task force recently listed it in the “red zone" for its high rate of new cases and positive tests. The state also recently hit a new high for hospitalizations. Parson and his wife were both diagnosed on Sept. 23, though they've both recovered.

“The fight is not over, but we are on the right track, and we will get through this," Parson said in a video posted Sept. 30.

Some governors are even pushing back against Trump's own advisers for giving blunter assessments of their states' situations. Oklahoma Gov. Kevin Stitt, who in July became the first governor to announce he had tested positive for COVID-19, lashed out at the White House Coronavirus Task Force after it said high community transmission led to “many preventable deaths" in Oklahoma.

“The governor maintains that Oklahoma has performed much better than the nation as a whole in terms of protecting our most vulnerable, and the White House agrees with that assertion," Stitt's office said.

The governors putting a positive spin on their states' worsening situations face little political fallout for doing so, and are even facing pressure from the right to lift any remaining restrictions. That's the case in Arkansas, where a group of Republican lawmakers are suing to invalidate a mask mandate and other directives imposed by GOP Gov. Asa Hutchinson.

Hutchinson also has been criticized by Democrats, teachers' groups and others who say the governor has sent mixed messages about the seriousness of the state's outbreak.

“I understand the drive and need to put a positive spin on things, but I would like to see a greater sense of urgency," Democratic Sen. Greg Leding said.

Hutchinson has cited progress with the state's testing positivity, but has acknowledged it needs to improve in other areas such as hospitalizations and rate of new cases. Hutchinson has continued resisting calls to roll back some of the state's reopening, saying he's relying more on personal responsibility.