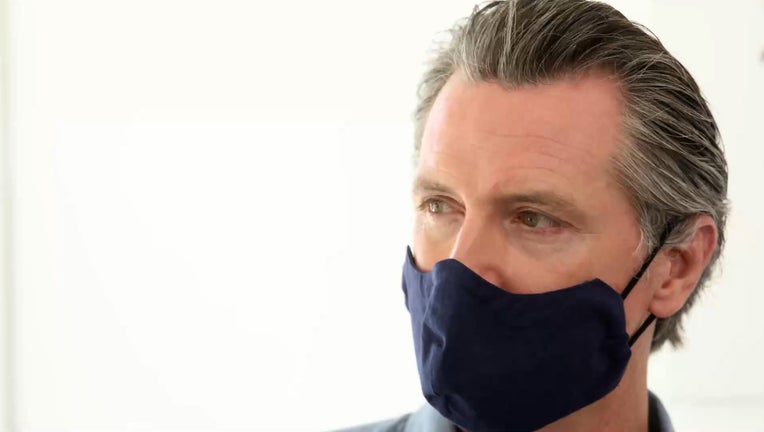 SACRAMENTO, Calif. - California Gov. Gavin Newsom gave his regular address on Monday as state firefighters were still battling wildfires, California’s death count from the coronavirus surpassed 15,000 and a weekend announcement that the state will not accept new unemployment claims for the next two weeks so that they can "reset" the mounting backlog of cases.

Johns Hopkins University put California’s death toll at 15,026, the fourth highest in the country. New York has suffered by far the most deaths -- 33,081 -- followed New Jersey, which has about half as many. Texas is third.

California, which is the nation’s most populous state, has the most confirmed virus cases in the U.S. with about 775,000, but key indicators have fallen dramatically since a spike that started after Memorial Day weekend prompted statewide shutdowns of businesses.

Still, Newsom stressed the positive, noting the statewide positivity rate has been 2.8% over the last seven days and a 23% decrease in COVID-19 hospitalizations over the last 14 days.

Newsom then pivoted to another weekend announcement: No new unemployment claims will be processed for the next two weeks. Anyone who files new unemployment claims until Oct. 5 will be asked to provide contact information so the Employment Development Department can reach out after the two weeks is over. Californians who are already in the unemployment system are not expected to see an interruption in their payments during the two-week period.

"I didn't want to wait another day to start this reset period to get this system back on its feet," Newsom said, adding that the antiquated computer system used by EDD had to go.

"COBOL should go into the wastebin of history," Newsom said of the 60-year-old programming language still used by the Employment Development Department.

Newsom said California hopes to reduce the number of about 600,000 Californians who are part of a backlog where their unemployment claims have not been processed by the state’s Employment Development Department for more than 21 days. There are also 1 million cases where residents received payments but are awaiting a resolution to their modified claims.

The Employment Development Department has been hampered throughout the pandemic by outdated technology at a time when California is seeing an unprecedented wave of unemployment claims. While the department estimates that about 2.1 million residents were out of work statewide last month, California’s unemployment rate fell to 11.4% in August, down from 13.5% in July.

Newsom said that the state is working on a new automatic ID version and making the online access to benefits easier and simpler.

And in terms of wildfires, Newsom noted this year's unprecedented numbers. Last year, 157,000 acres burned. So far this year, 3.6 million acres have burned, with fire season formally starting in October.

Currently, the biggest wildfire is an enormous blaze that churned through mountains northeast of Los Angeles and into the Mojave Desert was still threatening homes on Monday.

At 165 square miles, the Bobcat Fire is one of the largest ever in Los Angeles County and it has burned for more than two weeks. It’s just 15% contained.