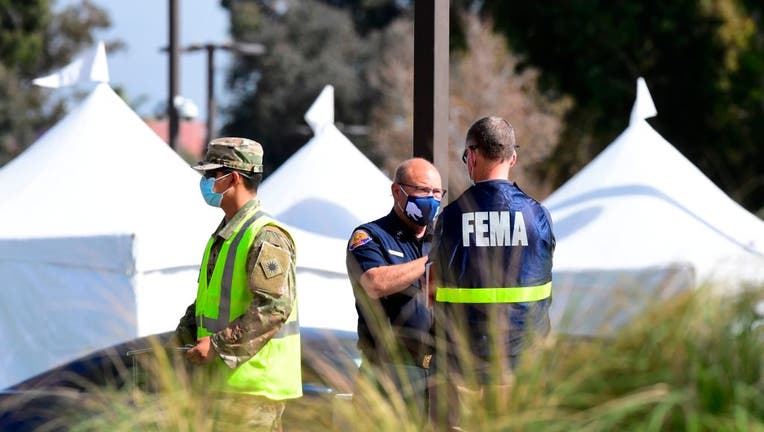 Members of the National Guard and officers from the Federal Emergency Management Agency (FEMA) on site on the opening day of a new mass Covid-19 vaccination site established between the federal government and the state on February 16, 2021 on the cam

Officially branded the RingCentral Coliseum, Newsom had this to say about the latest development in the battle to end the COVID-19 pandemic: "We are proud to continue operations at the RingCentral Coliseum site with our local and federal partners," said Governor Newsom. "I’d like to thank our partners for stepping up to support the Bay Area community — especially those hit hardest by this pandemic."

Per the agreement, current staff and equipment at the site will remain in place for the next four weeks through May 4, the governor's office said. The two counties will jointly operate the site once state and federal emergency management personnel leave.

The state will provide half of the site's vaccines through a third-party administrator the other half will come from Alameda and Contra Costa counties. The site will be capable of administering 6,000 doses a day.

Federal Emergency Management Agency initially said it would only run the site for eight weeks and planned to close up shop on April 11. But mounting pressure to extend the site came at a time when vaccine eligibility widened to people 50 and older, and will soon open to those 16 and older on April 15.

It was reported on Monday, during Vice President Kamala Harris' visit to California, which included stops in Oakland, that FEMA was in discussion with state officials to keep the site open.

California Gov. Gavin Newsom announced on Tuesday, April 6,2020, that the mass vaccination site at the Oakland Coliseum will remain open.

Between the Coliseum site and a similarly-run site in Los Angeles, as of April 5, CalOES and FEMA have given 68% of the vaccines to targeted underserved communities, the governor's office said.

The sites have been up and running since February.

Vaccine appointments at the Coliseum can be made through the state's My Turn scheduling tool at https://myturn.ca.gov or by calling (833) 422-4255.