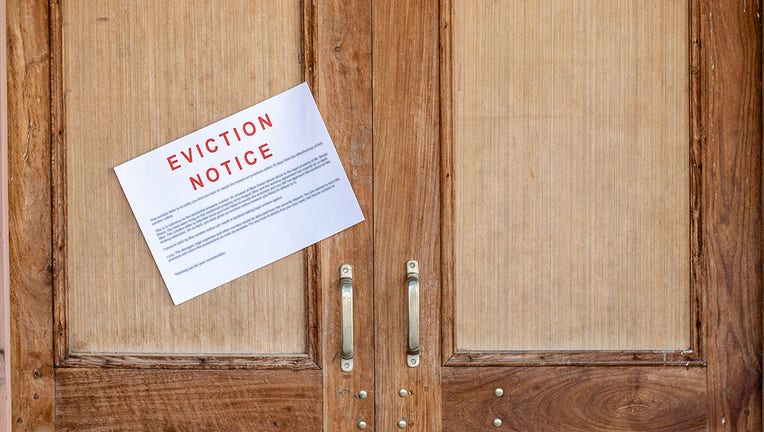 At a news conference, Newsom signed into law 27 of 31 housing bills on top of California's commitment to spend $22 billion on housing and preventing homelessness.

Just one of the bills, SB 791 authored by Dave Cortese (D-San Jose), will  expedite the construction of affordable housing on local government surplus land through the creation of the California Surplus Land Unit.

His signature comes as a statewide eviction moratorium is slated to end on Friday.

But officials in California are rushing to make sure tenants with unpaid rent know they can still stay in their homes after that date — but only if they have applied for assistance from the state.

Oakland Mayor Libby Schaaf emphasized cities such as hers have stronger protections than the state's: Oakland's eviction moratorium has no end date.

State Sen. Nancy Skinner (D-Berkeley) added that while Alameda County eviction protections are not as strong as Oakland's, residents in the county do not have to face the Sept. 30 deadline.

California is using billions of federal dollars to pay off up to 18 months of most people’s rent dating back to April 2020, the first full month of the state’s stay-at-home order because of the coronavirus. To qualify, people must earn 80% or less of their area’s median income and must have been affected by the pandemic — a nondescript requirement nearly everyone can meet.

Through Thursday of this week, state law automatically bans landlords from evicting people for unpaid rent. But beginning Friday, certain tenants with unpaid rent can only be protected from evictions if they have applied for assistance.

As of Monday, more than 309,000 households have applied for assistance, asking for nearly $3 billion. The state has paid nearly $650 million to about 55,000 households so far, and they have approved another $950 million in assistance that is in the process of being paid.

Now, however, California stands to get even more money — as much as $1.8 billion, state officials said — in a second round of funding, ensuring the state will have enough money to continue paying off people’s unpaid rent.

The federal eviction moratorium ended last month. Last week, federal officials said state and local governments had allocated more than 16.5% of the money available for rental assistance in August, up from 11.1% in July.

In California, there is no deadline to apply for the money. The state will pay off rent tenants owe and they will even preemptively pay people’s rent for the next three months. If tenants still can’t pay after that, the state will pay for another three months after that. But tenants can only receive 18 months worth of assistance, per federal rules.

Russ Heimerich, spokesman for the Department of Housing and Community Development, said the state would continue to pay people’s rent "as long as we have the money to do it."

California has a total of $5.2 billion to pay for all of this, with the money split between the state and local governments.

"Applying for rental assistance is the best way to protect yourself from being evicted," Lourdes Castro Ramírez, secretary of the Business, Consumer Services and Housing Agency, said during a news conference on Monday.

But tenant advocates worry many renters won’t know about the protections. Tina Rosales, an attorney and policy advocate for the Western Center on Law and Poverty, said some tenants don’t know they can halt an eviction proceeding by simply completing an application for assistance and many don’t have lawyers to help them. She’s afraid some might get spooked once the moratorium ends and "self-evict."

"Yes, (state law) does have protections, but those protections rely heavily on a legal system that is not tenant friendly at all," she said.

The state Legislature included $40 million in this year’s budget to pay for lawyers to help renters and homeowners avoid eviction and foreclosure, with a commitment to spend an additional $40 million over the next two years.

Some state lawmakers, including Assemblyman David Chiu, had pushed to extend the state’s eviction moratorium beyond Thursday’s deadline. But Chiu said there "wasn’t consensus in the Capitol" to do that.

Debra Carlton, executive vice president for the California Apartment Association, said the eviction moratorium has hurt smaller landlords, many who haven’t received a rent check in more than a year and have struggled to keep up with taxes and insurance bills.

"We’re urging the state, obviously, to distribute funds more quickly, which it appears they are doing," she said.

Heimerich said the government has paid for statewide radio and TV ads to tell tenants about the rental assistance program. The state also simplified the application process, making it easier for tenants to apply. After a slow start, Heimerich said California trails only Texas in the amount of assistance paid to date.

That could change soon, as Heimerich said he expects the state will soon process $100 million in rental assistance per week.

"We definitely don’t want people to panic because there are still protections," Heimerich said. "What we do want people to know is they have to take more positive, affirmative action and actually apply for relief in order to be protected."

KTVU staff contributed to this report.