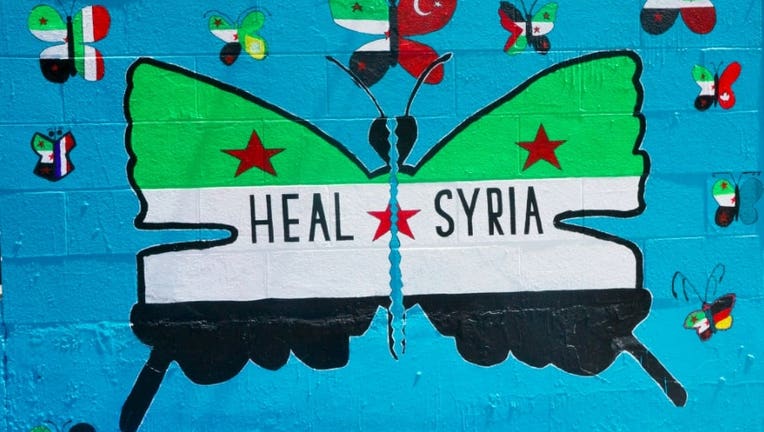 "Heal Syria," a 2014 mural by naval veteran Amos Gregory, was one of the four murals destroyed. (Photo: Bay City News)

SAN FRANCISCO - Murals painted by military veterans in an alley in San Francisco's
Tenderloin neighborhood have been painted over by crews from a local business improvement district, damaging a nearly decade-old project that has brought pride to the neighborhood.

Shannon Street, an alley near Geary and Taylor streets a few
blocks west from Union Square, has also come to be known as Veterans Alley as a result of the mural project started in 2011 by Amos Gregory, a U.S. Navy veteran from the Gulf War era.

Painting crews associated with the Union Square business
improvement district earlier this month responded to a request from a property owner in the alley to remove hateful graffiti such as swastikas that had been painted there, according to the district's executive director Karin Flood. 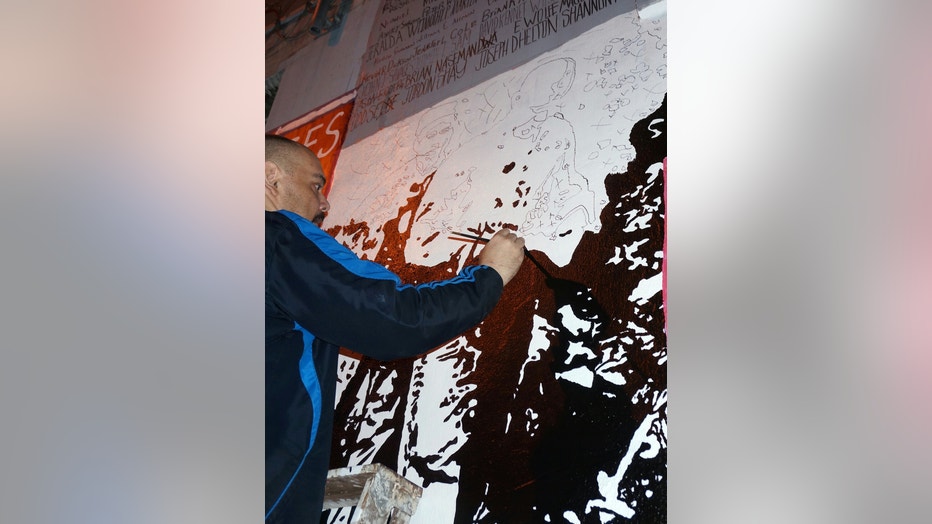 Gregory said, however, that the painters also went over murals
unaffected by the vandalism, including some painted 15 feet above street level to prevent damage from graffiti, and did it without contacting him or anyone else associated with the project.

Four murals in all are gone on two separate buildings, while others remain elsewhere in the alley, he said.

One of the painted-over murals, done by Air Force veteran Ricky
Chapman, depicted Capt. David Hrdlicka, a pilot shot down over Laos in 1965 who was taken as a prisoner of war there and never found.

Chapman said he knows Hrdlicka's wife and made the mural at her request. Visually impaired after suffering two strokes, Chapman said he worked on the mural off-and-on over 14 months, climbing up a ladder to work on it with his face inches from the wall.

"I thought I was trying to put something up there that had some
relevance," he said. "If you're going to suppress it, paint over the whole damn alley."

The Union Square BID was the first business improvement district
created in San Francisco in 1999 and provides property tax-funded services such as graffiti and sidewalk cleanups, community ambassadors and overnight security patrols.

The Union Square BID's 10-year reauthorization by the city last
July expanded its territory to now include 620 parcels and a portion of Veterans Alley, with an annual budget of more than $6 million. The rest of the alley is part of the adjacent Tenderloin Community Benefit District.

Gregory said he hasn't gotten an explanation about why the murals were painted over, but said it may have just been an overzealous painting crew or misunderstanding with an organization unfamiliar with the alley newly in its territory.

Flood said she was unaware of any painting that went beyond what was requested of the Union Square BID by the property owner who reported the graffiti.

"We certainly did follow protocols on our end," she said. "It's a
tricky time right now, everyone's social distancing. We're trying to do the best we can."

Michael Nulty, executive director of the group Alliance for a
Better District 6, the Board of Supervisors district that includes the
Tenderloin, criticized the Union Square BID for its handling of the murals, especially given they were in what he said was "an alleyway that was left as a discarded part of the neighborhood" before the veterans' project.

"Blacking out already established public art is not cool," Nulty
said. "It was their staff that did the damage."

Nulty said it appeared to be a case of "the people that have will
do what they want."

Gregory said the mural destruction has distracted from other
assistance work he is doing with local veterans amid the COVID-19 pandemic, including connecting unhoused veterans with nonprofits like Swords to Plowshares and coordinating with community groups to get more Tenderloin residents tested for the virus.

"We want to be left in peace to concentrate on the work at hand
without feeling even more vulnerable," he said.

More information about the veterans' mural project can be found at
www.vetsalley.org.