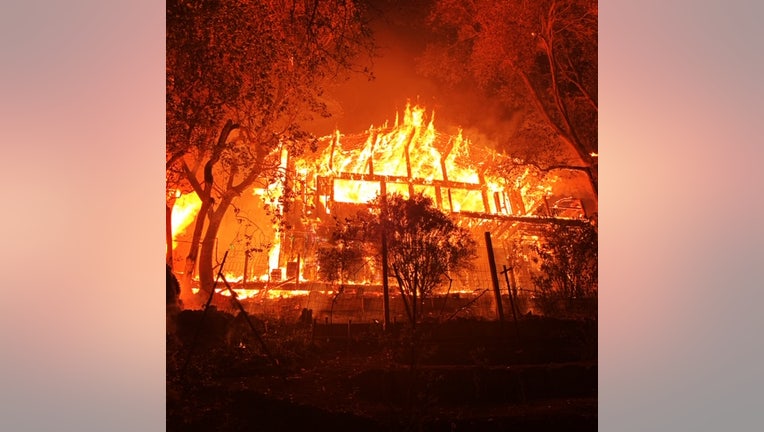 Home on fire in Napa on the Silverado Trail just outside St. Helena. Via Napa County Sheriff.

NAPA, Calif. - The Napa County Sheriff’s Office posted photos and video of a hellish scene of fires raging on forested hillsides and devouring homes as the Glass Fire continues to gobble up earth and structures.

However, in one lucky instance, the sheriff tweeted that Lt. Patrick McMahon on Tuesday was able to save a man's burning home on Crystal Springs Road.

About 70,000 people were under evacuation orders in the wine region where the Glass Fire has incinerated dozens of homes along with winery installations and other buildings.

The Glass Fire chewed up roughly 80 square miles of earth and remained at 2% contained as of Wednesday night.

About 150 miles to the north, there was no containment reported for the Zogg Fire, which also erupted during Sunday’s high winds and grew quickly, killing three people.

The Glass and Zogg fires are among nearly 30 wildfires burning in California. Fire-related deaths total 29.

The National Weather Service said the weather conditions would last for several days due to high pressure centered over the state. Heat advisories were in effect or pending along about three-quarters of the California coast and many areas had poor air quality due to smoke.

The Associated Press and Bay City News contributed to this report.

The wake of the Glass Fire

Reporter Allie Rasmus is at St. Helena Highway and Schramsberg Road, where, up the hill, she could see where the Glass Fire already passed through