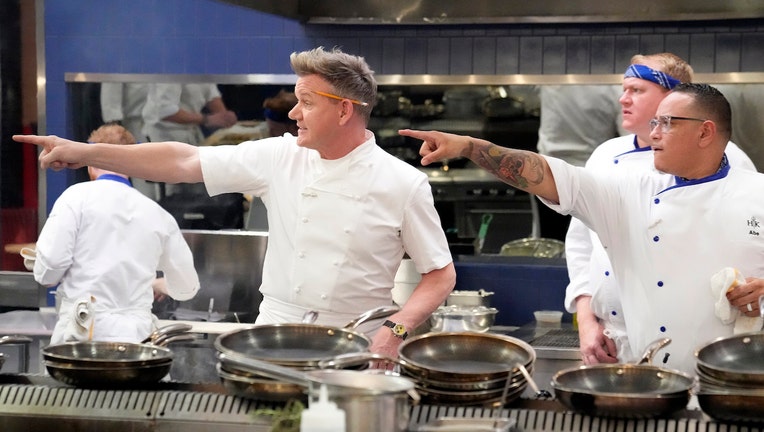 CHICAGO - Welcome back to "Hell’s Kitchen" recaps! This week, season 20 winner Trenton and soon-to-be-wife Macy enter the kitchen and challenge the contestants to create the menu for their upcoming wedding. Miss a week? You can read our recaps, starting with our recap of the season 21 premiere, and watch On Demand, on FOXNow, on Hulu and on Tubi, FOX’s free streaming service. This television station is owned by the FOX Corporation.

This season’s been relatively light on drama, with both teams finishing the majority of their dinner services and tension springing primarily from Billy’s big (but harmless) personality. That changes in this week’s episode, which finds multiple contestants cracking under the mounting, unrelenting pressure of this competition.

What makes "Hell’s Kitchen" interesting in the larger realm of cooking competitions is that it’s not about demonstrating range or creativity so much as consistency — to win, the cooks must prove they can reliably make the same dishes night after night as chaos explodes all around them. It’s a test of will as much as anything, and some of the most creative chefs in the world wouldn’t survive a week on a line, let alone with cameras watching their every move.

Abe is the first one we see snap in this episode, which begins with him telling Billy that he doesn’t get the respect he believes he deserves. Some of his resentment stems from the insecurity of having to compete with so many cooks half his age, but it’s also rooted in class anxieties. "I’ve never had anything," he says through tears. 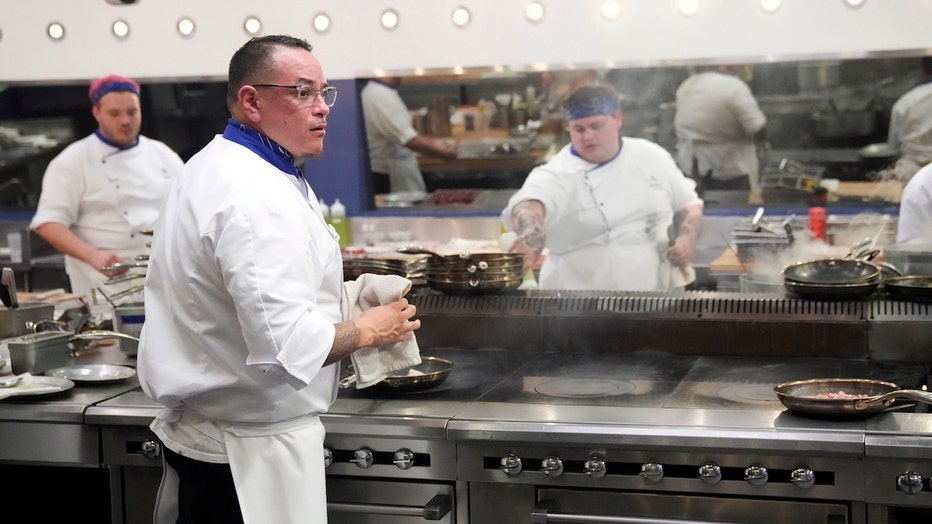 Later, while arguing with Alex, he makes a comment about how he feels judged for not being "as educated" as some of the other cooks. (For as long as there have been cooking shows, there has been the divide between chefs who went to culinary school and chefs who worked their way up from being dishwashers.) Anyway, Abe’s anger is evident — "I wanna break his bitch ass down," he says of Alex — and the blue team suffers for it.

We get a bit of lightness before the storm clouds fully take shape, however. A wedding has come to Hell’s Kitchen and Ramsay introduces the daily challenge by showing old wedding photos from the contestants. Everyone gets emotional and laughs at Ramsay’s hair in his own wedding photo. It’s sweet.

The groom is Trenton, who won season 20 of "Hell’s Kitchen" and, according to Ramsay, is still a head chef at one of his Las Vegas restaurants. He’s finally getting married to his fiancé, Macy, who he proposed to after winning. 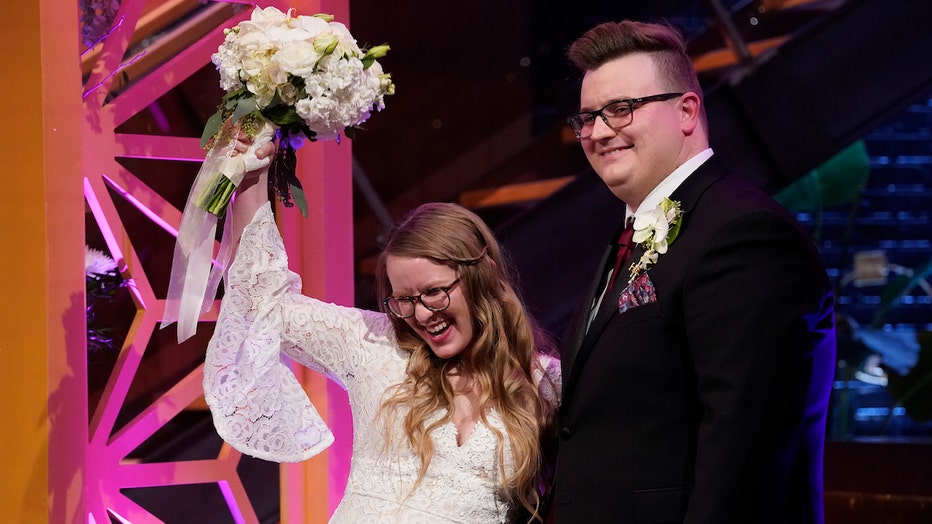 The cooks will be making the food for their wedding party. Their challenge is to prepare three appetizers — scallops, shrimp pasta and flatbread — as well as steak, chicken and seafood entrees. The blue and red teams will square off on each dish and the winner’s preparation will be incorporated into the dinner menu. As usual, whichever team gets the most wins evades punishment.

WATCH FREE ON TUBI: The star-studded ensemble rom-com "Valentine’s Day" — get the app

Trenton and Macy express their love for Southern comfort food and ample seasoning and spice, and the cooks deliver. Billy scores points with a pan-seared scallop served with a sweet corn puree and pickled okra, while Sommer gets a win with a blackened halibut with bacon cream and collard greens. Alejandro, meanwhile, ducks outside the box with a Spanish-inspired flatbread with chorizo and clams. 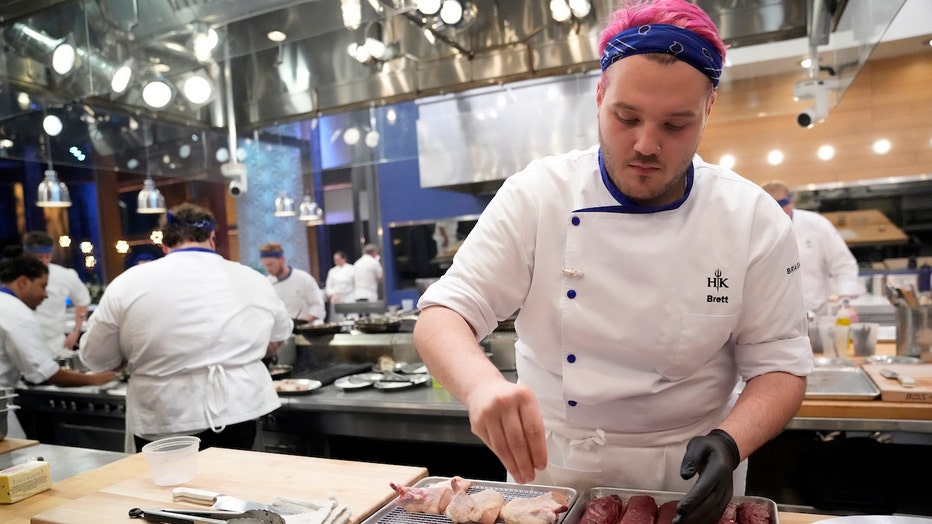 It’s Brett’s twice-baked chicken with braised collards and mustard greens that cinches the win for the blue team. He beats Alyssa, who, despite getting high praise for her Cajun-style carrots, begins her spiral into exhaustion. That the red team is tasked with making a six-tier Irish cream cake for the wedding doesn’t help matters.

WATCH FREE ON TUBI: "Anthony Bourdain: A Cook’s Tour" — get the app

The blue team’s prize is a meal at one of Suzanne Goin’s many heralded restaurants, as well as a trip to a "rage room," where guests are given goggles, baseball bats and lots of things to break. An extended shot of the boys taking bats to a toilet is easily this episode’s high point. 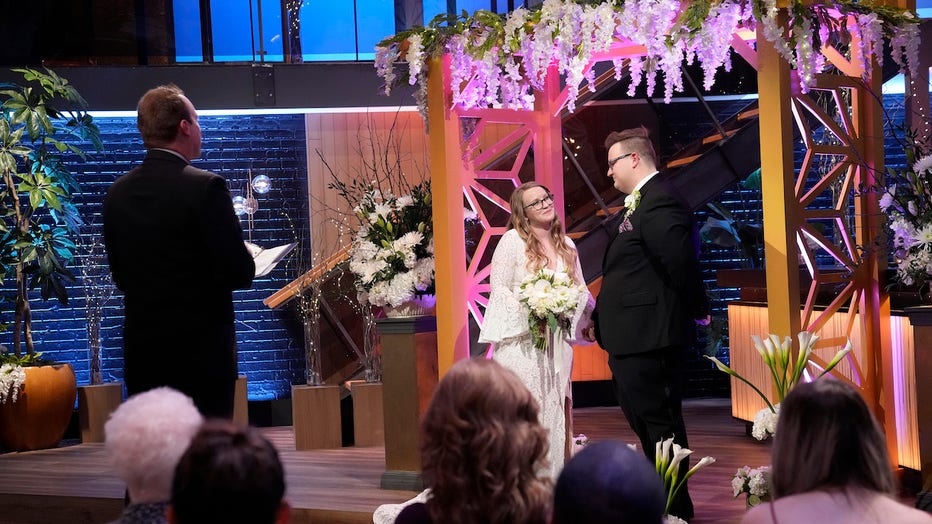 As dinner service approaches, Billy talks about "bouncing back" for probably the 300th time this season. He also sometimes says "bro" like "broo."

Trenton and Macy’s wedding dinner is attended by numerous "Hell’s Kitchen" alums, all of whom take a perverse delight in watching Ramsay scream at people that aren’t them. And there is plenty of yelling. This is a disastrous dinner service. Abe undercooks scallops, then overcooks them. This being his dish, Billy tries to assert himself into handling its preparation, but Abe doesn’t want him to, saying it’s because Billy had never worked the fish station before. Sadly, when Billy does take over, he makes the same mistakes, undercooking and overcooking. Cheyenne, the red team’s dark horse, is called over to the blue team’s side to prepare them correctly.

And that’s just the beginning. Alejandro’s steak is too rare. Multiple pieces of chicken turn up raw in the middle. "You should be embarrassed," Ramsay says after booting them from the kitchen. He tells them to pick two cooks to be up for elimination. 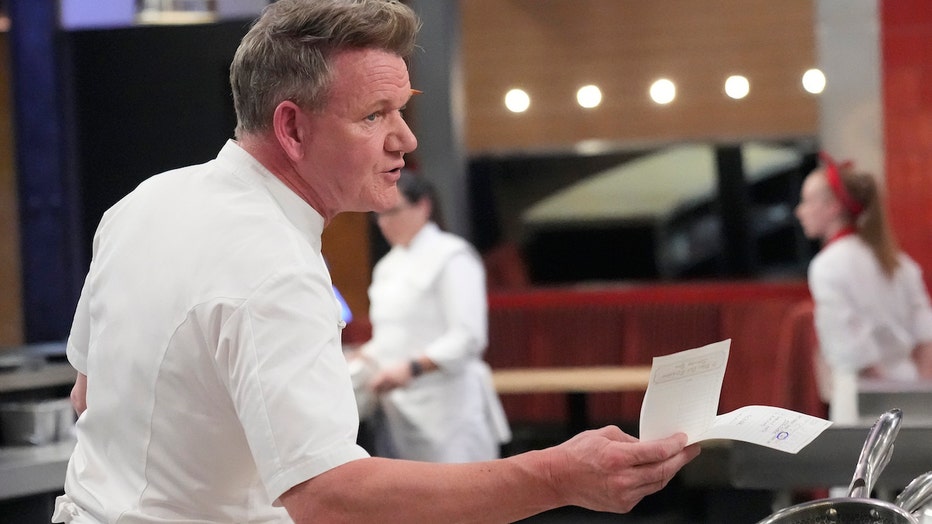 The red team is having plenty of problems of their own. Alyssa, who continues to disassociate (Tara calls her "scatterbrained"), makes numerous mistakes on garnish. Sommer, meanwhile, serves up as much raw chicken as the boys. Ramsay makes an "in sickness and in health" joke that, despite not making sense, gets the point across: They’re going to poison the newlyweds. He kicks them out, too, ordering them to also put up cooks for elimination.

WATCH FREE ON TUBI: Gordon Ramsay's "24 Hours to Hell and Back" — get the app

Things get heated as the blue team debates who to put on the chopping block, and Abe nearly gets physical with Alex, who tries to tell him that none of this is "personal." Abe relays his feeling that the rest of the team is working against he and Billy, though he’s quick to throw Billy under the bus for the scallop station screw-ups Still, the blue team votes to put him and Billy up for elimination. (I would’ve picked Abe too, but only for saying he was dropping halibut "like panties.") 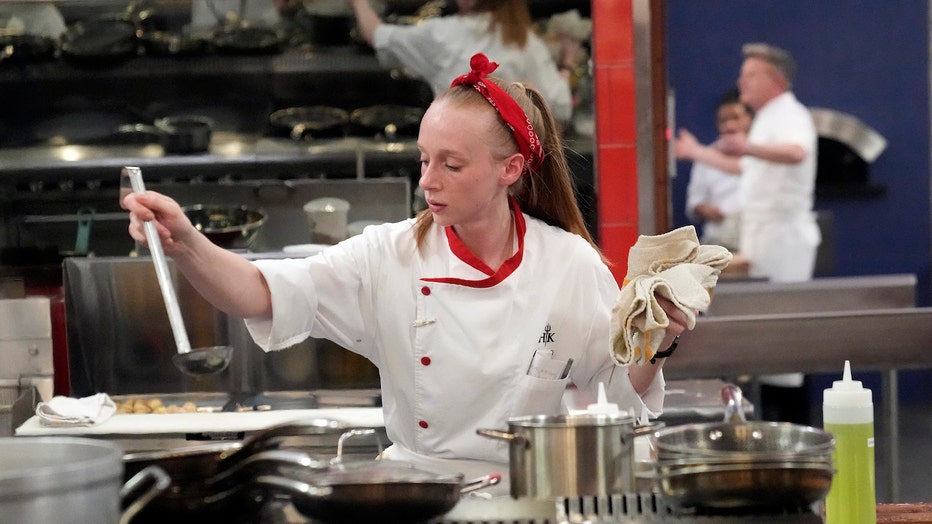 The discussion is not nearly as heated among the women. Sommer and Alyssa were clearly the weak links.

"Was that a wedding or a funeral tonight?" asks Ramsay as the teams put forth their losers. The red team tells him they’ve chosen Sommer for "rushing her proteins" and Alyssa for lacking confidence and not communicating. The blue team says they’re nominating Abe for "putting them behind" and Billy for failing to take charge sooner and "coming up short when he did."

As usual, Billy says he’ll "bounce back" and Sommer says she had a "bad day." Alyssa promises to be more "headstrong" if she sticks around, while Abe defends his decision to take control of the fish station by saying he wasn’t confident in Billy. Ramsay is unmoved, choosing Billy, who’s clearly out of his depth, and Alyssa, who’s obviously checked out, for elimination.

"My boy Abe kind of snaked me out tonight," Billy says on his way out. He’s not wrong.

Ramsay, clearly displeased with their performance, urges the chefs to "start thinking individually how you’re going to redeem yourselves tomorrow." It’s only going to get harder from here.

About the writer: Randall Colburn is a writer, editor, and podcaster based in Chicago.

"Great British Bake-Off" icon Mary Berry cooks up comfort food in her cozy kitchen, casually coaxing curious cooks into concocting Berry’s favorite recipes. (No, we will not apologize for any of that alliteration.) One season, eight episodes.

How to watch "Hell’s Kitchen"

"Hell’s Kitchen" airs Thursdays at 8 p.m. EST on FOX. You can also watch On Demand or stream online via FOXNow. 13 seasons, including much of the current season, are streaming on Hulu. And Tubi’s Gordon Ramsay channel offers many of Ramsay’s seemingly infinite shows, including "MasterChef," "MasterChef Junior" and "Next Level Chef," his latest.