While the movement to recall Gov. Gavin Newsom is moving along, it will still take several more months, and steps, to reach a final decision. KTVU Political Reporter Greg Lee has the details.

SACRAMENTO, Calif. - As the list of candidates who want to replace Governor Newsom grows, the process towards scheduling an expected recall election continues.

It's near certain Newsom will face a special election this year, but the question now, is when? Many analysts have estimated a November election, but now an earlier timeline is being floated.

"That’s going to be determined by a series of actions the legislature takes," said Newsom after being asked about an expedited timeline. "Department of finance takes, Secretary of State takes, and they’ll make that determination. Period, full stop." 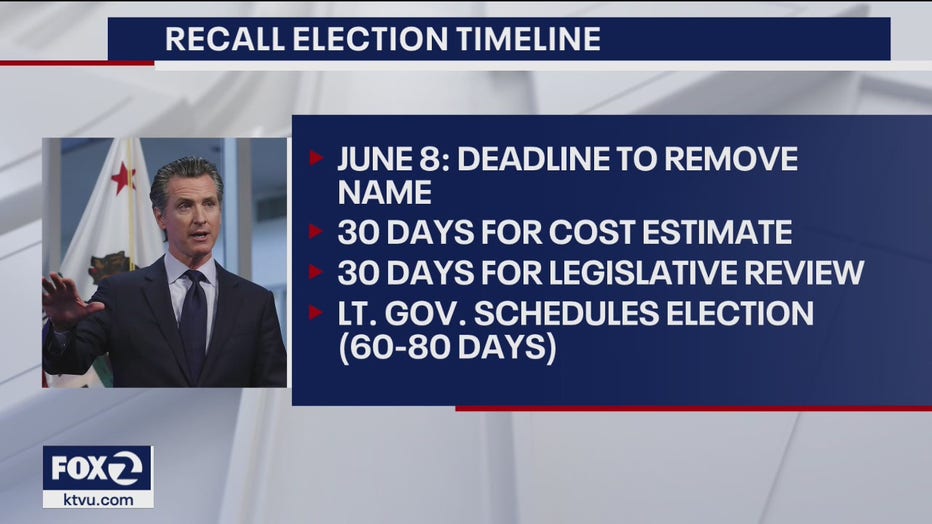 The governor was asked about the timing of the election after State Senator Steve Glazer (D-Orinda) tweeted that Newsom's best opportunity to beat the recall, is an early election.  Here's what's next in the process:

After that, the Secretary of State will certify the signatures and the Lieutenant Governor must schedule a recall election between 60-80 days later.

Some experts estimate the earliest it might occur is in late-August, early-September.  Both sides are saying publicly, they're not concerned about timing.

Newsom's campaign spokesperson Nathan Click released this statement: "Our focus is on winning and we’ll beat the republican recall whenever the election’s called. That’s our approach."

Anne Dunsmore of Rescue California, one of the groups spearheading the recall effort, said "Bring it on. We got him either way."

Sonoma State political science professor David McCuan said there are things both sides need to consider about the timeline.

"Given the budget news, given the California rebound and recovery, what is happening; sooner is better than later for Gavin Newsom, the governor," said McCuan.

McCuan said a summer election would help the governor steer clear of the impact of variables like potential power shutoffs, wildfires and the ongoing drought.

However, he says democrats need to tread lightly if they push to move up the date.

"If democrats push this forward too fast there is the issue that recall proponents will use that as a talking point, " said McCuan.  "They'll say 'here again is a governor where the rules don’t apply."