OAKLAND, Calif. - Volunteers, activists and homeless community members used the long MLK weekend to build unsanctioned tiny homes in an existing encampment in Oakland behind a Burger King to give the unhoused some more permanence in their life.

Spearheaded by Needa Bee, founder of The Village, the goal is to create 11 shelters and a communal kitchen for the unhoused people already living behind the fast food restaurant at E. 12th Street.  The name of this median strip will be the “Right To Exist Curbside Community.” At least three 8-by-12-foot structures were finished on Sunday by roughly 100 volunteers who raised about $8,000, though the labor and many of the materials were donated. Crews planned to be out Monday as well.

One small wood shack was painted in pink and purple with a slogan that reads, “Housing and Dignity for All.”

“We intend to continue to build emergency temporary shelters for our people living curbside as long as this affordability crisis and the homeless state of emergency it created exists,” said Bee, who lives in a camper with her 17-year-old daughter. “We hope we can be a model of what community led approaches, co-governed curbside communities, and autonomous curbside communities should look like.”

The number of Bay Area evictions decline, but ramifications 'catastrophic' 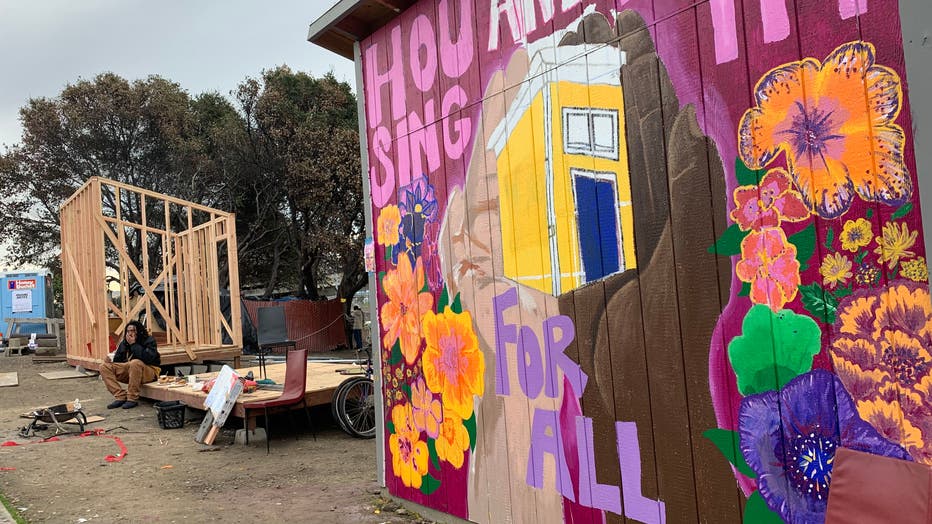 Bee told KTVU on Sunday that she has been helping to build tiny homes for the last four years, long before the Moms 4 Housing group took over an empty Magnolia Street home in Oakland. So far, her group has created three tiny home villages, all of which were eventually razed the city, and four “upgraded” communities, like the one her crew was working on this weekend.

Jake Rosen rode his bike to the site to volunteer. "There's just so many people in need of help and the services are just not available for them," he said.

According to the latest statistics by EveryOne Home, there are roughly 4,000 homless people in Oakland, a 47 percent increase since 2017. 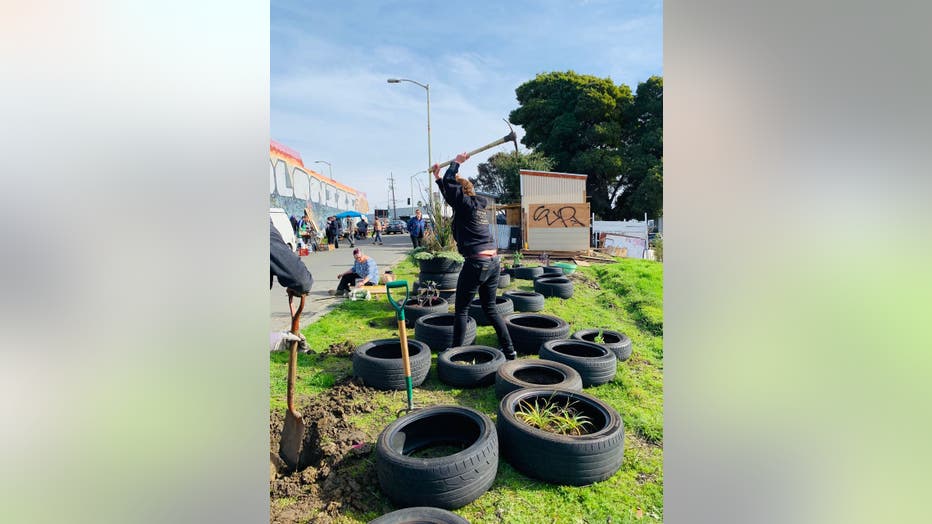 The name of this median strip will be the “Right To Exist Curbside Community.”

City crews do indeed “clean and clear” unsanctioned curbside communities. But that’s because the living situations often pose health hazards, city officials say. As per city policy, homeless encampments aren’t razed until the people living there are offered Tuff Sheds as a temporary living solution. Oakland city leaders have said they are especially cognizant of fire safety hazards, and not turning a blind eye, since the deadly 2016 Ghost Ship fire that killed 36 people in an illegally converted warehouse.

Bee and her supporters argue that they are not satisfied with what Oakland Mayor Libby Schaaf has been doing for the homeless despite the financial and verbal committment to finding solutions to the epidemic plaguing the entire Bay Area.

Oakland has indeed committed resources to combatting homelessness and the mayor has called the situation a humanitarian crisis. In June, Oakland earmarked a portion of $44 million in the budget for items such as affordable housing, anti-displacement measures, homeless services and illegal dumping prevention. And as of the latest update from the city in October 2018, the city received $8.6 million through the state’s Homeless Emergency Aid Program to provide beds, shelter and services to an estimated 1,000 unsheltered residents in a year. Five Tuff Shed or “Community Cabin” communities now shelter those previously living in West, East and central Oakland as well as four RV sites with up to 150 spots across the city.

But Bee said she believes the Tuff Sheds are made with toxic materials and aren’t safe for residents to live in. And she also said that she feels the mayor’s approach is “cookie cutter,” because the city doesn’t get enough input from the people living on the streets. Much of the the money that's being spent on homelessness, Bee said, is actually wasted because it's not going in the right areas.

For her part, Bee said that she’s surveyed 300 homeless people on what they want to see in an outdoor community and The Village is designing the tiny homes with those specifications in mind. Bee said the upgraded encampment behind Burger King will have a community kitchen, a solar shower and a bicycle-powered washing machine, for example, as a result of these community surveys.

Derrick Cain is one of those homeless people. He said he lost his apartment of 11 years when his landlord raised his rent from $900 to $1,400 a month.

Having no permanant residence is a "health hazard, he said, "if you don't have clean water and housing.

He said he has hit "rock bottom" and he feels like he can't "rejoin society." He also can't sleep. "I literally have not been asleep in four days," he said.

Schaaf’s office on Sunday referred request for comment about this curbside community to the city. A city spokeswoman did not immediately respond for comment.

Desipite any city friction, Bee said that she hopes that her group will be able to access some of the $600,000 allocated in June to support self-governed and community supported encampments like Right To Exist. She said she would use it on portable toilets, trash services, clean drinking water and solar power.

Take a tour of the homeless encampment near the Coliseum

The crews from The Village chose to volunteer their time on the tiny homes during the MLK weekend.

Bee noted that before he was assassinated, Dr. Martin Luther King Jr. was organizing poor people across race, religious and geographic lines to fight for their civil and human rights.

“We are hoping...that other housed and unhoused neighbors would be inspired to unite and work together thru direct action to address the immediate needs of our people living curbside with humane, dignified, grassroots led approaches,” she said. “We join the efforts to reclaim and embrace his radical legacy this weekend.” 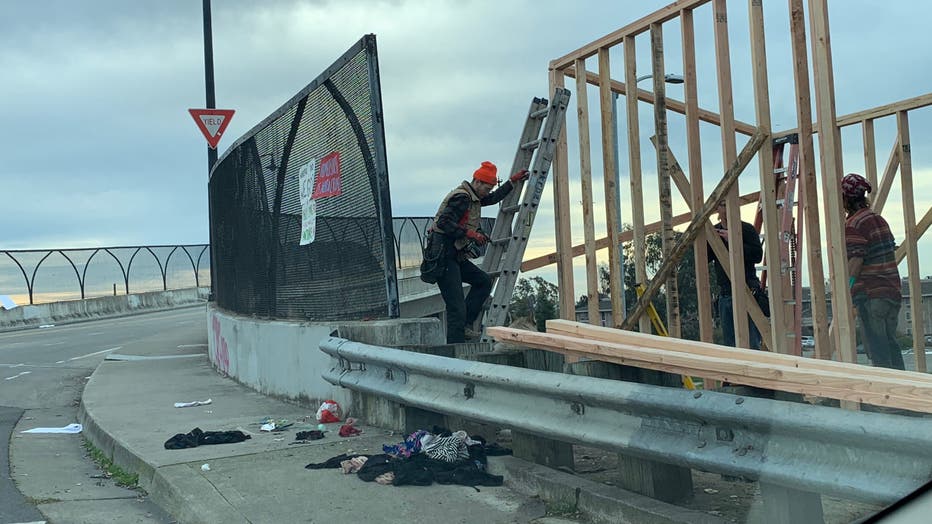 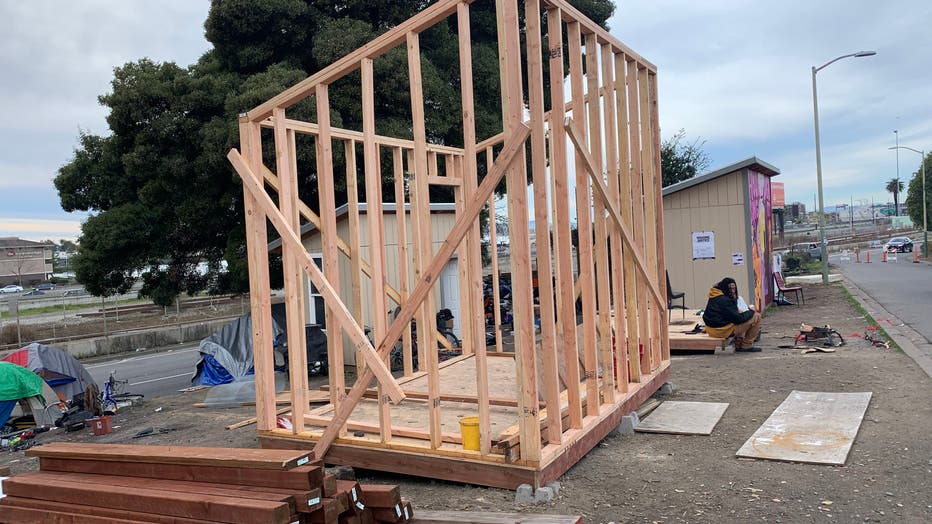 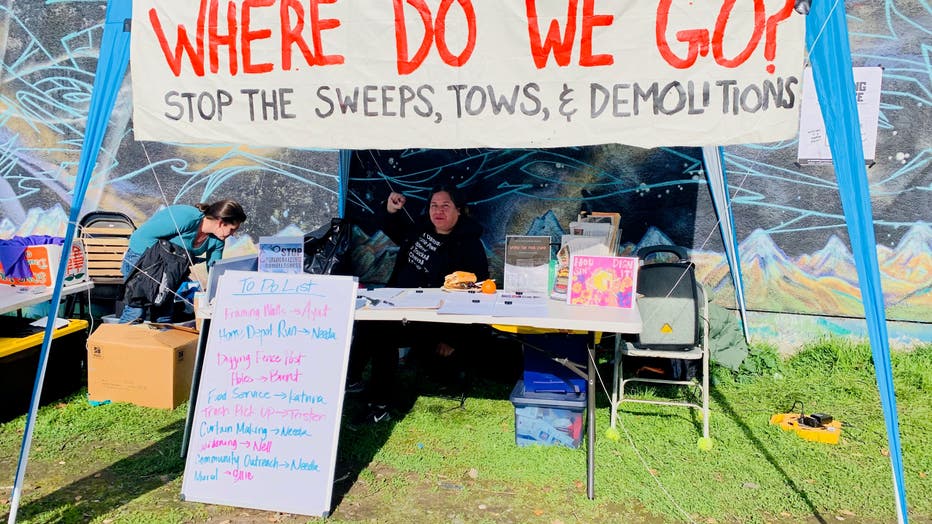 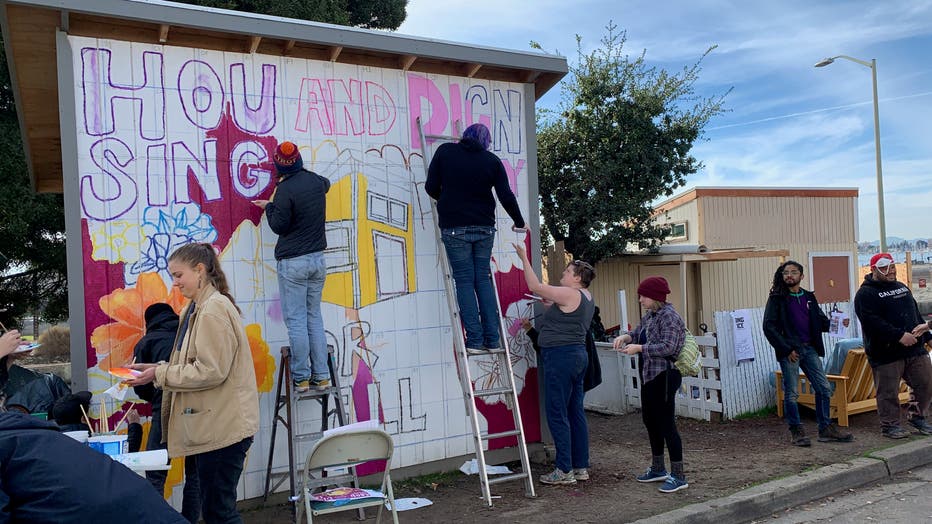 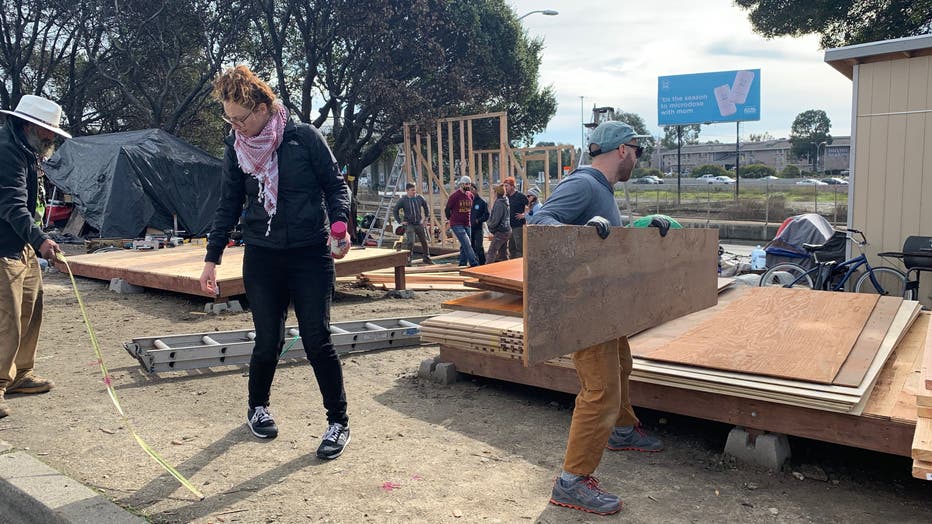