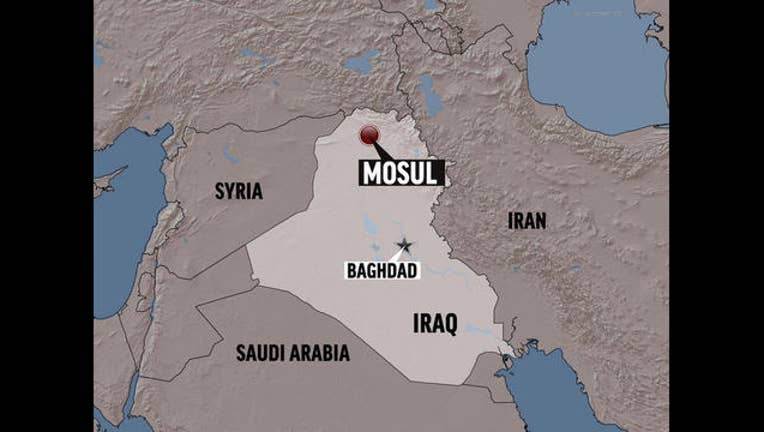 CAIRO (AP) -- After an American airstrike killed more than 100 Iraqi civilians in a house in the western part of Mosul in March, U.S. officials suggested the Islamic State group was to blame for the horrific toll, saying militants may have crammed the building with people, booby-trapped it with explosives, then lured in an airstrike by firing from the roof.

None of that happened, survivors and witnesses told The Associated Press, recounting the deadliest single incident in the months-long battle for the Iraqi city.

"Armed men in the house I was in? Never," said Ali Zanoun, one of only two people in the building to survive the March 17 strike. He spent five days buried under the rubble of the building, drinking from a bottle of nose drops, with the bodies of more than 20 members of his family in the wreckage around him.

Instead, Zanoun and others interviewed by the AP described a horrifying battlefield where airstrikes and artillery pounded neighborhoods relentlessly trying to root out IS militants, leveling hundreds of buildings, many with civilians inside, despite the constant flight of surveillance drones overhead. Displaced families scurried from house to house, most driven out of their homes by IS militants, who herded residents at gunpoint out of neighborhoods about to fall to Iraqi forces and pushed them into IS-held areas.

Increased use of bombardment has made the fight for Mosul's western sector, which began in mid-February, dramatically more destructive than fighting for its eastern half.

More than 1,590 residential buildings have been destroyed in western Mosul, based on analysis of satellite imagery and information from local researchers, the U.N. said last week.

Airstrikes killed 1,254 people in western Mosul in March and April alone, according to Iraq Body Count, an independent group documenting casualties in the war, cross-checking media reports with information from hospitals, officials and other sources. In comparison, an estimated 1,600 civilians were killed or wounded from all causes during the 100-day campaign to recapture Mosul's less densely populated eastern half, which ended in mid-January. Official figures from the Pentagon, which is slower in confirming deaths, are far lower: it said over the weekend that it has confirmed coalition airstrikes killed at least 352 civilians in Iraq and Syria combined since the campaign against IS started in 2014.

Human rights groups have pointed to looser rules introduced by the U.S. military in December that allow commanders on the ground to call in airstrikes, eliminating a layer of vetting of the targets by officers in Baghdad intended to limit civilian deaths. The U.S. military says the rule change has not played a role in greater civilian casualties and that the forces adhere to the same standards for carrying out a strike.

U.S. Central Command refused to comment on the March 17 strike until its investigation is finished and released.

The AP spoke to seven witnesses, including neighbors and people who had been in the house, all of whom said no one was forced into the building, where dozens had taken refuge, thinking it would be safe amid the fighting raging around them. It was not on a main road and it was only two stories tall, making it unlikely IS militants would use it as a sniper's position that might be targeted by an airstrike.

And, they said, the militants did not rig the building with explosives.

The building's owner, Tayseer Abu Tawfiq, was a businessman beloved in the neighborhood for his generosity to the displaced. Whoever showed up, he squeezed into his house, alongside his own 14-member family -- well over 100 people. A pregnant woman taking refuge there gave birth on March 15. The next evening, Abu Tawfiq's neighbor spoke to him and told him it wasn't safe having so many inside.

"I can't turn people away," Abu Tawfiq replied, according to the neighbor, Abdullah Khalil Ibrahim.

Zanoun ended up at the house after IS militants drove him, his three brothers and their families out of their homes in the nearby Ammel district. For a week, they bounced from house to house, at one point ending up together in one house. But IS fighters were using some of the rooms and they didn't feel safe. So Ali and one brother, along with his 10-member family, went to Abu Tawfiq's house, while the other two brothers went to one a few streets away.

He "was a humane person," the 50-year-old Zanoun said of Abu Tawfiq.  "Everyone there got along."

It was a small house, about 200 square meters (2,200 square feet), including the basement. The women crowded in there, while the men stayed in the two floors above.

Zanoun said he saw IS fighters in the streets around the house in the days before the airstrike and once saw a sniper on a roof about 300 meters (yards) away. But they never used Abu Tawfiq's house to fire from, he said.

There have been unconfirmed reports of a sniper. Mahmoud Ismail, whose sister and 13 other relatives were killed in the house, said he heard later from a neighbor that a single IS fighter shot a few rounds from the roof and ran. But even if that were true, Ismail said, Iraqi forces should have known the danger to civilians.

During his days under the rubble, Zanoun said he heard people and fighters outside, along with the sound of gunbattles and more airstrikes. He would call for help, and sometimes someone would shout that they would bring water, but no one ever did.

Finally, his brothers dug him out. He was rushed to a hospital in the northern city of Irbil, where he underwent multiple surgeries. It was only later that he learned that his family, including his two wives, Luma and Nadia, three sons, four daughters and a grand child born in the house just two days earlier were all dead.

"My entire family is gone," he said. "They melted. Not even a fingernail or a little bone found."

Western Mosul is a far tougher battleground than the city's eastern sector on the other side of the Tigris River.

Its neighborhoods are older, more densely populated and more tightly packed with houses. Its history also plays a role: former dictator Saddam Hussein distributed property to members of his military and intelligence agencies in the area, and after his fall in 2003 many of them joined the Sunni insurgency, al-Qaida and later the Islamic State group. The neighborhood where the Abu Tawfiq home was located was home to many of these Saddamists-turned-IS fighters.

The militants routinely use civilians as human shields and fire from residential buildings, according to U.S. and Iraqi officials, residents and human rights groups. They punch holes in the walls of buildings to create passages for fighters to move without being seen. They plant cars packed with explosives, which coalition forces have to bomb so troops can advance. Days before the March 17 strike, a missile hit an IS car bomb a few blocks away, destroying a nearby building and killing 27 people taking refuge inside.

But there are other differences. The fight for eastern Mosul was led mainly by U.S.-trained elite counter-terrorism units. In the west, they have been joined by federal police units with little experience in urban combat and the battle has relied more heavily on artillery and airstrikes.

The top commander of the U.S.-led coalition, Lt. Gen. Stephen Townsend, called western Mosul "the toughest and most brutal close-quarters combat I have experienced in my 34 years of service."

In the case of the March 17 strike, an Iraqi security official said it was called in when IS fighters were seen moving house to house along rooftops, firing at Iraqi forces. Militants were also seen in the streets nearby, said the official, who spoke on condition of anonymity to discuss operational details.

The military did not know civilians were crowded inside, he said.

Mosul's governor, Nofal al-Akoub, refused to comment, pending the outcome of the investigation.

"In battle, military mistakes are made. But all mistakes are ultimately because of the presence of Daesh" among the population, he said, using the Arabic acronym for IS.

Among those who took refuge in the house was a man named Khaled, who went there after IS militants forced him out of his own home at gunpoint. "They order you to leave and if you don't obey they shoot," said Khaled, who gave only his first name to protect relatives who still live in IS-held areas.

The militants often drove residents out of homes in areas that were about to fall to Iraqi forces and forced them into districts still under IS control. They would shoot anyone trying to escape to government-held areas, telling residents they must stay in the "land of the caliphate." But they didn't force the displaced into specific buildings, Khaled and the other witnesses said.

Khaled stayed at Abu Tawfiq's house for two days but left on the afternoon of March 16 because it was too crowded -- around a dozen families "and more coming," he said. His brother stayed with his 12-member family.

Khaled angrily dismissed the idea that IS booby-trapped the house. "Liars! Is it logical that I would stay in a house with explosives?" he asked. "Daesh didn't enter the house."

Days later, Khaled helped pull bodies from the rubble. Only three of his relatives could be identified. The rest were "pieces of burnt flesh."

On the morning of March 17, Ibrahim, Abu Tawfiq's next-door neighbor, woke up for dawn prayers. Around 8 a.m., as his wife was dishing out bowls of lentils for breakfast, he heard a jet flying low then everything exploded.

The walls and ceiling collapsed. Under the wreckage, he hugged his 2-year-old son. "The fire ate up everything around us," he said.

He survived, along with his wife and son, though Ibrahim's leg was badly burned and had to be amputated. A five-member family staying at their home was killed.

Ibrahim recalled visiting his neighbor the evening before and said there were no militants in the house. "Everyone in the neighborhood knew him," he said of Abu Tawfiq. "He would share his bread, his rice, everything. ... Why did they hit the house? We were waiting for the military to come liberate us."

Laud Salem Ali, another neighbor who had more than 100 people in his house at the time of the bombing, fled the neighborhood after the strike. On the way out, they passed one destroyed house after another -- 50 to 60 of them, he said.

"People were surprised to see us coming out alive," he said.