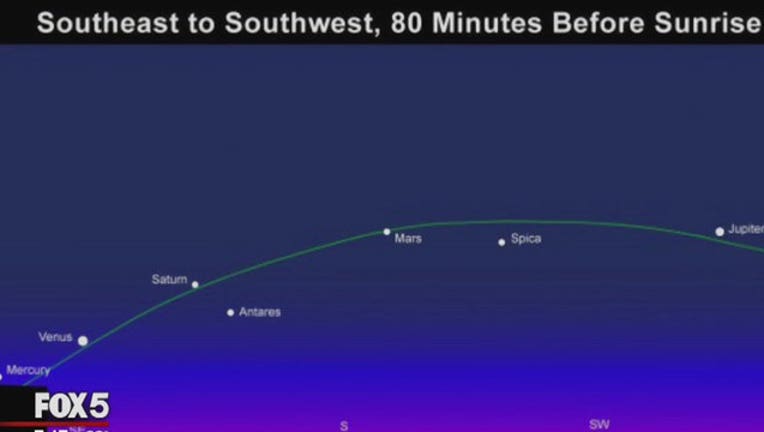 From early January 2016 to February 2016, five planets will be visible in the night sky at the same time to the naked eye.

NEW YORK (FOX 5 NY) - From early January 2016 to February 2016, five planets will be visible to the naked eye in the night sky at the same time.

This rare celestial alignment (last time it happened was more than 10 years ago) is visible about 45 minutes before sunrise.

Mercury, Venus, Mars, Saturn and Jupiter can be spotted if you know the right technique.

Professor Jason Kendall of William Paterson University in New Jersey says there is a trick to spotting the planets:

Close one eye, take your thumb at arm's length and slowly pass it over the planet or star in the sky. If the light dims out when your thumb passes over it, it’s a planet. If it quickly blinks, it’s a star.

The trick works well with Jupiter and Venus, but it's harder with Saturn and Mars because they are smaller discs.

Binoculars are always another option.

Professor Kendall says Venus will rise in the east while Jupiter can be spotted low in the sky in the south.

All the planets are the brightest things in the sky after the sun and the moon.