Car plows into protesters in Charlottesville at white nationalist rally

One person was killed and 19 were injured after a car crashed through protesters and into another vehicle on the street after white nationalist rally in Charlottesville, Virginia, on Saturday, August 12, 2017. (Credit: Twitter/Brennan Gilmore via Storyful)

CHARLOTTESVILLE, Va. - A jury has been seated in a civil trial to determine whether white nationalists who planned the 2017 "Unite the Right" rally in Charlottesville, Virginia, will be held responsible for the violence that erupted.

The process of choosing a jury was completed Wednesday, the third day of jury selection. Opening statements are scheduled Thursday in U.S. District Court in Charlottesville.

Hundreds of white nationalists descended on Charlottesville on Aug. 11 and Aug. 12, 2017, ostensibly to protest city plans to remove a statue of Confederate Gen. Robert E. Lee.

The federal lawsuit accuses some of the country’s most well-known white nationalists of orchestrating a conspiracy to commit violence against Blacks, Jewish people and others based on race, ethnicity, religion and sexual orientation. 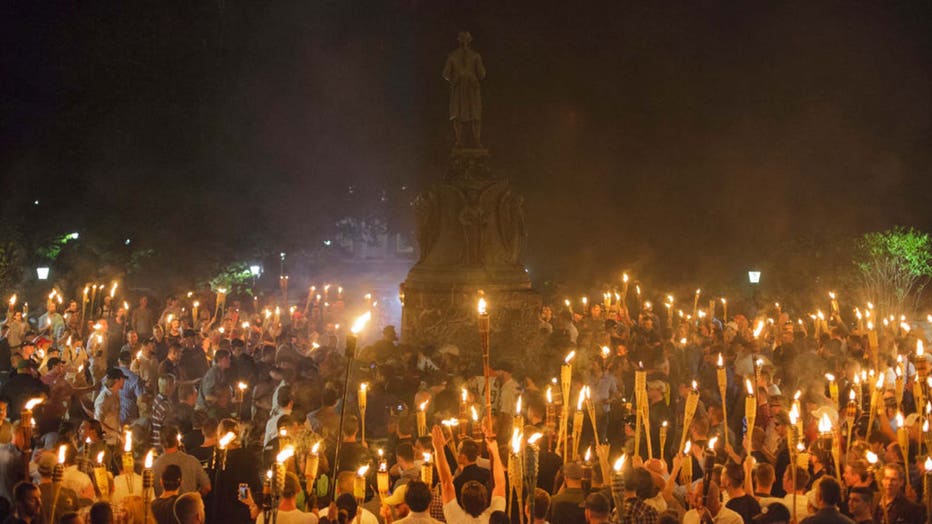 FILE - Neo Nazis, Alt-Right, and White Supremacists encircle counter protestors at the base of a statue of Thomas Jefferson after marching through the University of Virginia campus with torches in Charlottesville, Va., USA on Aug. 11, 2017. (Shay Horse/NurPhoto via Getty Images)

The lawsuit seeks monetary damages against two dozen white nationalists and organizations. It also seeks a judgment that the defendants violated the constitutional rights of nine plaintiffs who were physically injured or emotionally scarred by the violence.

The plaintiffs include four people who were hurt when James Alex Fields Jr., a self-avowed Hitler admirer, rammed his car into a crowd of counterprotesters, killing one woman and injuring dozens. Fields is serving life in prison on charges of murder and hate crimes. He is also named as a defendant in the lawsuit.

The trial is expected to last about a month.