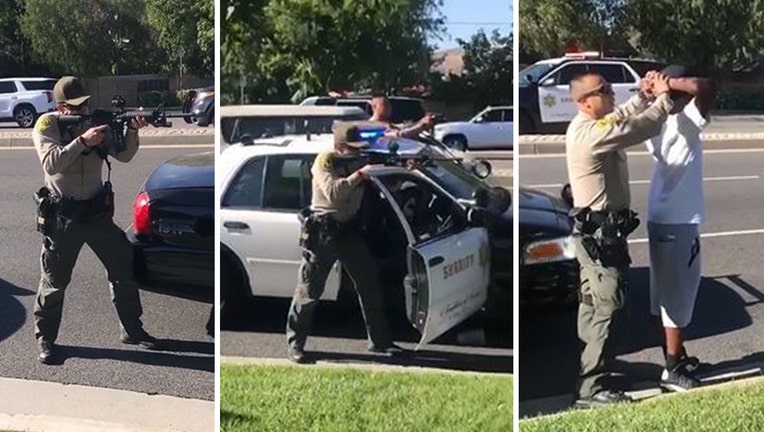 SANTA CLARITA, Calif. - The Los Angeles County Sheriff's Department is under fire after videos surfaced over the weekend that showed deputies pull out rifles on three Black teenagers they were called out to protect, despite pleas from bystanders saying, "They're the victims!"

The LA County Sheriffs Department is being criticized after it detained three unarmed black teenagers in a case of mistaken identity and pulled a rifle on them…video of the incident has now gone viral.

The incident, involving deputies with the sheriff department's Santa Clarita station, reportedly took place on Friday at a bus stop outside a Buffalo Wild Wings near the 19200 block of Soledad Canyon Road in Canyon Country.

The LA County Sheriff's Department is under scrutiny for how deputies handled a call involving a group of black teens. Phil Shuman is in Santa Clarita with what happened.

Tammi Collins, the mother of one of the teens, posted video of the incident on Instagram saying that her son and two of his friends were sitting at a bus stop when a homeless man asked if they had any crack and then tried to steal their stuff. She said that the man became aggressive, ripped his shirt off, and pulled a knife on the teens. Collins said that when the man attacked the teens with the knife, they attempted to fend him off using their skateboards.

According to Collins, several bystanders, including the manager of the Buffalo Wild Wings, called 911 in an attempt to get the boys some help. One caller, she said, told the dispatcher "two black guys were attacking a homeless man."

The video showed two deputies with their guns pointed at the teens as backup units arrived. The third responding deputy exits his vehicle, immediately grabs a rifle, and runs across the street pointing the rifle at the teens.

Numerous bystanders can be heard in the video saying things like, "This is crazy! It's the other guy!" and "There's no reason. They're just kids!" They can also be heard telling the boys, "Everything is going to be okay."

The officers continued to detain all three Black teens, despite being told by a bystander, "I talked to your sergeant on the phone and told your sergeant that there was a male, Hispanic, outside in the parking lot chasing three African-American kids with a knife."

A deputy told the bystanders "I'm pretty sure someone is with him too, so everyone gets detained." Another deputy jumped in saying, "So this seems like a different call, we're on another call for service. Someone was hit with a skateboard and these three gentlemen (referring to the teens) were described in the call."

In a statement to TMZ, the sheriff's department said the 911 call came in as an "assault with a deadly weapon." Specifically, two adult males hitting another man with a skateboard. The kids were detained and after deputies spoke with them and witnesses, they were released and no arrests were made. The department doesn't know what happened to the homeless man.

Los Angeles County Sheriff Alex Villanueva posted a video statement on Twitter Monday afternoon, stating that he had "concerns regarding the tactics that were deployed" and saying that the incident is now under investigation.

The sheriff tells FOX 11 he’s concerned by what he saw in the video particularly that one of the deputies pulled out an AR- 15 and aimed it at the unarmed teens. He feels that was excessive but he says those deputies were also confused by what they were responding to.

Sheriff Villanueva is now launching an internal investigation into how this was all handled.

"There’s a specific reason for those types of weapons, particularly the AR-15, and it doesn’t seem to fit the criteria we use to deploy them in the field," Villanueva said.

Robert Brown said, “I was horrified.”

Brown is the attorney representing two of the teens in the incident and he says they’re shaken.

"It was bad enough to have a situation where someone attacks them with a knife, then on top of that to have, when you think help has arrived, to have guns pointed at you, and have this be a life or death situation, yes they are definitely trying to process it," Brown said.

“The city of Santa Clarita is aware of the incident which took place this past Friday involving Santa Clarita sheriff’s deputies detaining two people at gunpoint, and we are very concerned,” said Mayor Cameron Smyth.

The teens were eventually released from custody.