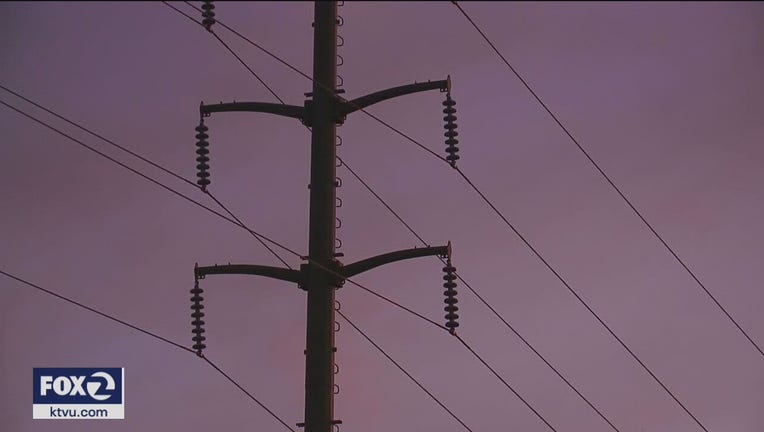 OAKLAND, Calif. - The organization that oversees California's power grid does not
expect large-scale power outages Wednesday, provided that residents across the state conserve energy during peak hours the way they did the previous three days.

Berberich credited the state's flex alerts from 3 p.m. to 10 p.m.
on Sunday, and in particular, Monday and Tuesday with keeping the lights on across the state.

"The conservation efforts are the reason, and probably the only
reason, we were able to get through those days without any kind of load disruptions," he said.

The state reduced its energy usage by about 3,000 megawatts
Tuesday during the flex alert period, he said, and needed similar
conservation figures to hedge against the potential loss of a large power plant that could lead to widespread power outages.

The CAISO forecasted the use of about 47,000 megawatts on
Wednesday. On a normal summer day, the state uses about 38,000 megawatts.

Wednesday's flex alert was pushed up one hour to 2 p.m. to 9 p.m., according to Berberich, because the state was scrambling for additional energy due to high use between 2 p.m. and 3 p.m.

"We do not expect any load disruptions," Berberich said. "We're
counting on those conservation measures to be able to say that."

"Tonight, we believe in the immediate, is the last night we really
need everybody to do everything in their power to flex their power use," he said.

Newsom credited the U.S. Navy, vehicle manufacturer Tesla and
petroleum companies like Chevron and Marathon for their efforts to provide additional energy generation to the state and reduce their normally high energy use in recent days.

The state has also tapped into its additional clean energy
resources via the Hetch Hetchy hydroelectric plant and the state's solar plants.

Newsom said the high temperatures and increased energy demands are indicative of the steps the state must take in the coming years to transition to 100 percent renewable energy and adapt to a changing climate.

PG&E said if power outages do occur, they will last about two
hours. The utility echoed the CAISO's and Newsom's calls to continue conserving energy throughout the day Wednesday to avoid such outages.

PG&E customers can check if they are in a coverage zone that may be affected by a power outage at pge.com/rotatingoutages.

Those who fall into "block 50," according to a PG&E spokesman,
share an electrical circuit with critical facilities like hospitals and are less likely to experience power outages.

However, they're not entirely averse to outages, the spokesman
said, and could be affected in the case of widespread outages.

PG&E offered several ways customers can reduce their power use, including raising their thermostats, covering windows, using a ceiling fan and avoiding the use of large household appliances.

Customers are also advised to stay hydrated and out of direct
sunlight during the heat wave to avoid heat-related conditions like heat stroke.