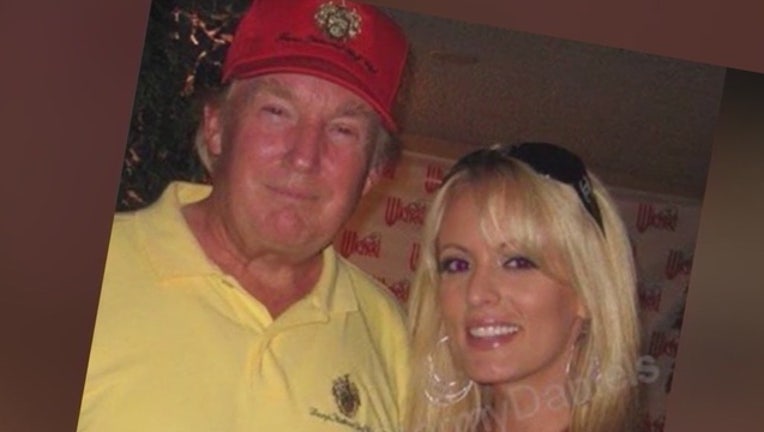 Stormy Daniels, whose real name is Stephanie Clifford, has been seeking to invalidate a nondisclosure agreement she signed days before the 2016 presidential election in order to discuss their relationship, which she said began in 2006 and continued for about a year.

Clifford's attorney, Michael Avenatti, told The Associated Press his client had been "physically threatened," but he didn't provide details. He would not comment on whether the threats came from anyone tied to the president, the Trump campaign or the Trump Organization.

Clifford will discuss the threats during a segment on CBS' "60 Minutes," which is scheduled to air later this month. Avenatti said he was confident that people would believe her after watching her interview.

"There's the act and there's the cover-up, and the American people are going to learn about both in the interview and beyond," the lawyer said during an interview with MSNBC's "Morning Joe" on Friday.

White House press secretary Sarah Huckabee Sanders told reporters Friday that she had no knowledge of the situation and hadn't spoken with the president about it.

But, she said, "obviously we take the safety and security of any person seriously" and "certainly would condemn anyone threatening any individual."

Clifford filed a lawsuit in Los Angeles last week that sought to invalidate the agreement so she could "set the record straight" and has offered to return the $130,000 she was paid for agreeing not to discuss the relationship. Clifford's lawsuit claimed the "hush agreement" she signed in October 2016 is legally invalid because it was only signed by Clifford and Trump's attorney, Michael Cohen, but was not signed by Trump.

The lawsuit refers to her beginning an "intimate relationship" with Trump in 2006 that continued "well into the year 2007." She said the relationship included encounters in Lake Tahoe, Nevada, and Beverly Hills, California. Trump married his current wife, Melania Trump, in 2005, and their son, Barron, was born in 2006.

Sanders said last week that Trump has "made very well clear that none of these allegations are true."

In addition to Clifford, six women have contacted Avenatti with similar stories, he said. Two of the women appear to have signed nondisclosure agreements, Avenatti said.

Clifford also has previously denied through a lawyer that she and Trump had an affair, but Avenatti has said that was to meet the terms of the nondisclosure agreement.

Cohen has denied there was ever an affair and said he paid the $130,000 out of his pocket. He has said neither the Trump Organization nor the Trump campaign was a party to the transaction with Clifford and he was not reimbursed for the payment.

Cohen did not immediately respond to an email seeking comment Friday.