"This is one of the most important public dollars that we can spend. Because what does it do? It builds infrastructure, which improves quality of life. More people taking public transportation, clean air for our children, less time in the car for their families," said Speaker Nancy Pelosi.

Pelosi said Biden's Build Back Better plan would be the biggest investment in passenger rail since the creation of Amtrak. She said China already has 22,000 miles of high speed rail, which will double by 2035, and Japan has had high speed rail for nearly 60 years. America is now investing in it. 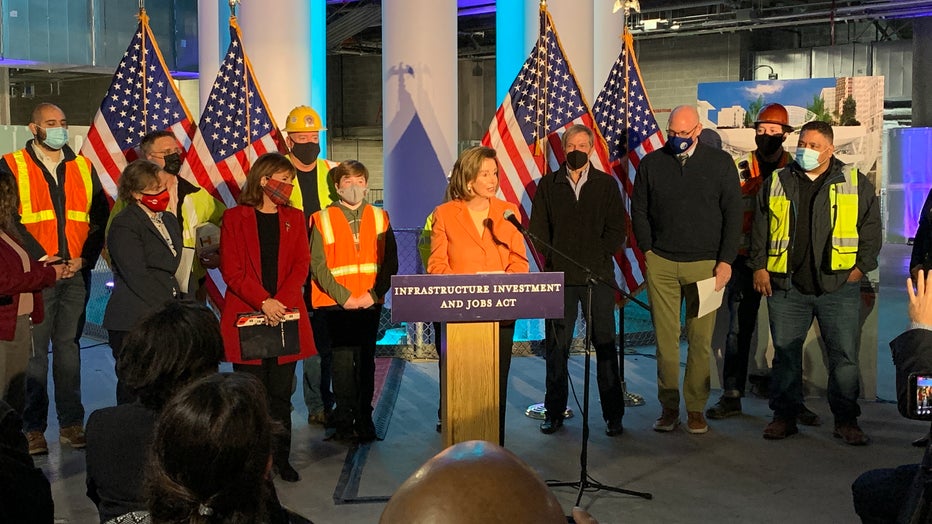 And she said the updates to transit will be historic for San Francisco.

"Yes, it is big & complex, and it is beautiful. It’s also 100 years late in getting here," said California Democratic Rep. Jackie Speier. "When you think about it, think about big cities around the country, New York, Chicago, Washington. They have these complexes already."

Speier said getting from San Francisco to San Jose will be faster and available to everyone.

An electrified Caltrain will be on a test track in 2022. A representative for Caltrain said federal funds helped get that project over the finish line.

And with the updates to transit, Speier said more than a million jobs will be created.

"This is an example of what green jobs can be," said Rudy Gonzalez, Secretary-Treasurer of the San Francisco Building and Construction Trades Council. "Knowing workers today are struggling in our city and in our region for economic recovery, they’re yearning, they’re excited to get to work. We can put them to work with projects like this. High speed rail isn’t just something people talk about in the press, it’s real and it’s here."