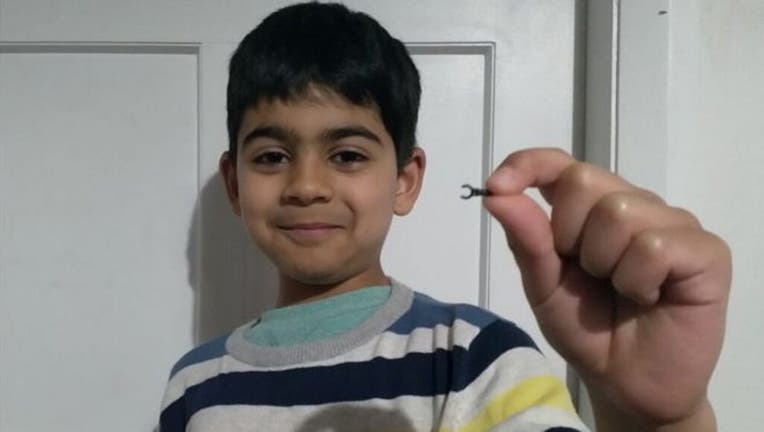 "We were shocked, his eyes were wide open and he was like, I found the Lego, I kept telling you that it was there, but you were saying that it was not," the boy's father said. (Mudassir Anwar)

Samir Anwar was playing with Legos in 2018 when he stuck a piece up his nose -- and it finally dislodged two years later.

A doctor told the New Zealand family that the Lego would soon work its way through the child’s system, the outlet wrote. But it never did.

"Since then, we were pretty confident that he didn't have anything in his nose," Anwar told BBC. The boy kept complaining days later, saying there was something in his nose, per the report.

Related: Woman claims she found Jesus' face on a potato: 'It was just looking at me'

Two years later, the family was under the impression the Lego piece cleared the boy’s system.

However, this week, Samir was eating a muffin when the dusting on top irritated his nose, per BBC.

"He started getting anxious again and we said to him just go and blow your nose. So he did,” his father told the outlet.

To the family's surprise, a black Lego hand dropped into the tissue.

"We were shocked, his eyes were wide open and he was like, I found the Lego, I kept telling you that it was there, but you were saying that it was not," he said.

"I was surprised and a bit scared," Samir told the outlet, saying he’s still a huge Lego fan and he was impressed that the piece had stayed together.

If an object gets stuck in your child's nose, it's important to act quickly, according to Dr. Purva Grover, Pediatric Emergency director at Cleveland Clinic. Grover tells parents to make one attempt at removing the object, and then consult a doctor right away. In rare cases, the object can dislodge and cause choking.