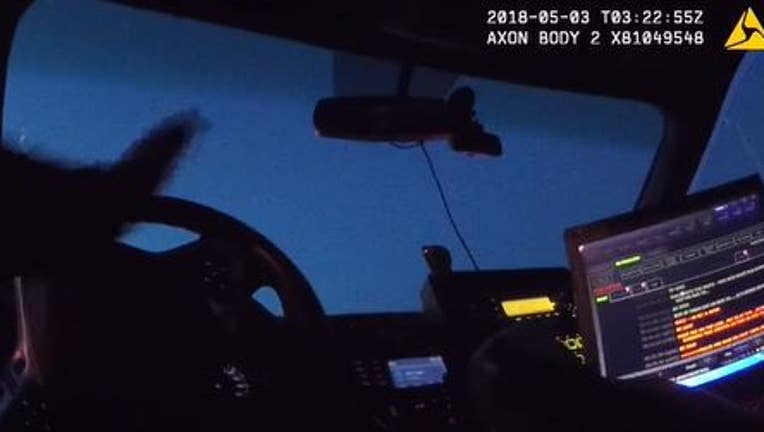 SAN JOSE, Calif. - A man who was run over by a police SUV during a 2018 pursuit was awarded $6 million in court this week. The city of San Jose and the police officer involved were named as defendants in the case.

According to the complaint, on March 2, 2018 the plaintiff Andy Martin had gotten into a verbal altercation with a security guard at Eastridge Mall. The security guard called police and said Martin and his cousin, who was with him, made threats with a knife and to shoot them, though neither had weapons.

The complaint continues, Martin and his cousin were walking on the Capitol Expressway footpath to In-and-Out Burger when SJPD Officer Alexandre Vieira Ribeiro approached them in his patrol SUV.

As a result, Martin suffered pelvis fractures, a broken ankle, nerve damage and other permanent injuries.

Body camera video from two officers shows parts of the incident and Martin screaming in pain as he is run over by the police vehicle.

"The defendant told a lot of lies on body-cam right after this happened, to try to escape accountability, most significantly including telling Mr. Martin: ‘No one ran over you, dude,’ and telling another officer that Mr. Martin had just suddenly stopped his flight, causing the officer to hit him," said Ben Nisenbaum of the Law Offices of John Burris, who is an attorney for Martin. "The video showed the officer turned into Mr. Martin, ran over him, then reversed as the officer was getting out of his car, which the defendant denied doing. The jury’s verdict will provide for Mr. Martin to live as close to a normal life as possible now."

Martin’s attorney John Burris said justice prevailed and that the jury’s award sends clear notice that they did not believe the officer followed protocol and used his vehicle in a reckless manner.

The lawsuit was filed in March of 2019. A federal jury in Oakland decided in favor of Martin on Thursday. KTVU has reached out to the city attorney on this verdict, but did not immediately heard back from them.