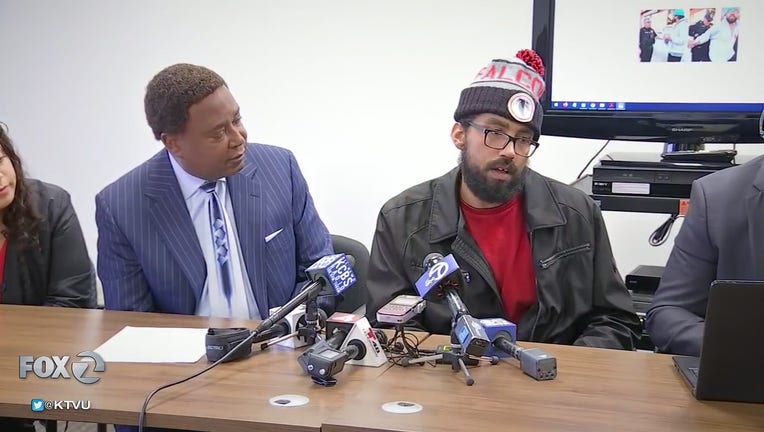 The man detained by BART police and cited for eating a sandwich is suing the transit agency.

CONCORD, Calif. - The Concord man, who was handcuffed and cited after a confrontation with a BART police officer for eating a sandwich while on a station platform, is now filing a claim against BART.

BART's General Manager Bob Powers has apologized for the encounter, but on Thursday, we learned at a news conference that the man detained, Steve Foster, filed a claim alleging the BART officer racially profiled him and violated his civil rights.

Sitting next to his lawyer, John Burris, Foster spoke about the incident at the Pleasant Hill BART station earlier this month.

"He told me I was an idiot. Called me stupid a few times," said Foster.

Foster was eating a sandwich on the platform at the BART station when he was detained and cited by BART police.

Signs outside the station and on the platform clearly state eating in the area is a violation of state law. However, his lawyer said it is one that is rarely enforced.

"It's relatively common place that people eat on BART. Signage is small, not enforced," Burris said at the news conference.

Foster said he knew he could not eat on the train. However, he did not know it was against the law to eat on the platform.

He said had he known, he would have thrown it away or eaten it outside the faregate.

However, he felt attacked and singled out by the officer because he's a black man and didn't want to back down.

"I felt I had to be just as disrespectful as I felt I was being disrespected and singled out. I felt like I had to get even," said Foster.

For now, the transit agency said it will not comment on a future lawsuit. However, earlier this week, BART's general manager said in a letter he was disappointed on how things unfolded and apologized to Foster.

However, he also said the officer was just doing his job.

BART has 45 days to respond to the claim.

An earlier version of this story incorrectly stated BART's police chief apologized for this incident.