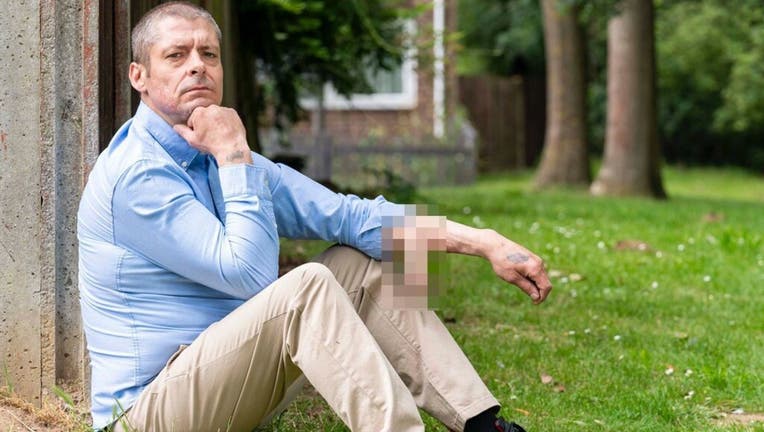 Malcolm MacDonald awaits a surgery to transfer the constructed penis from his arm to its rightful place. (Photo credit MEGA AGENCY)

A British man who lost his penis to a severe blood infection now has a new one built on his arm.

Malcolm MacDonald, whose surgeons were able to add an extra two inches to his manhood, is now awaiting final surgery to transfer it to its rightful place, reports say.

The 45-year-old had a perineum infection that worsened into sepsis, and soon he saw his fingers, toes and penis turn black, according to a report by The Sun. He was “completely gutted” when his penis fell off in 2014, though his testicles were still intact, the outlet wrote.

He reportedly nicknamed the appendage “Jimmy” and can now find the humor in the situation while he awaits the final procedure.

“Of course it is mad – having a penis on your arm,” MacDonald told the outlet. “Not even I am used to it. But when you think about it, it’s actually amazing."

Professor David Ralph at London’s University College Hospital has expertise in penile reconstruction and built MacDonald’s new penis out of a skin graft from his left arm, The Sun wrote. A tube and a hand pump are said to allow for a “mechanical erection.”

The man already has two children so he wasn't worried about sex, the outlet wrote.

“It was always more about my self-confidence and simple things like using the loo," MacDonald told The Sun.

When MacDonald was due for the operation to transfer the new penis to the groin area, he was reportedly unwell and it was pushed to a later date. The coronavirus pandemic further added to the delays.

The man hopes to have the final surgery by the end of the year, he said.