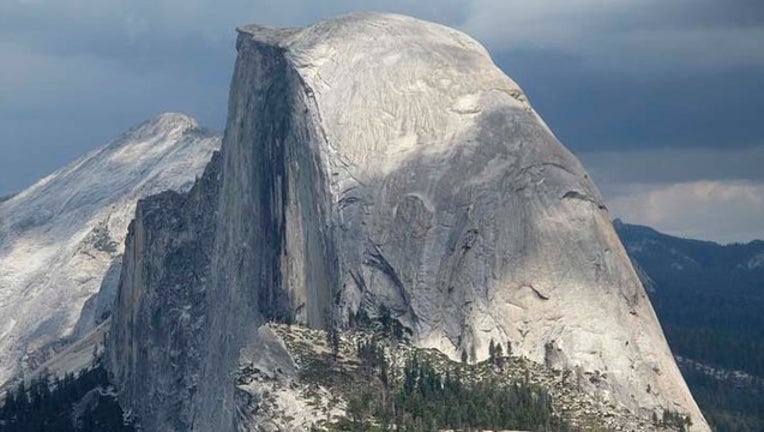 FRESNO, Calif. (AP) -- A massive sheet of rock has fallen from the vertical face of Half Dome in Yosemite National Park, making one of the most popular routes attempted by climbers in North America even more challenging, park officials said Tuesday.

The granite sheet that peeled off measured roughly 100 by 200 feet. It was discovered by climbers who were attempting the route and had to turn back.

"What used to be relatively easy climbing has gotten much more difficult," park geologist and climber Greg Stock said.

Half Dome -- an icon of the park that is visible throughout Yosemite Valley -- is scaled by hundreds of experienced climbers each year.

The rock fell from halfway up the sheer face of Half Dome, which rises more than 1,000 feet. A path for hikers using cable handrails was not changed.

There are several routes for climbers to scale Half Dome, but the one impacted when the rock fell ranks as one of the top 50 climbing destinations in North America, said Mike Gauthier, Yosemite's chief of staff and an avid climber.

Such falls occur often in Yosemite Valley and on other climbing destinations, forcing climbers to find new routes, he said.

"Now is their chance to find a new work-around," Gauthier said of Half Dome. "And they will."

Nobody was injured or witnessed the rock fall believed to have happened last week.

Renowned climber Kevin Jorgeson said the fallen section had been one of his favorite routes. He has twice scaled Half Dome.

In addition, he and climbing partner Tommy Caldwell made history early this year with a free climb up Dawn Wall on the opposite side of Yosemite Valley.

"It's on a lot of people's lists for a classic big wall route to climb," he said of Half Dome. "It would be uninformed to say that it is impossible."