Katy Bannerman, a mom of two and middle school teacher, donated more than 8,000 ounces of breast milk over the course of the coronavirus pandemic to help other moms facing breastfeeding issues.

WILMINGTON, N.C. - A North Carolina mother donated more than 8,000 ounces of breast milk over the course of the coronavirus pandemic to help other moms who may be struggling with their supply or facing other breastfeeding issues.

Katy Bannerman, a mother of two and a middle school teacher outside of Wilmington, had an oversupply of breast milk after her second child was born in 2019.

But with her first child, Silas, she had experienced lactation issues. As a newborn, Silas ended up in the pediatric intensive care unit with jaundice. During his infancy, Bannerman wasn’t able to nurse for as long as she had hoped. And like many new moms trying to navigate this new role, she beat herself up for it.

"I was distressed, and stress is one of the things that is not great for breast milk supply," Bannerman said. "It was a tough start."

The U.S. Centers for Disease Control and Prevention estimates that 60% of mothers stop breastfeeding earlier than they want to, due to several factors including lactation issues or a lack of support from family and their workplace.

The American Academy of Pediatrics also recommends infants are exclusively breastfed for about the first six months, but only about 25% of infants are, according to the CDC. 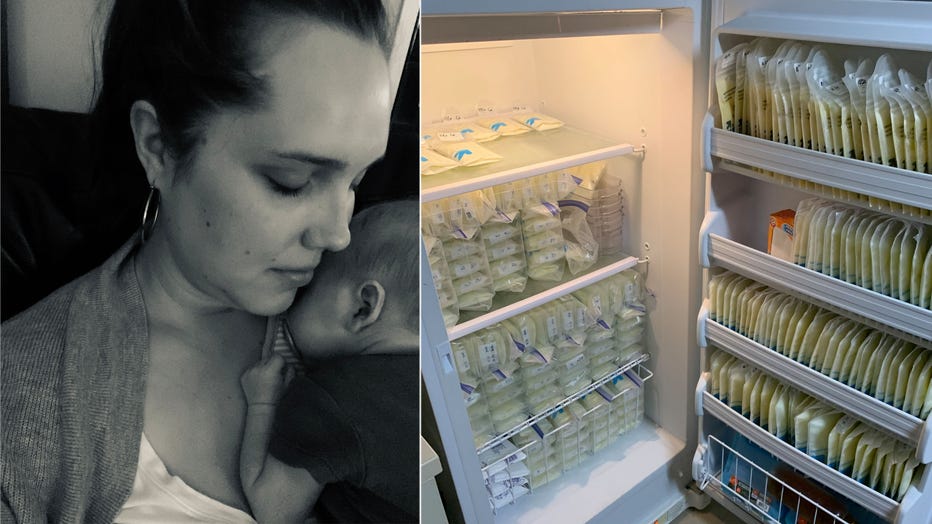 Katy Bannerman, a mother of two in Leland, North Carolina, donated more than 8,000 ounces of breastmilk to other moms in need of precious milk for their babies. (Photo credit: Provided / Katy Bannerman)

When Bannerman became pregnant again, she proactively sought the help of a lactation consultant. This person recommended a different pump to use, and offered other helpful advice — such as the need to stay hydrated and keeping up a more regular schedule of pumping or nursing throughout the day.

"She was totally crucial to my success," Bannerman recalled. "I just wasn’t aware of all the things that you need to do the first time around."

Her second son, Avery, was born in October 2019. A few months in, she found herself pumping upwards of 70 to 80 ounces a day — well above what Avery was consuming. During the coronavirus pandemic, she also had more opportunities to pump because she was home.

At one point, Bannerman was producing so much milk that she even tried to cut down her supply, seeking advice from other moms online. An oversupply, which simply means the mother is producing more milk than the baby requires, can be both a blessing and a curse. It can sometimes lead to blocked milk ducts and even a painful infection called mastitis, from which she suffered.

The family began storing the extra breast milk in a deep freezer. At first, Bannerman set a goal of freezing 900 ounces by a certain date and then she would stop pumping altogether.

The stored frozen milk started accumulating. Once she realized her supply wouldn’t be an issue this time around, Bannerman began exploring ways to donate the extra breast milk so it wouldn’t expire and go unused.

She eventually found a local Facebook group in her area of Leland, located just outside of Wilmington, called Port City Milk Fairy. In the mom-to-mom milk sharing support group, women put out calls for milk and communicate information such as their diet and medication history.

"I put up a post that I had several thousands of ounces to donate, and it was not hard to get it allocated," she said.

What the CDC says about COVID-19 and pregnancy

There is still limited data about the safety of COVID-19 vaccines for women who are pregnant.

Over the course of a year, Bannerman ended up donating more than 8,000 ounces — or roughly 62.5 gallons — of breast milk to other families. Bannerman’s last donation was in December 2020.

There are many nonprofit human milk banks across the country, where processed breast milk comes from screened donors. The CDC says member banks of the Human Milk Banking Association of North America have a long safety record, which both accept donations at deposit sites or can arrange for free overnight shipping.

Bannerman credits her success to support from her mother, constantly helping around the house and cheering her on as she pumped over the days and months, as well as her husband — who each night would stow the milk away in individual storage bags, meticulously measuring and labeling each one. She encourages other moms to seek out help available to them, be it a lactation consultant, online support groups, or simply loved ones around them.

"Having the support system from my family and friends was the total contributing factor to my success," Bannerman said.

RELATED: Child care crisis during pandemic pushes US mothers out of the labor force