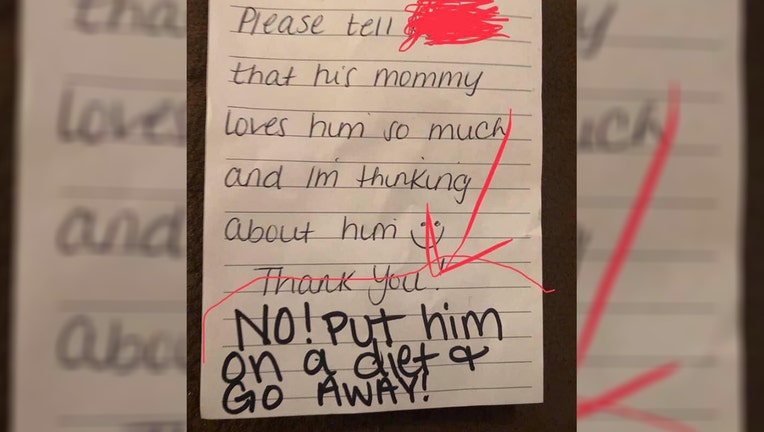 A Texas mother said she was horrified after a note left by a day care employee told her to put her son on a diet and "go away." (Francesca Easdon)

A Texas mother said she was horrified after a note left by a day care employee told her to put her son on a diet and "go away."

Francesca Easdon went on her Facebook page on Thursday to share the note she found in the lunchbox of Kyler, her son.

Easdon said she originally sent a note along with Kyler’s school lunch for the day that read: “Please tell Kyler that his mommy loves him so much and I’m thinking about him.”

She was shocked when she later found the note returned with an added note at the bottom that read: “No! Put him on a diet and go away!”

“I sent this note in Kylers lunchbox, thinking that it would make him smile at lunch time, but instead, I received this in return from one of the teachers!” Easdon posted.

The livid mother said she immediately contacted the school, Rocking Horse Day Care, and met with the director.

“I was assured that it was being investigated and handled, yet almost no remorse was shown,” she said. “I am disgusted that I put my trust in these people to care for my child and this is what I get in return.”

Easdon said she originally left the note to her son because she thought it would “make him smile at lunchtime.”

The mom said she had been working to introduce new healthy options in his lunchbox and had discussed the changes with his school. She clarified, however, that she thinks her son is “absolutely perfect the way he is.”

The teacher who wrote the note confessed, Easdon said, and was subsequently fired. Still, the mother said she removed her son from the school and enrolled him in a “beautiful new facility.”

“Kyler’s safety and level of care comes first,” she wrote. “Monitor your daycares closely and stay away from this facility, they do NOT deserve the privilege of teaching our children.”

KFC gravy sold with vulgar insult printed on it: 'S---face'