OAKLAND, Calif. - A woman picking up her child from school was killed Friday afternoon in a hit-and-run crash, police said.

Oakland Police Department say they received a call at 3:22 p.m. about a juvenile who was struck by a vehicle at the 1800 block of 98th Ave. across the street from Elmhurst United Middle School. 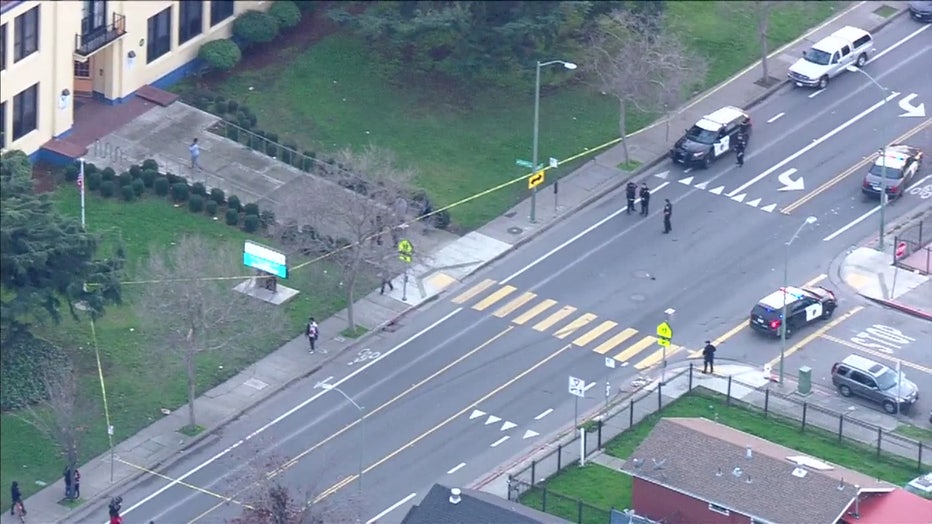 Police are searching for a suspect vehicle in a hit and run in Oakland.

Police later said the victim was an adult female and a member of the school community. The victim died at the scene.

As afternoon faded into the evening, the scene turned somber.

Classes were dismissed at 3:15 p.m. The mother, who was crossing the street in front of the school to pick up her child, was struck and killed by the driver.

We spoke to a witness at the scene who did not want to be identified.

"Horror, absolute horror. I had my daughter in the car. I immediately covered her eyes."

Police are searching for the vehicle, which they say fled. The car is described as a newer model Nissan Maxima with damage to the passenger side.

The witness said she saw a white four-door sedan speed by, going about 45 miles an hour in the center turn lane to bypass other cars that were waiting at the signal light.

"I saw what I thought were car parts flying in the air," she said. "I saw shoes and across the street, I saw this woman hit."

A spokesman for the Oakland Unified School District said the victim's child was not with her and did not witness the crash.

"There are some family members here on scene who are not doing well, understandably so. They're devastated by what happened," said school spokesman John Sasaki.

Neighbors describe 98th Ave. as a dangerous corridor where many drivers disregard the school zone's 25 mile per hour speed limit.

"It looks like the drivers don't respect...especially when the kids are crossing," said neighbor Araceli Solis.

Police are interviewing witnesses and looking for videos to help them identify the hit and run driver and the car.

"It's crazy how things can happen like that, not even to have the integrity to stop and say I did this and just leave," said Brisa Quintero, a neighborhood resident.

The witness said she wants the driver responsible caught and brought to justice in hopes of bringing some comfort to the victim's family.

"I have the look of her face implanted in my brain. I don't know how I'm going to get over that."

It appears many parents and children saw what happened because school had just let out for the day when the crash happened.