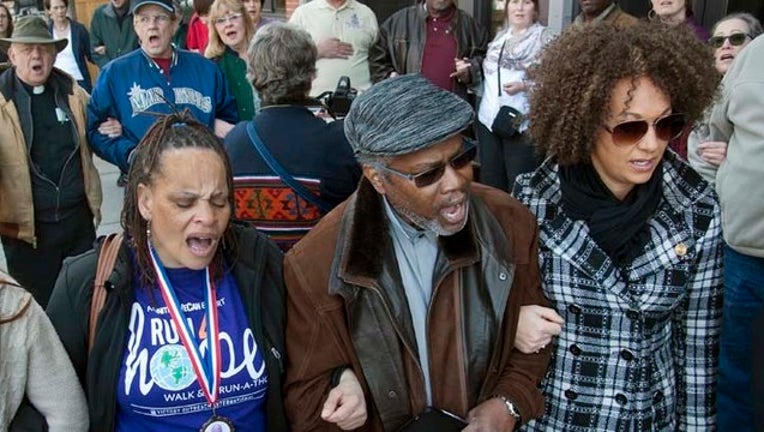 SPOKANE, Wash. (AP) — NAACP officials responded Friday to questions about the racial identity of the woman who runs a local Washington state chapter by saying the organization's leaders can come from any background.

Rachel Dolezal has led the Spokane, Washington, chapter of the African-American civil rights group for several years, but her integrity was thrown into question when her parents said she is white but has been pretending to be black.

Their public comments triggered a national debate over race and ethnicity.

Dolezal, meanwhile, has declined to comment directly about her family background, saying Thursday that the "question is not as easy as it seems. There's a lot of complexities . and I don't know that everyone would understand that."

She couldn't be reached Friday when contacted by The Associated Press.

Aside from her role as president of the Spokane NAACP chapter, Dolezal is an adjunct professor in the Africana Studies Program at Eastern Washington University and chairwoman of Spokane's police overnight board.

Spokane's mayor and City Council president have said an inquiry is underway into whether she violated city polices when she listed herself as white, black and American Indian on her application for the Office of Police Ombudsman Commission.

The NAACP has released a statement saying it respects Dolezal's privacy in the matter.

"One's racial identity is not a qualifying criteria or disqualifying standard for NAACP leadership,'" the group said. "In every corner of this country, the NAACP remains committed to securing political, educational, and economic justice for all people."

Dolezal has said the controversy emerged because of legal issues between family members, but she hasn't offered specifics.

Her mother says the family has been aware of the racial claims but has only commented about them when contacted.

Ruthanne Dolezal told The Spokesman-Review newspaper (http://bit.ly/1MuATMc ) her daughter's background is Czech, Swedish and German, with some Native American.

She said she and her daughter haven't been in touch for years but that Rachel Dolezal began to portray herself as black about a decade ago after the family adopted four black children.

"It's very sad that Rachel has not just been herself," the mother told the newspaper by phone from her home in Montana. "Her effectiveness in the causes of the African-American community would have been so much more viable and she would have been more effective if she had just been honest with everybody."