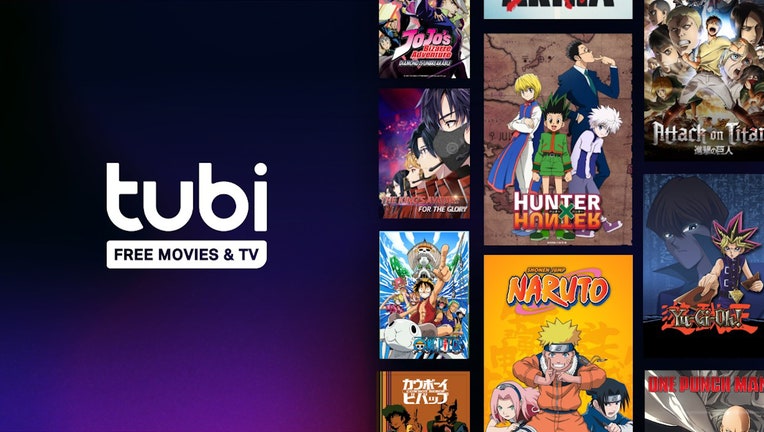 Instead of running away from that terrifying Titan in your dreams (or nightmares), run to the couch and celebrate National Anime Day binge-watching some popular anime shows and movies for free.

April 15 marks National Anime Day and Tubi has an extensive collection of anime titles from nostalgic classics like "Cowboy Bebop" and "Akira" to more recent hits including "Hunter X," "Naruto," and "One Punch Man."

Anime is a universally loved genre that has brought droves of people together to bond over their favorite shows and characters at conventions from Florida to California. And with or without the cosplay, you too can celebrate National Anime Day by streaming hundreds of popular anime movies and shows.

RELATED: Batter up for baseball season with these free-to-stream films celebrating the love of the game

Here are a few of the anime titles available on Tubi:

"He's a legend with an ice cold soul and a jones for revenge: Afro Samurai. As a kid, he saw his father slaughtered. Now a man, Afro journeys to the mountain to face destiny. The perpetrators are gonna get what they deserve."

"A mysterious child with psychic abilities escapes his prison and inadvertently draws a violent motorcycle gang into a heinous web of experimentation."

"From the director of Death Note comes Attack on Titan. Many years ago, humanity was forced to retreat behind the towering walls of a fortified city to escape the massive, man-eating Titans that roamed the land outside their fortress."

"The world is ripe for adventure when you're a cat who lives inside a banana, with plenty of kitty friends to share in your discoveries!"

"Ichigo could always see ghosts, but when a Soul Reaper transfers her powers to him he find his calling: to protect the living and the dead from evil."

"Explore the galaxy in this undeniably hip series that inspired a generation—and redefined anime as an indisputable art form. The Bebop crew is just trying to make a buck, and they’re the most entertaining gang of bounty hunters in the year 2071."

"Light Yagami is just another bored student until he finds the Death Note, a mysterious notebook that grants the power to kill anyone he names."

"Four young wizards from the most destructive guild in Fiore team up to take jobs, forging a bond more powerful than any magic and keeps growing."

"In a distant future, Tetsuro a human boy who wants his body replaced with a robotic one. This is possible, but to do so he has to reach the Immortal Planet onboard the space train Galaxy Express 999."

"The sole survivor of the Ghost Tribe joins his brave friends as they fight for a peaceful existence in a world where humans oppose spirits."

"A young boy, who dreams of being a hunter like his father, must pass the notoriously difficult and dangerous Hunter Qualification Exam."

"Based on the Shonen Jump manga series, this multigenerational tale follows the heroic Joestar family and their never-ending battle against evil."

"After being selected to compete in an elite electronic sports championship, a squad of young gamers prepares for the epic showdown."

"A brainy bookworm, who seems destined to be bullied, sees his fortune change, when he meets a butt-kicking cutie and her martial artist roommates."

"In feudal Japan, evil spirits known as mononoke plague the countryside, leaving a trail of fear in their wake. One mysterious person has the power to slay the mononoke where they stand; he is known as the Medicine Seller, and he vanquishes the spirits using the power of his Exorcism Sword. In order to draw his sword he must understand the Form, Truth and Reason of the mononoke. Armed with a sharp wit, the Medicine Seller wanders from place to place, striking down the evil spirits in his wake."

"12 years ago, the Nine-Tailed Fox claimed many lives before its spirit was contained with a baby boy who has now grown to become a ninja-in-training."

"Gourmet food hunter Toriko follows his dream of foraging the earth and animal kingdom for the rarest and most precious meal ingredients."

"On his quest to become king of the pirates, captain Monkey D. Luffy staffs his ship with a motley crew of sea raiders to claim a legendary treasure."

One Punch Man (2019): Starring Makoto Furukawa and Kaito Ishikawa."A hero becomes so strong from training that he can take out his worst foes with one punch, but strength has lost him his hair and fighting passion."

"Follows the adventures of teenager Yugi, whose magical secret comes to life when he plays his favorite card game: 'Duel Monsters."

"Follow a new generation of duelists at the prestigious Duel Academy—a highly competitive boarding school where pencils and books have been replaced by Duel Disks and monster cards!"