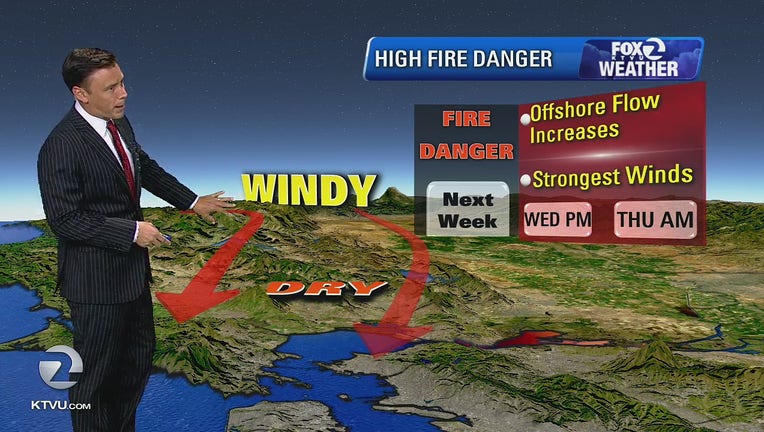 OAKLAND, Calif. - The National Weather Service is warning of another weather pattern that will lead to an increased risk of wildfires in the Bay Area next week.

There are light-to-moderate northeast winds with poor humidity forecasted on Monday and Tuesday followed by moderate-to-strong winds on Wednesday and Thursday.

In the North Bay mountains and East Bay hills, wind strength is expected to increase through Thursday with gusts of up to 55 mph starting Wednesday night.

Similar weather patterns prompted PG&E to proactively shut off power for hundreds of thousands of customers starting on Oct. 9.

So far, the utility has not warned of any upcoming power shutoffs associated with the upcoming weather pattern.

PG&E's handling of the proactive shutoffs were widely criticized.

At a meeting of the California Public Utilities Commission on Friday, CPUC President Marybel Batjer called the execution "inadequate" and said it "can not be repeated."

"The utility's plans for these events are only effective when they are implemented in a reasonable and competent manner. This did not happen last week," Batjer said.

"The loss of power endangers lives, especially those individuals who are reliant on power for medical reasons," she said.

In particular, she said that PG&E was not prepared to provide information about the event. Its call centers were overloaded and its website to tell customers whether they would lose power frequently crashed.

Even some local governments reported a "total breakdown" in communications with PG&E, she said.

Bill Johnson, PG&E's president and CEO, said that while it was impossible to prove that the shutoffs prevented them, he pointed to the lack of catastrophic wildfires during the high wind event as evidence that the shutoff was effective.

Climate change has led to more of PG&E's service areas being at risk for wildfires. Johnson said that since 2012, the utility's territory considered to have elevated wildfire risk has gone from 15 percent to more than 50 percent.

There have been devastating wildfires in California the last two autumn seasons. The Camp Fire last year - which killed 86 people and destroyed 18,806 structures - was easily the deadliest and most destructive wildfire in the state's history.

The fire was linked to PG&E lines. The utility has been criticized for its attention to safety and maintenance, but Johnson argued that its system in most of the wildfire-affected areas was "in pretty good shape" after an "unprecedented" inspection and repair process.

While he said that the communication issues were "not acceptable and cannot happen again," he warned that it could be a decade for PG&E to improve its infrastructure to the point that safety shutoffs won't be a regular feature of California life.

Each year he said that PG&E will be able to reduce the number of necessary shutoffs, both by improving the infrastructure and safety features and by exercising more precision in who the utility shuts down.

But the technological improvements necessary will take up to 10 years to implement, he said.