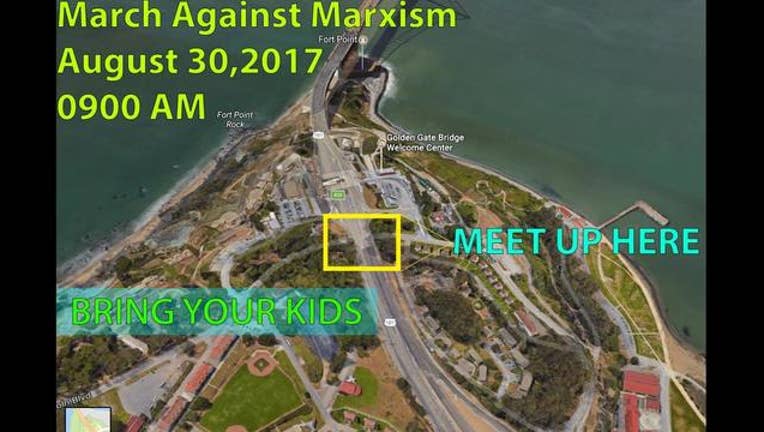 SAN FRANCISCO (BCN) - A newly-created Facebook group called Conservative Rustles is calling on fellow conservatives to bring their children to a rally in San Francisco where they are allegedly planning a march to the Golden Gate Bridge and block traffic Wednesday morning.

However, KTVU has not been able to confirm this information as a legitimate organization or event.

Conservative Rustles' posts only go back as far as August 27 and the Facebook page only has three likes as of this writing.

Headed by apparent San Francisco resident John Walters Monroe, has invited Identity Evropa and the "alt-right" to gather at Lincoln Boulevard and U.S. Highway 101 around 9 a.m., then march to the Golden Gate Bridge.

"The City of San Francisco government has made it clear that they support Antifa," Conservative Rustles wrote in the event posting on Facebook, referring to "anti-fascist" groups that have counter-protested at many
right-wing rallies.

Organizers also invited any parents in attendance to bring their children, because "Antifa wouldn't dare hurt the future generation of America, or would they...?"

According to the Conservative Rustles Facebook page, the group is "all about denying communist ideology in any way shape or form."

Monroe did not immediately respond today to an email requesting additional details about the event, himself or his group's anti-communist ideology, but his invitation to Identity Evropa may signal an association with fringe elements on the far right.

Identity Evropa identifies itself as a "pro-White organization" rather than as a racist or anti-Semitic hate group.

Identity Evropa did not immediately respond to a comment today about whether members of the group plan to attend Wednesday's event.

The event was first announced late Sunday morning, but as of midday today zero Facebook users had indicated they were interested in the march or planned to attend.

Priya Clemens, spokeswoman for the Golden Gate Bridge, Highway and Transportation District, said that any gathering with 50 people or more needs a special events permit and so far nobody has applied for one for Wednesday, and even permitted gatherings are only allowed on the pedestrian walkway.

"We will be monitoring the situation," Clemens said. "It's obviously illegal to walk, bike or stop traffic on the Golden Gate Bridge."

The district has security personnel, but ultimately the California Highway Patrol would be responsible for any arrests or other law enforcement activity that might take place on the bridge, according to Clemens.

"While everyone has a Constitutional right to protest and assemble -- and we treat everyone equally, regardless of the message -- violence, such as throwing objects, hurting others or damaging property, is not protected speech under the U.S. Constitution," CHP spokesman Officer Andrew Barclay said in a statement this afternoon.

"Additionally, accessing state highways or roads to protest is not only unlawful, but also extremely dangerous because it puts protestors, motorists, and first responders at great risk of injury or death," Barclay said.

The planned event for Wednesday follows actions in San Francisco and Berkeley on Saturday and Sunday by right-wing groups that prompted large counter-protests.