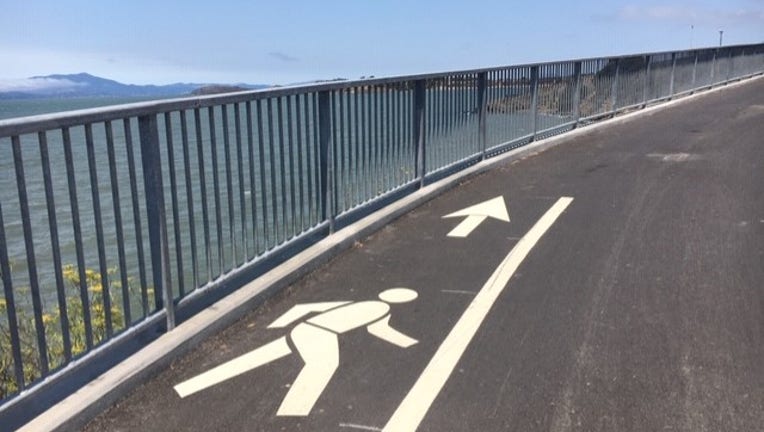 ALBANY, Calif. - Cyclists whizzed past at breakneck speed and the waters of the bay sparkled as a new stretch of the Bay Trail enabling folks to walk from Oakland to Richmond formally opened in Albany on Saturday.

The $18.9 million East Bay Regional Park District project added a new mile-long segment to the trail behind the Golden Gate Fields racetrack, closing a gap in the trail between Berkeley and Albany.

"This is a legacy of 20 years of partnerships with the community, community leaders and the park district," said Park District Board Member Elizabeth Echols during a brief opening ceremony on the trail.

"The views are stunning," Echols noted, framed by a backdrop of the bay. Walkers, cyclists, stroller-pushers and all manner of outdoor enthusiasts can see the Bay Bridge, the Golden Gate Bridge and the San Francisco skyline from the new stretch of trail right on the bay.

In his remarks, Park District General Manager Robert Doyle stressed, "To keep the park open, wear a mask and observe six feet of distance," in concurrence with Centers for Disease Control and Protection guidance.

In line with state guidance prohibiting public gatherings to limit the spread of COVID-19, the opening ceremony was live streamed for the public. Only a few officials and members of the press attended.

The project also redid a small beach at the north end of the new segment in Albany, doubling its size, hauling away rocks and concrete, adding picnic tables and restrooms and creating a wetland area with plants to protect wildlife.

Shoshana Rosenberg said she was "just overjoyed" at the new segment as she relaxed on a bench overlooking the bay with friend Madeline Chun of Berkeley.

"I used to bike out here" behind the racetrack, Rosenberg, a Richmond resident, said. "It was awful because there was shattered glass. Now, it's pristine."

Rosenberg said she liked the demarcations on the path separating cyclists and pedestrians. "There is tension sometimes between walkers and cyclists, and this will help."

The two friends started at the Albany Bulb near Buchanan Street and walked seven miles on the trail to the Berkeley Marina - a trip that wasn't possible before the new segment was added.

The beach and new stretch of trail actually opened several months ago and have been popular ever since. Located at the north end near the Albany Bulb, the beach area has scant parking. More parking is available at the south end of the new segment.