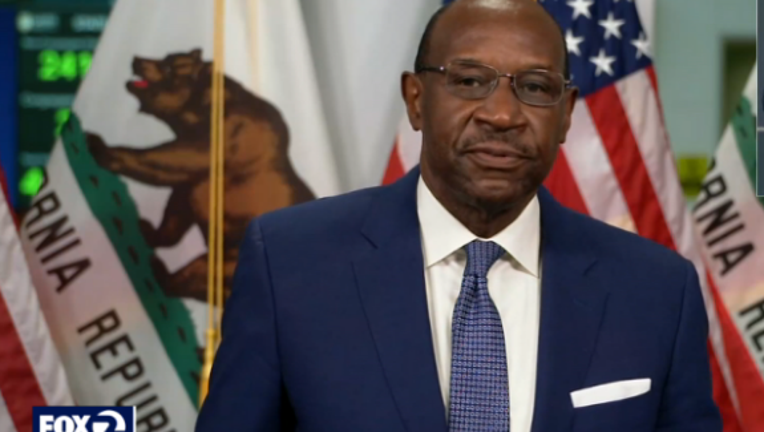 SACRAMENTO, Calif. - Governor Gavin Newsom on Monday nominated a new associate justice to the state Supreme Court, who would be the third African American and the first openly gay justice to hold this seat if he is confirmed.

As Newsom introduced Martin Jenkins of Oakland, the governor also called out the justice's unusual background: Jenkins was the son of a Coit tower janitor and played for the National Football League. His time with the NFL was brief.  He signed a contract with the Seattle Seahawks for a short time after finishing Santa Clara University. But he soon realized that he'd rather be a lawyer and a judge than a sports professional.

“Justice Jenkins is widely respected among lawyers and jurists, active in his Oakland community and his faith, and is a decent man to his core,” Newsom said. “As a critical member of my senior leadership team, I’ve seen firsthand that Justice Jenkins possesses brilliance and humility in equal measure. The people of California could not ask for a better jurist or kinder person to take on this important responsibility.”

It has been 29 years since a Black man has sat on the state Supreme Court, Jenkins noted, saying he would not "be here today" without the previous two, Wiley Manuel and Allen Broussard.

Jenkins, a Democrat, would fill a vacancy created by California Supreme Court Justice Ming W. Chin — the first Chinese American justice on the court and who was its most conservative member.

Jenkins, 66, thanked "all of those who blazed the trail."

Jenkins also thanked his parents, a janitor at Coit tower for 25 years and a stay-at-home mother, who taught him the value of public service. He also thanked his life partner, whom he called out and said he loved to this day.

His sexual orientation, Jenkins said, is perhaps the "greatest challenge of my life, and it hasn't been easy."

“I want these young people to know that living a life of authenticity is the greatest gift you can give yourself. And if you do that, you will find yourself in a position where people see you,” Jenkins said. “Thank you, Governor Newsom, for seeing me.”

Jenkins added that he was "truly humbled and honored to be asked by the governor to continue serving the people of California on the Supreme Court. If confirmed, I will serve with the highest ethical standards that have guided me throughout my career, informed by the law and what I understand to be fair and just.”

Jenkins was born and raised in the Bay Area and as a young boy, cleaned office buildings and churches with his late father. He earned a Juris Doctor degree from the University of San Francisco School of Law.

He became a civil rights attorney working under President Ronald Reagan and served as an Associate Justice on the California Court of Appeal, First Appellate District from 2008 to 2019. He was appointed by President Bill Clinton to the U.S. District Court for the Northern District of California in 1997 and served on the bench until 2008.

In addition to his recent judicial service, Jenkins served as a judge on the Alameda County Superior Court from 1992 to 1997 and on the Oakland Municipal Court from 1989 to 1992. From 1986 to 1989, he was a trial attorney with the Pacific Bell Legal Department of San Francisco and from 1983 to 1986, he worked in the U.S. Department of Justice as a trial attorney litigating civil rights cases. From 1980 to 1983, he worked as a prosecutor for the Alameda County District Attorney’s Office.

Most recently, he has been Newsom’s judicial appointments secretary.

During his career, Newsom's office pointed out that Jenkins pursued cases involving police misconduct and cross burnings. He has also worked to promote gender equality through cases on pregnancy-related leave and sex discrimination.

Thelton Henderson, retired senior U.S. District Judge of the U.S. District Court of the Northern District of California, said in a statement that he first met Jenkins more than 30 years ago when he dropped in his office after hearing that he too, played football.

"I didn’t usually take drop-ins but he seemed special and so sincere," Henderson said. "We talked for hours that day about the law and how to stay connected to the communities we grew up in. I can say without a doubt that I have never seen a harder working and more dedicated judicial officer in my entire career. Nobody stayed in the office later than Marty. He was intensely aware that real people’s lives were affected by his rulings and wanted to make sure he got it right."

Newsom said he hoped that process could take place within the next month.