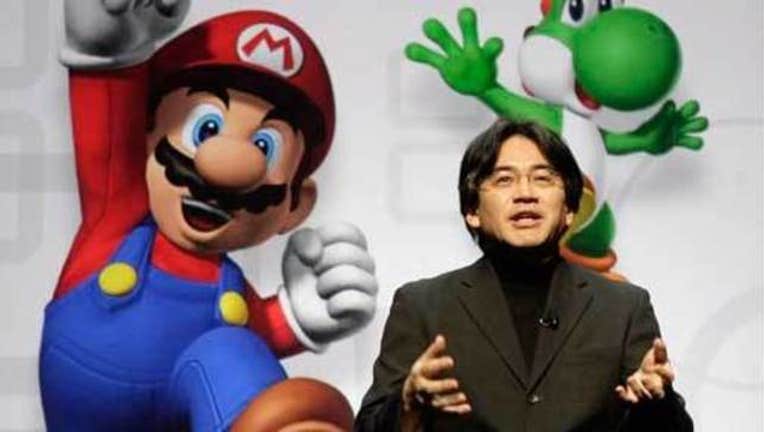 TOKYO (AP) — Satoru Iwata, who led Japanese video game company Nintendo Co. through years of growth with its Pokemon and Super Mario franchises, died on Saturday after a lengthy illness, drawing a flood of emotional tributes from game fans and industry rivals. He was 55.

The company's statement on Monday said Iwata died of a bile duct tumor.

There was a torrent of sorrow online for Iwata as a person dedicated to entertaining others. On Twitter, fans thanked him for childhood memories and for bringing families together. On some Internet sites, an image of the flag in the Super Mario game was flying at half-staff. Nintendo America announced it was suspending social media activity for the day "in remembrance" of Iwata.

"He didn't just create technology. He created a whole culture," said Nobuyuki Hayashi, a consultant and technology expert. "It wasn't just a consumer product that he had delivered. He brought to people something that's eternal, what people remember from when they were kids. He was special."

Iwata, president from 2002, died Saturday at Kyoto University Hospital. He had not been seen recently at game events, such as E3 in Los Angeles, where he was usually a participant.

Iwata led Nintendo's development into a global company, with its hit Wii home console and DS handheld, and also through its recent troubles caused by the popularity of smartphones.

His replacement was not immediately announced, but the company said star game designer Shigeru Miyamaoto will remain in the leadership team along with Genyo Takeda, who is also in the game development field.

Iwata had been poised to lead Nintendo through another stage after it recently did an about-face and said it will start making games for smartphones, meaning that Super Mario the plumber would soon start arriving on cellphones and tablets.

The falloff in appetite for game machines in the past few years was partly because people are increasingly playing games or doing social media and other activities on smartphones. Nintendo has repeatedly had to lower prices on gadgets to woo buyers. The company returned to profit in the fiscal year ended March 2015 after several years of losses.

Until the recent shift in strategy, company officials including Iwata had repeatedly rejected the idea of developing games for mobile devices, a market that they brushed off for years as irrelevant.

Nintendo pioneered game machines since the 1980s, developing one of the first machines and the hit Game Boy hand-held machine.

Its main rivals in the business are Sony Corp. with the PlayStation machines and Microsoft Corp. with the Xbox One machine. Both companies have done better in adapting to the era of online and mobile games.

"I am at a loss for words," said Ken Kutaragi, the former head of Sony Computer Entertainment. "I pay my respects to the extraordinary leadership of President Iwata, who truly loved games and powerfully showed the way for our industry."

Iwata succeeded Hiroshi Yamauchi, who ruled over the Kyoto-based company for half a century, transforming it from a traditional playing-card company to a technological powerhouse. Yamauchi died in 2013 at 85.

Iwata was picked, with Yamauchi's blessing, and Yamauchi remained adviser for many years. Iwata had been employed at an innovative software company before he was recruited as Nintendo chief. He was tapped as president at a surprisingly young age, in his early 40s, for a Japanese company.

Iwata was a respected and popular figure in the game industry, partly because he was relatively more approachable than executives at other Japanese companies, who tend to be aloof and rigid in demeanor.

As news of Iwata's death spread online, condolences and virtual tributes emerged on social media and on Miiverse, Nintendo's online community where users can post notes and drawings created with a Nintendo 3DS or Wii U stylus. Fans were circulating avatars called Mii in the likeness of Iwata, which already existed but were suddenly taking on special meaning.

"Halo" and "Destiny" developer Bungie posted a quote from Iwata's 2005 talk at the Game Developers Conference on Twitter: "On my business card, I am a corporate president. In my mind, I am a game developer. But in my heart, I am a gamer."

On Twitter, personal homages were using the hashtags "ThankYouIwata" and "RIPSatoruIwata."

Iwata remained a presence in Nintendo promotional materials up until his death. While he had been absent from the Electronic Entertainment Expo for the past two years due to his health, Iwata appeared in both human and puppet form in a humorous video presentation streamed June 16 during the gaming expo.

Mark MacDonald, executive director at Tokyo-based 8-4, which consults about games, said Iwata was not afraid to be different and go against mainstream trends in games.

But he was also at one with game players, interacting with them, often using the Internet, in "this playful back and forth, like a David Letterman in your living room," MacDonald said in a telephone interview.

Miyamoto, the Nintendo game designer, said he was shocked and saddened.

"We will upkeep the development approach that we built with Iwata, and we in the development team hope to keep working as one to build toward the future," he said in a statement.

A funeral service will be held on July 17. Iwata is survived by his wife Kayoko. The company declined to disclose other details of his family.