The aurora borealis lit up a starry night sky over Alberta, Canada, in the early hours of Oct. 31, 2021. Credit: Laszlo Szojka via Storyful

ALBERTA, Canada - A huge solar flare from the sun sparked a beautiful, eerie glow over parts of the world on Halloween, treating some onlookers to a supercharged northern lights show.

The mesmerizing shades of green and violet were captured in the early hours of Oct. 31 for many in northern Canada.

The northern lights, or the aurora borealis, were seen over Alberta. Laszlo Szojka recorded timelapse footage showing ribbons of green and purple extending across the sky as shooting stars soared in the distance. 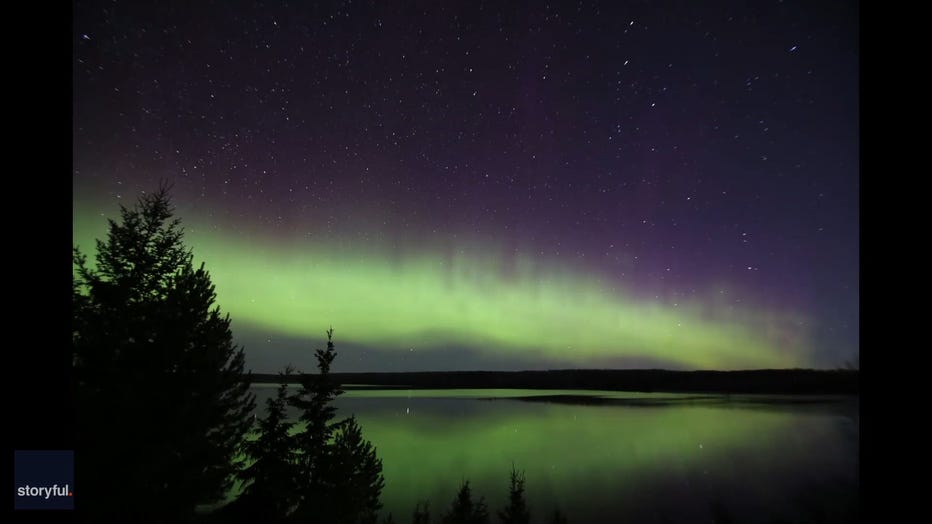 John Weatherby, a photographer in Iceland, also shared stunning footage captured on Oct. 30 in the country.

"Tonight was an actual dream," Weatherby wrote on Twitter. "KP7 aurora for our workshop group's first night. So grateful they got to see this incredible show."

The northern lights are created from a collision between electrically charged particles from the sun that enter the atmosphere of the earth and show up at night when the sky is dark. They are typically observed across Finland, Sweden, Norway, Iceland, Greenland and Canada, according to The Aurora Zone, a northern lights travel company.

The Halloween phenomenon came after the sun on Thursday launched what is called an "X-class solar flare" that was strong enough to spark a high-frequency radio blackout across parts of South America. The energy from that powerful flare is trailed by a cluster of solar plasma and other material called a coronal mass ejection, or CME for short.

The CME then headed toward Earth, prompting the National Oceanic and Atmospheric Administration to issue a warning about a potentially strong geomagnetic storm on Oct. 30 and Oct. 31.

"Impacts to our technology from a G3 storm are generally nominal," the U.S. Space Weather Prediction Center wrote in a statement on Oct. 29. "However, a G3 storm has the potential to drive the aurora further away from its normal polar residence and if other factors come together, the aurora might be seen over the far Northeast, to the upper Midwest, and over the state of Washington."

And while scientists had said the strong solar flare would essentially supercharge the northern lights and make them visible farther south, some experts cautioned that the display would not be as impressive in those lower latitudes.

"This could be a great show for people in the mid-to-upper U.S. latitudes for aurora," C. Alex Young, NASA's associate director for science at the Heliophysics Division of the agency's Goddard Space Flight Center, told Space.com. "Especially those in Canada, [Upper Peninsula of Michigan], Alaska, Iceland, Norway, Scotland, etc."

Landing on most travelers’ bucket lists, experts say the best time to witness the northern lights is typically in the springtime (March/April) and autumn (September/October), which has the highest level of aurora activity, according to Norway’s official visitor website.