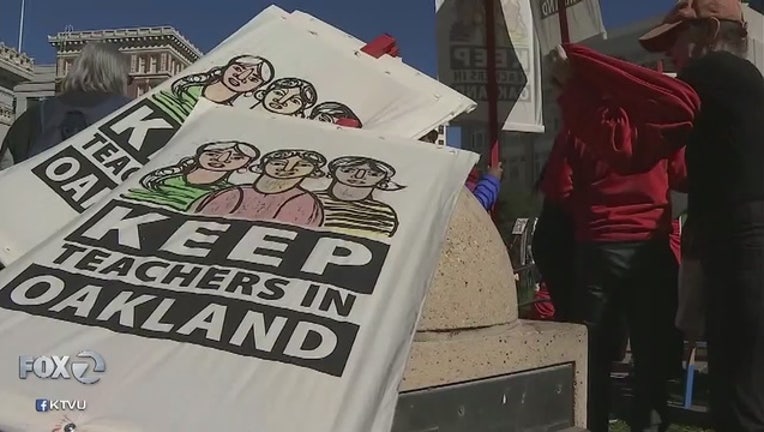 OAKLAND, Calif. (KTVU) - The city of Oakland is pitching in to save schools’ restorative justice programs and foster care managers, as well as restore library services, which were slashed from next year’s Oakland Unified budget.

On Tuesday, the Oakland City Council voted to use real estate transfer tax revenue to give the school district a $1.2 million grant to pay for these educators, who are charged with helping students resolve conflicts and figure out positive alternatives to discipline.

These employees, along with foster care managers and library techs, are among hundreds who may get layoff notices by April 30 if the district can’t find another way to pay for them.

The day after a seven-day teacher strike ended, Oakland Unified’s school board voted to slash around $22 million from the budget for the 2019-20 school year. The budget cuts were made in order for the district to remain fiscally solvent and to fund teachers’ raises agreed to in the contract that was settled after the strike, district officials have said.

The lack of guaranteed funding for the Oakland Unified School District is why Kaplan and council members Nikki Fortunato Bass, Noel Gallo and Sheng Thao proposed giving the one-time grant, as they seek to find longer term solutions to their fiscal woes.

The money will come from excess real estate transfer tax revenue: $800,000 of it will go to funding the restorative justice programs and $400,000 will go toward libraries and the foster youth case management according to the resolution. Kaplan's chief of staff Julie Wedge told KTVU that the specific breakdown of what schools will get the money will be provided at a future meeting of the Education Partnership Committtee.

Although schools get their funding from the state and have their own governing boards that determine how that funding is allocated, Kaplan told the East Bay Times that having programs like restorative justice is a matter of violence prevention, which is an issue that city government is concerned with.