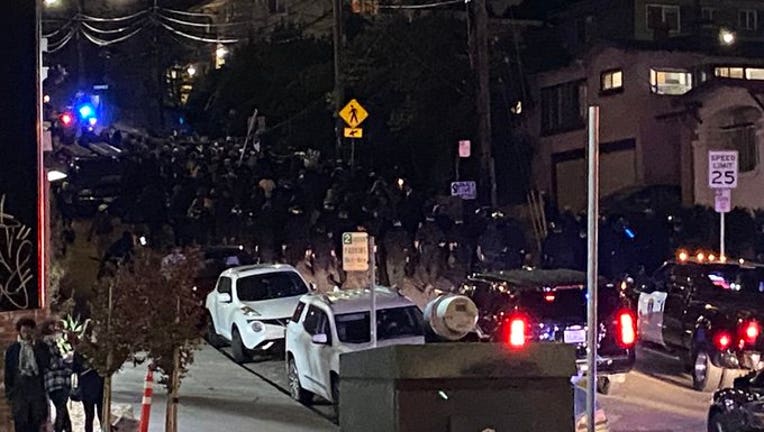 The Oakland police department shared this photo on Aug. 29, 2020, a night it said it arrested six people during demonstrations that turned into clashes with officers.

Twenty-four people, 11 of them Oakland residents, were arrestedduring three nights of protests last week that devolved into vandalism and violence during protests Wednesday, Friday and Saturday nights of the shooting by police of Jacob Blake in Kenosha, Wis., Oakland police said Monday.

Police said that on Wednesday night, a crowd had gathered in the 1400 block of Broadway by 8 p.m. for an event that was promoted by a group with the hashtag Yayarearevolution.

Within the hour the crowd size grew to an estimated 600 people, police said, and the speakers could be heard inciting the crowd with chants of "Kill the Cops" and "Burn the city down." The crowd later marched throughout Oakland's downtown and residential areas.

For about four hours Wednesday night, the crowd moved from downtown along Grand Avenue to the Grand Lake neighborhood. The crowd set fire to the Alameda County Superior Courthouse, structures, vehicles and trash cans. The crowd also vandalized businesses and caused more than $100,000 in damages to the Ronald V. Dellums Federal Building and U.S. Courthouse.

"The actions of the crowd continued to traumatize our community,"police said in a news release Monday night. "Many residents attempted to deter the crowd in their neighborhoods but were met with threats of violence and destruction."

Windows were broken at 21 businesses - many of which have beendamaged during previous protests, police said - and a 100% affordableresidential housing complex on Grand Avenue sustained damage. The Oakland Fire Department reported 25 to 30 fires, including fires that destroyed two vehicles, plus several structure and numerous trash cans.

On Friday, a crowd of an estimated 250 gathered, again in the 1400block of Broadway, for another #Yayarearevolution protest event, police said.

They marched throughout Oakland's downtown and residential areas. Rocks and bottles were thrown at police, and lasers were pointed at police officers and a news crew. No damage was reported, but 16 arrests were made, police said.

Six more arrests were made Saturday night, when a crowd gatheredat Grand Avenue near Interstate Highway 580 and marched in the Grand Lake commercial area and the Mandana neighborhood. Police officers were assaulted with rocks, bottles and wood shields, and lasers were again pointed at officers. The only report of damage Saturday night, police said, was graffiti on a commercial building.

"OPD will continue to facilitate safe spaces and places for peaceful protests," police said in Monday's statement "We ask those organizing gatherings in Oakland to remain peaceful."