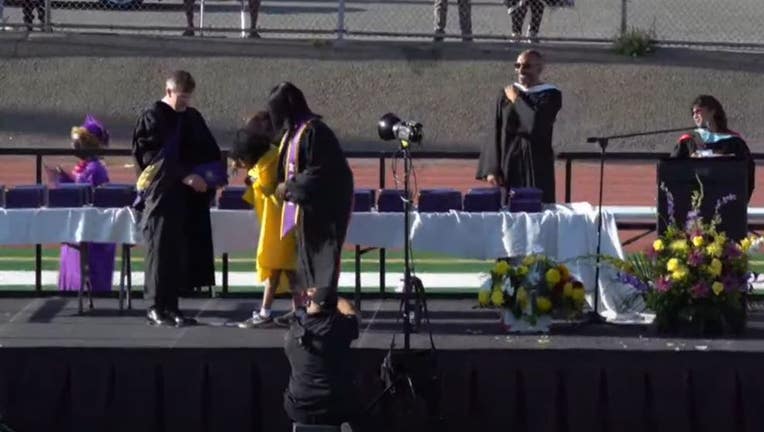 Oakland Technical High School's Jordan DeBose Holman, 19, was told she would never be able to walk on her own. But the teen has defied the odds and on May 19, 2022, she walked the stage to receive her diploma.

OAKLAND, Calif. - Graduation season has been a time to celebrate accomplishments, applaud making it to the finish line, and on those extremely special occasions it’s something even more: a moment to acknowledge beating the odds and achieving the impossible. No more true were these sentiments than when Jordan DeBose Holman, a special education student at Oakland Technical High School, got out of her wheelchair and walked across the stage to receive her high school diploma last month. 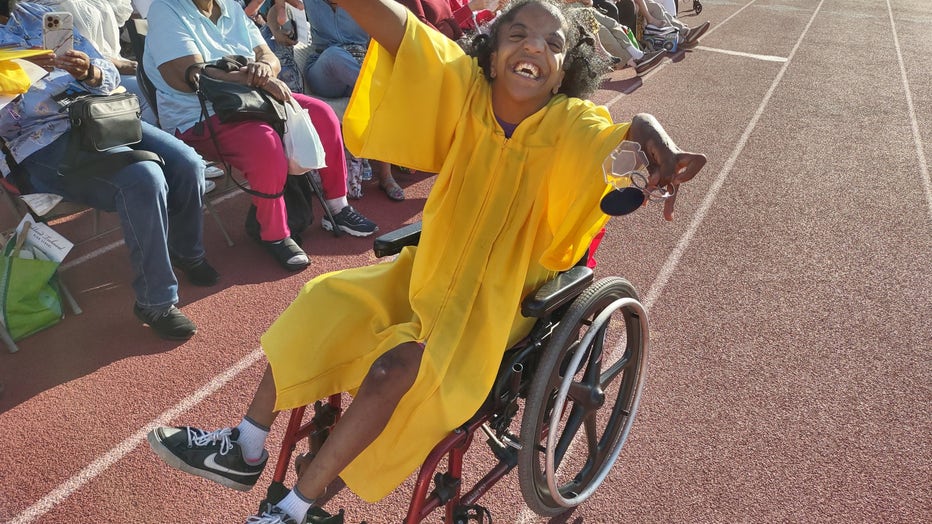 It was a remarkable moment because it wasn’t that long ago that DeBose Holman, 19, surprised her family by walking on her own. Wheelchair-bound for much of her life, doctors had told her mother that if her daughter was not independently taking steps by the age of five, it would never happen.

But the doctors were wrong.

Her mother, Tandra DeBose, said that a little more than two years ago, just before the pandemic hit, she was talking with school staff members when they revealed that her daughter had been walking with them. DeBose initially didn’t think much of it because her daughter, then 17 years old, was able to get out of her wheelchair and move around with the assistance of others. But that’s not what school staff meant.

"She always walks," DeBose explained to them. "‘No, by herself,'" the mother recalled shool officials tell her, saying she was incredulous. "I was like, ‘What?’ And then I called her name and she got out of her chair and she came to me by herself, and I was just in shock," DeBose was quoted as saying in an Oakland Unified School District (OUSD) press release in November.

The teen’s mother has called her daughter's accomplishment "a miracle."

DeBose said that despite the nearly two dozen doctors they’ve seen, her daughter’s disability has remained undiagnosed. At birth, doctors said her child would not have the ability to balance, leaving her dependent on a wheelchair to get around. She's also non-verbal and has never been able to speak.

But it appeared that to the teen, barriers were meant to be breached as she's forged ahead to defy the odds and overcome the limitations placed before her.

Her mother has played a major role in empowering her daughter by initially teaching her to crawl and work toward building up her balance. DeBose said her daughter has also had surgery on her feet which helped improve her ability to balance.

Prior to that day in March 2020, she had never seen her child take those steps on her own. But since then, the mom said her daughter hasn’t stopped, letting the world know, "I can do this."

DeBose told KTVU that she couldn't be prouder of her girl, whom she called a loving, sweet blessing and "a wonderful soul." The mother shared that her daughter will continue with her studies by attending classes offered by OUSD's young adult program until the age of 22. "She keeps excelling every day to every year!" the mother said.

DeBose also said that the teen's family has always believed in her determination and her inner strength. "We never gave up on her! No matter what!" the mom said, adding, "She is a strong Capricorn, and she is a ‘way’ maker!"

The teen's accomplishments prompted a special shout-out from OUSD Superintendent Kyla Johnson-Trammell, who in a newsletter on Friday honored the new grad, saying, "She proved the doctors and the doubters wrong. Jordan is now a high school graduate."

While DeBose Holman remained non-verbal, her mother has evidence-driven hope that her daughter might be able to do what others have said would be impossible and speak one day too. Though even without words, the newly minted high school graduate has not failed to communicate her emotions and express herself.

After walking the stage to receive her diploma, the standard "congratulations" handshake from the principal to his students turned into an all-out embrace from the elated teen.

She hugged him, expressing in no uncertain terms that she was taking in the moment and celebrating each step-- the ones she's taken with the help from others along the way, the miraculous steps she's taken on her own, and those she would take into this next stage of life as a determined, odds-defying high school graduate. 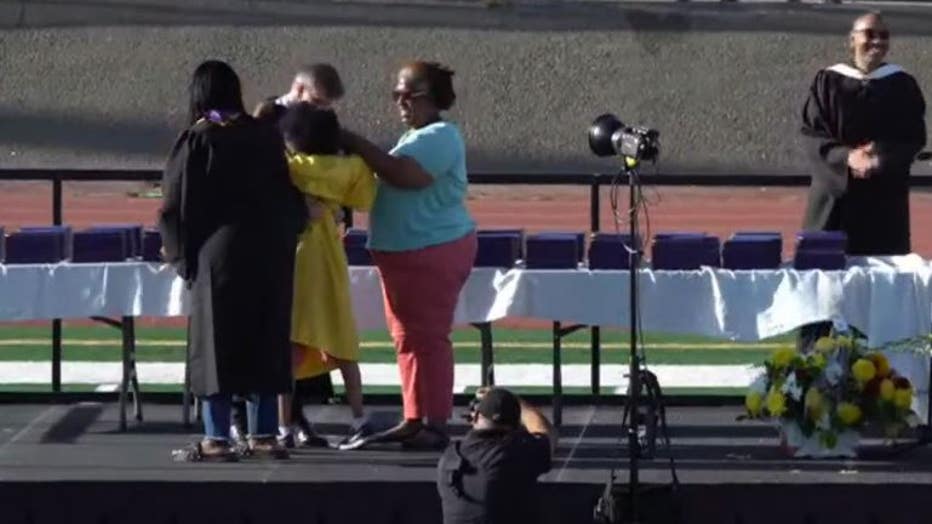 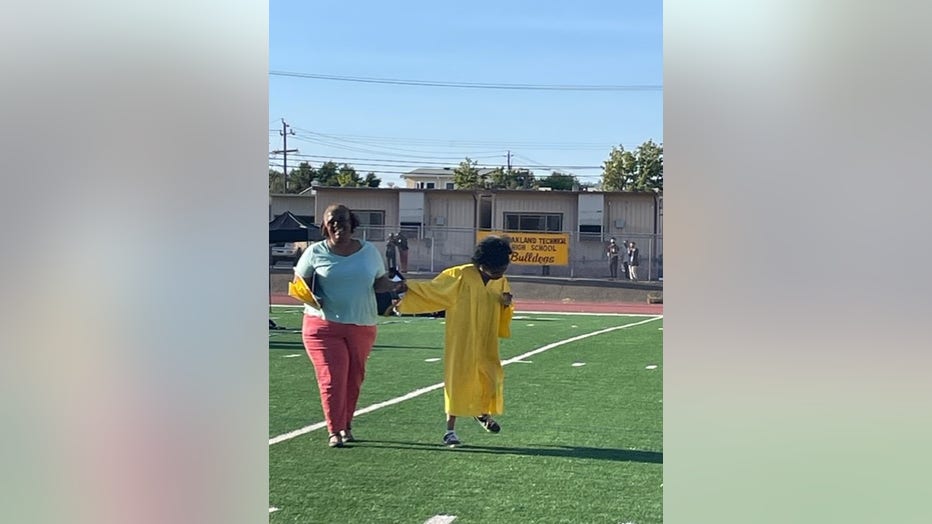 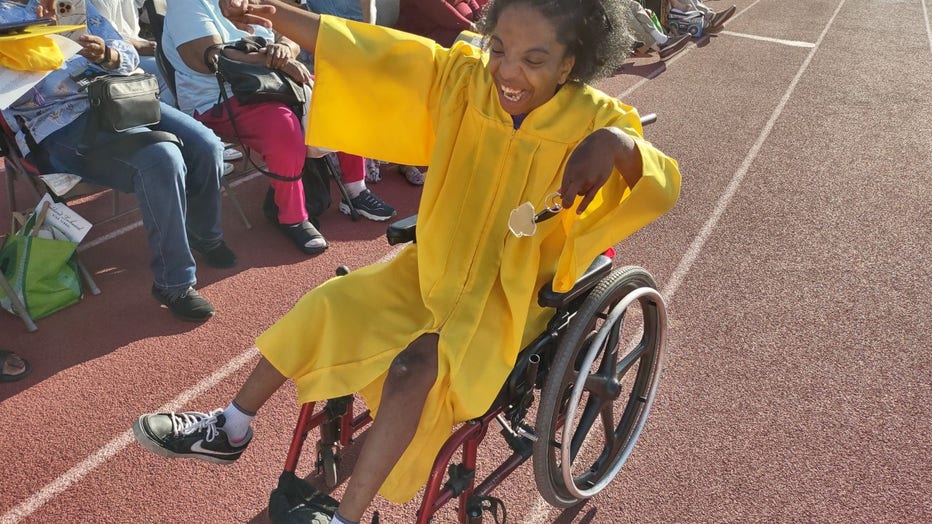 A delighted Jordan DeBose Holman, 19, at her graduation from Oakland Technical High School on May 19, 2022. (Oakland Unified School District/John Sasaki )