Multiple people were listed in critical condition after the pedal pub rolled over at 14th Street and West Peachtree Street in Midtown.

ATLANTA - Atlanta police said the driver of a pedal pub faces DUI charges related to a crash that injured 15 people.

The pedal pub crashed on Saturday near the intersection of 14th Street and West Peachtree Street in Midtown. Police did not name the driver, but said they face DUI and a business permit violation.

Fire officials said two people went to Grady Memorial Hospital in critical condition, but none of the injuries are considered life-threatening.

The vehicle was attempting to make a turn but was traveling at a high rate of speed and tipped over, Atlanta police said. 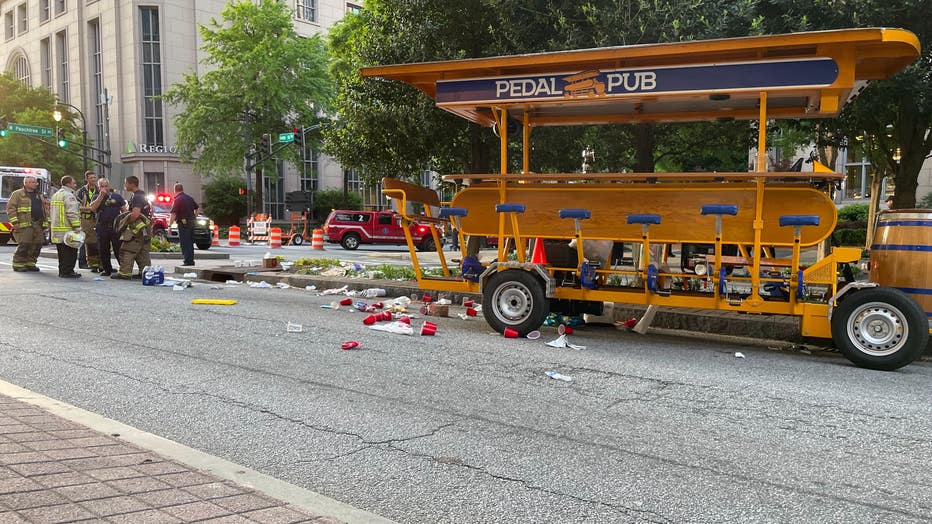 Fire officials said, in addition to the two critical injuries, 10 people had minor injuries and three had serious injuries. Police said all 15 people injured were passengers on the shuttle.

No other vehicles were involved, Atlanta Fire said. The intersection was shut down while fire officials cleared the road and police investigated. It was an unorthodox emergency for some first responders.

"This is a unique challenge, simply because it's a multi-casualty incident," Atlanta Fire Battalion Chief Jason McClain said. "This is not an everyday call, although we do train for these incidents."

A woman at the scene who said she owned to pedal pub said it's the first time it's been in an accident in two years.

A witness said she saw the shuttle flipped on its side and then saw bystanders intervene quickly and lift the bus upright, freeing trapped passengers.

"I was just laying in bed, and then I heard several screams," she said.