LONDON - A photo of what appears to be two mice fighting over a tiny food crumb inside a subway station has won the Natural History Museum in London's Wildlife Photographer of the Year competition, an annual showcase of the world’s best nature photography.

The photo, called “Station Squabble,” was taken by Sam Rowley, a wildlife filmmaker and photographer. The epic showdown was taken on a station platform in London’s Underground and won the Wildlife Photographer of the Year's People's Choice Award after a public vote. 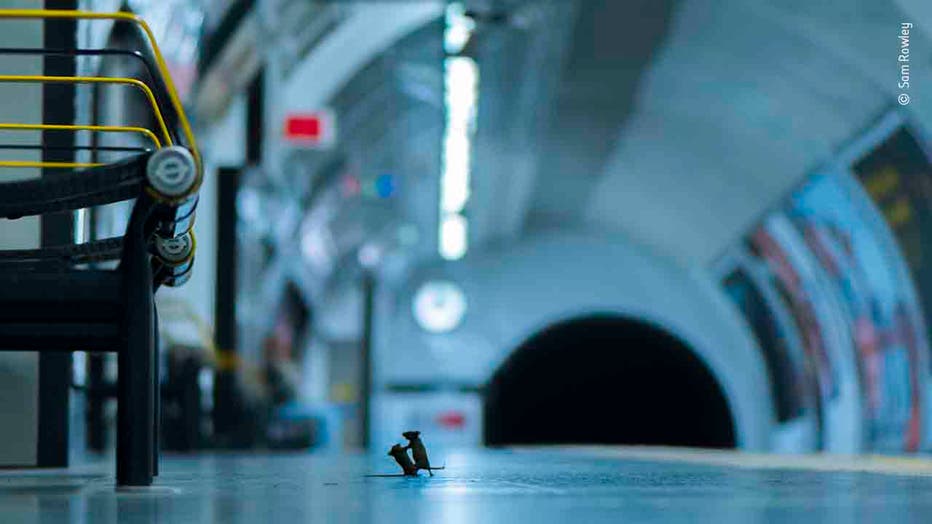 Wildlife Photographer of the Year is developed and produced by the Natural History Museum in London. (Photo credit: Provided / “Station squabble” by Sam Rowley, UK)

More than 48,000 images were submitted for the competition, and Rowley’s was picked from a shortlist of 25 photos chosen by the museum.

Rowley said the mice were fighting over a few leftover crumbs dropped by commuters and their encounter lasted just a split-second before one triumphantly scurried away. The photographer visited multiple platforms every night for a week while waiting for the perfect shot of London’s station mice.

When he saw this rodent brawl, Rowley said he knew his patience had paid off.

“Many have confessed to enjoy watching them scurry around the otherwise boring station platform,” Rowley said in a press release. “Not everyone is lucky enough to see wildlife in the more remote, (unspoiled) regions of the world. Therefore, we have to appreciate the commoner species, which is what my urban wildlife photography's all about.”

Rowley said he believes nature can be beneficial for a person’s mental health.

“I feel everyone needs to stop and watch mice, pigeons or any other local wildlife.”

The image will be displayed in the Wildlife Photographer of the Year exhibition at the Natural History Museum through May 31.

Four other “highly commended” images won over nature photography fans and made it into the top five, including Aaron Gekoski's image of an Orangutan being exploited for performance, Michel Zoghzhogi's picture of a mother jaguar and her cub holding onto a captured anaconda, Martin Buzora's portrait of the a conservation ranger and a baby black rhino, and Francis De Andres's shot of a group of white arctic reindeer.

“It's been a lifetime dream to succeed in this competition in this way, with such a relatable photo taken in such an everyday environment in my hometown,” Rowley said. “I hope it shows people the unexpected drama found in the most familiar of urban environments.”

The winners of the 2020 competition will be announced in October, which is open to photographers of all ages and abilities.