People are leaving coats on a bridge in Ireland for the homeless to wear during the winter, but the movement is not sitting well with city officials.

DUBLIN - In an effort to keep the city’s homeless warm during the cold winter months, a man in Ireland started a movement in which coats are left hanging on a pedestrian bridge for those in need.

But the movement is apparently not sitting well with city officials.

Patrick Fryers, the organizer behind the #WarmForWinter campaign, started leaving the articles of clothing last year under a bridge near Dublin’s Connolly Station free of charge.

“I didn’t realize how bad Ireland’s homeless situation was until I started working down here,” Fryers said. “I came across an image on social media that showed jackets wrapped around trees for the homeless in another country. To me this was a brilliant idea anybody and everybody can be a part of.” 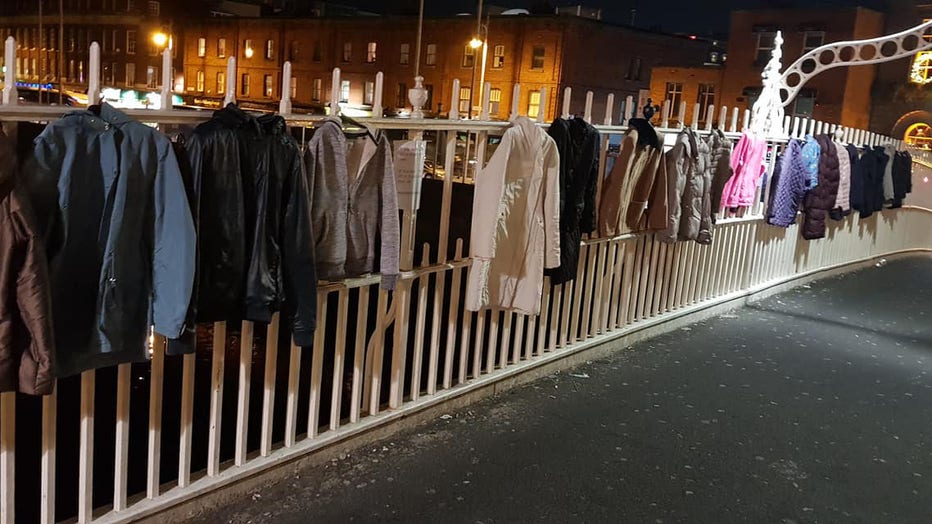 He then asked friends and family for their old winter jackets and got his local community of Clone in Ireland’s County Monaghan involved. On his way to the normal drop off area, he noticed a person begging on the Ha'penny Bridge — a well-traveled pedestrian bridge built over the River Liffey in Dublin.

Fryers realized Ha'penny Bridge might be a better location for people to take notice of the idea and hopefully spread to their own communities.

A sign left on the bridge Dec. 3, alongside dozens of coats, reads: “If you need one then please take one. If you want to help, please hang one up. #warmforwinter."

Fryers said a passerby snapped a photo of the sign and the campaign soon took off.

The charitable initiative recently hit a snag, however, when the Dublin City Council said the items would be removed for health and safety reasons, according to The Irish Times. It also said the jackets reduced the flow of traffic and caused congestion on the bridge.

The council said the coats would be distributed through its homeless services and urged people to donate their unwanted coats to charities.

Fryers said the coats were removed on Saturday, and in defiance, he returned to the bridge on Monday with 50 more jackets to hang up.

“I have to say I was pretty angry that the jackets where taken down under ‘health and safety’ issue when the country is crying for the health and safety of our nation’s homeless,” Fryers said. “#Warmforwinter was never contacted from the DCC in relation to the jackets and we still don’t know what charity the DCC claim they have given the jackets to.”

But Fryers said the reaction from the public has been “amazing.”

“It has touched peoples’ hearts and brought a new awareness to the issue that is homelessness,” he said. “The jackets that the DCC took down were those belonging to the people that they themselves put up.”

He continued: “If I could hang house keys on the bridge we would. But sadly only the government have that power as our homeless figures continue to rise reaching new records each week.”

The number of homeless people in Ireland reached more than 10,500 in October, including a record 3,800 children, according to The Irish Times.

Despite the pushback from city council, Fryers said he and supporters of the movement will continue dropping off coats.

Since starting the #WarmForWinter campaign in Dublin, Fryers said similar initiatives have spread to neighboring cities — including Belfast and Cork. He added that people have reached out asking for advice on how to start their own movements in the United States, Canada and Australia.

“This campaign, like most, has been met with its fair share of comments that some might see as negative,” he said. “We appreciate everyone’s opinions but don’t let someone’s opinion stop you from helping others.”