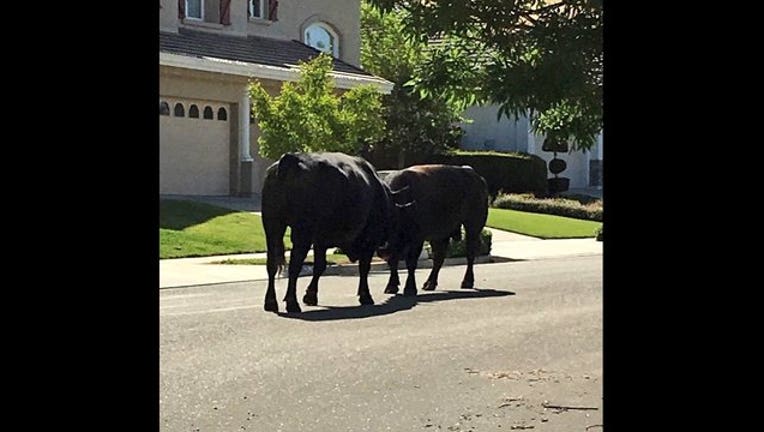 FREMONT, Calif. (KTVU) - UPDATE: Fremont Police gave an update to this unusual bullfight story to say that it was illegal trespassing that led to the bulls escape. They tweeted the update Wednesday and said it was community members responsible for opening the gates of a private- property ranch, so that they could hike in the hills.

"The owners are good neighbors to the surrounding residents and have been very responsive," police wrote.

Fremont Police Department tweeted an unusual image Tuesday of two bulls fighting in the middle of the road in what looked like a suburban setting.

The bulls belong to a rancher off Mission Boulevard. According to police, they received the call at 9:33 a.m. from Castro Lane. The caller said two "black cows" were fighting in the roadway.

In their tweet they wrote "When an active 'bullfight' comes out over the radio...meetings take pause and everyone listens for the next update! Luckily the owner arrived and helped MOOve the two back to their property. #TrueStory"

Police responded to our inquiry and said at first the owner of the bulls was unsuccessful in corralling them.

Responding officers had to call for backup in addition to the rancher's sons arriving as well. The sons had better luck herding them to their property. A specific address for the ranch was not given, but it was said to be within the same vicinity.

Police said the rancher was fined an administrative fine of $100 for each of the bulls. Two residencies on the 41000 block of Canyon Heights had property damages from the livestock scuffle. A fence was broken and planter boxes were trampled as the bulls ran through the front yard.

Police say with a few ranches east of Mission Boulevard, they do receive calls from time to time about livestock, but that this was a pretty uncommon event. Animal Services officers go through training to prepare for these types of situations.

Police had all-hands-on-deck. Fortunately the situation was resolved safely with no one being injured and minimal damage.