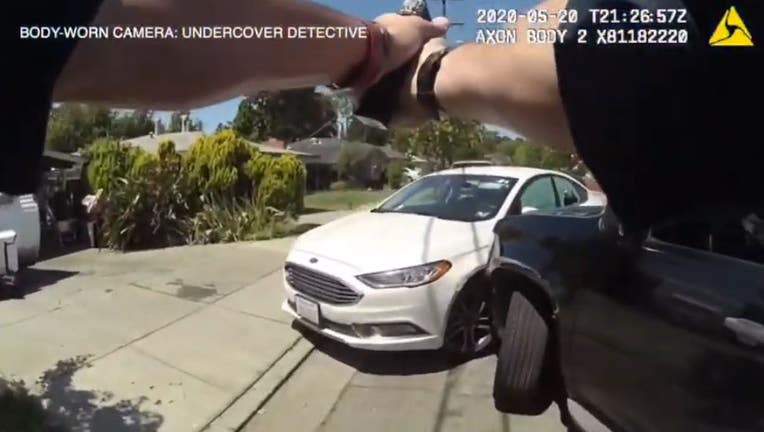 Body-camera footage of an officer-involved shooting in Hayward.

HAYWARD, Calif. - Hayward police on Thursday released video footage of the police
shooting in May that killed Stoney Ramirez, who was a person of interest in the death of a local homeless man.

Ramirez was not armed, but police said they had reason to believe
he was.  Hayward police Sgt. Claudia Mau said he is still a person of interest in the May 1 death of Mike Lorenzo, 65, which remains under investigation.

An undercover detective and Officers Kyle Martinez and Dynaton
Tran fired at Ramirez, Mau said. She said police aren't releasing the name of the detective to protect his identity but he was the person in the video who shot at the windshield of the car Ramirez was driving.

The video begins shortly before an officer pulls up in the street
behind the white car where Ramirez was sitting.

As officers tell Ramirez to put up his hands and keep them up,
Ramirez tries twice to back up. His car hits the front of a police SUV that police said was meant to block the driveway where Ramirez was parked.

Police said he failed to follow officers' commands before being
shot, and they said that he was on felony probation and eligible to be searched at any time. He died at the scene.

Hayward Police Chief Toney Chaplin says in the video - which
includes footage from two officers' body-worn cameras and a neighbor's security camera and of Chaplin speaking in an office - that police later learned that the car Ramirez was in had been stolen.