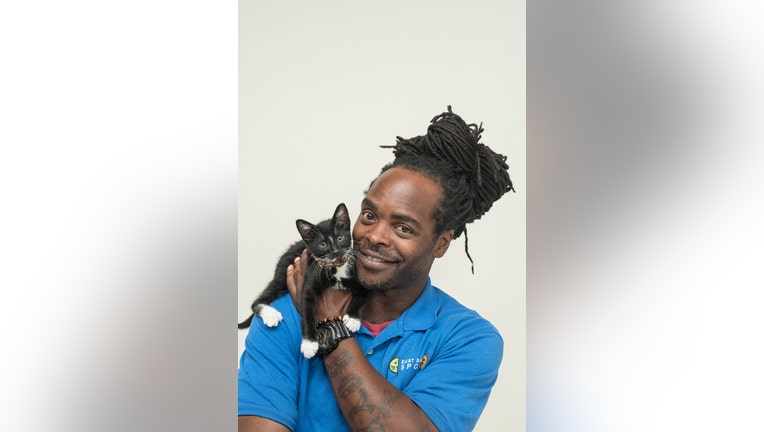 Anthony Varner worked at the East Bay SPCA. He was killed on Dec. 12, 2019 Photo: Heidi Elder

OAKLAND, Calif. - Co-workers of Anthony Varner said he was a happy-go-lucky guy who loved goofy looking pit bulls and would always sing and dance – loudly – at work.

“You could often hear Anthony before you could see him,” said Allison Lindquist, president of the East Bay SPCA, where Varner had worked as an animal care specialist since 2016. “He loved to sing and dance in the halls. That’s why his death is so deafening.”

The 40-year-old father was killed Thursday in West Oakland about 6:30 p.m. in the 700 block of Adeline Street. When officers arrived, they found a man in the street with traumatic injuries that were not gunshot related. He was taken to a hospital, where he was pronounced dead, police said.

Friends said they heard that Varner was on the way back from a grocery store, met someone he knew, and that the other person was the target of the violence. He was caught in the crossfire, the friends believe. Police said they would look into the matter, but did not immediately confirm that account.

The ripple effect of these murders is so horrible. People like Anthony have family, friends and co-workers. I just pray that these killings will stop.”

A-1 was an influencer in the turf dancing movement.

Lindquist said that the tight-knit SPCA community is grieving over Varner’s death. He worked in animal care and helped train new staff. On Tuesday evening, employees held a private gathering to honor his memory.

“He was a family member,” she said on Tuesday. “This is just so very difficult.”

She remembered Varner interviewing for the job.

She described him as a “larger than life” personality, a “very popular” man who was optimistic and an extremely hard worker. For his birthday in March, he asked that people donate to the East Bay SPCA instead of giving him presents.

Varner was also a renowned "turf dancer" whose influence in the late 1990s street dance culture led to a documentary that featureed his style. Friends wrote on Facebook that Varner would regularly win talent shows when he attended McClymonds High, with his dance moves.

"His dancing attracted a lot of people," said Jeriel Bey, credited with putting turf dancing on the map. "He would say that the streets have a different style of dancing. And that you could tell where people came from based on how they danced. Turf dancing unites everyone. A-1 was a master storyteller with his body. He was very smooth. Always smiling."

"He would say that the streets have a different style of dancing. And that you could tell where people came from based on how they danced. Turf dancing unites everyone. A-1 was a master storyteller with his body. He was very smooth. Always smiling." (Corn Wilkerson/FB)

Bey, who referred to Varner as "A-1," said his friend had been shot before and suffered some leg injuries, which is likely why he never made it further in his dance career. "I think he was in the wrong place at the wrong time," Bey said of Varner's previous shooting injury.

So Varner stayed busy in other ways. Bey said he judged a lot of dance contests, he also worked at the AM/PM Arco station on West Grand Avenue in addition to his job at the SPCA.

Lindquist said that Varner’s death has left not only a void at work, but in the greater Oakland and Bay Area community.

“You hear about people being killed on the news,” she said. “But when it happens so close to home, the feelings are so profound. The ripple effect of these murders is so horrible. People like Anthony have family, friends and co-workers. I just pray that these killings will stop.”