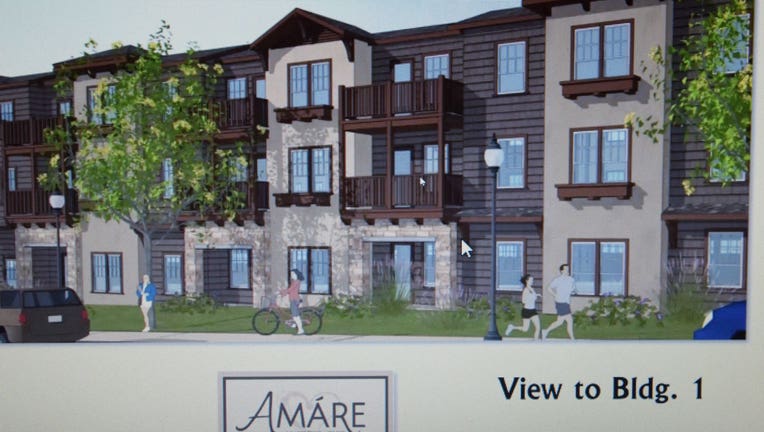 A screengrab from a city of Martinez staff report on the Amare Apartment Homes project.

At a Tuesday night workshop, the Martinez Planning Commission got a fresh look at the Amare Apartment Homes project, planned for a 6-acre parcel along Arnold Drive east of Glacier Drive.

It had first been proposed as 174 market-rate units in March 2016 but later revised by developer The Austin Group LLC. The revised project has 182 units, nine of them "below market rate." It would consist of six three-story buildings and one four-story building.

While the buildings and designs themselves got generally good reviews from commissioners and Zoom meeting viewers, all commissioners and many spectators had concerns about the planned number of parking spaces -- 265 -- not being enough.

"I don't know anyone without a car, and I don't know any couples that don't have two cars," resident Danielle Napoleon told the planning commissioners.

Other speakers said they fear the streets of a nearby housing tract would become clogged with parked cars owned by apartment residents or visitors. Several public commenters said parking is challenging at a commercial strip built several years ago by The Austin Group on Arnold Drive, and said they don't want a repeat of that at the Amare site.

Planning Commissioner Susan Gustofson said using public transit doesn't appear to be a practical option at that site. The nearest County Connection bus stop is about a quarter-mile to the west of the project site, and there aren't sidewalks stretching the entire way between the two points.

"Just because it's within (a quarter mile) of a bus stop doesn't mean doesn't mean it's useful to the residents there," Gustofson said.

Commissioners said they will continue to press the parking and transit issues, including access to BART, to increase the Amare project's transit-friendliness. But they and others said they welcome the prospect of more housing units in Martinez, including the below-market-rate units.

"I have so many patients whose lives would be changed if I could provide them a home," Dr. Adam Buck, a physician at the Contra Costa Regional Medical Center hospital in Martinez, told the commissioners. "If you don't like homelessness, the best way to fix that is to build homes."