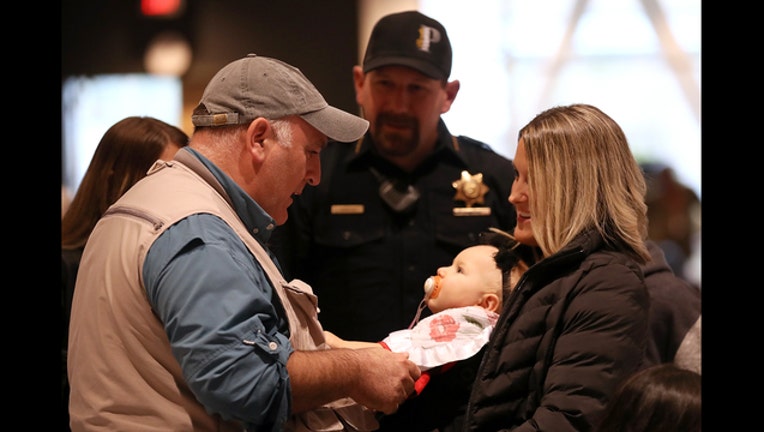 Hannah Crenshaw hosts a Thanksgiving dinner each year, cooking turkey, stuffing and mashed potatoes -- her favorite -- for up to 15 guests at her home in Magalia.

That's not an option this year. Her house burned down in the wildfire that tore through the town of Paradise and surrounding communities, killing at least 83 people and destroying more than 13,000 homes.

Instead, the 26-year-old Crenshaw will be spending Thanksgiving with her husband's family in nearby Durham. She's trying to see the best in the heartbreaking situation.

"It doesn't really feel like Thanksgiving," she said. "But Thanksgiving's my favorite holiday. I guess I have a lot to be thankful for this year with everything going on."

The Camp Fire has displaced tens of thousands of people, with hundreds still unaccounted for. The blaze was 90 percent contained Thursday, two weeks after it began.

It won't be a normal Thanksgiving for any of those families, but businesses and hundreds of volunteers have stepped up to ensure turkey, potatoes and pie are available as a small slice of comfort for anyone who wants a plate.

"It will be a respite from the frantic activity of trying to put our lives back together and our town back together," Paradise Mayor Jody Jones said.

Scores of volunteers also are opening their houses to strangers to provide a more intimate Thanksgiving.

Rachael Anderson is hosting a displaced mom and daughter at her home in Redding, about an hour and a half from Paradise. Anderson knows what it's like to live in a community devastated by flames -- a massive wildfire swept through Redding last summer.

She didn't lose her home, and she now wants to share it with others in need. She'll be joined by Athenia Dunham and her 15-year-old daughter, Natalie.

"They've lost their home, their traditions, whatever it is that they do. I just want to give them a little piece of home," Anderson said. "That's what Thanksgiving's about; it's not just about your blood family -- it's about giving thanks and helping each other."

Joann Barr will be at one of the community dinners hosted by the brewery and World Central Kitchen, held on the campus of California State University, Chico. Normally she'd cook at home -- deviled eggs are her Thanksgiving specialty. She did not lose her house but has been under evacuation orders for days.

"It's sad, but there's plenty of things to be thankful for," she said outside a disaster assistance center at a Chico mall. "I'm thankful for the shelter I was able to go to, now the motel that I'm in -- everything I have, basically."

Some people didn't even realize Thanksgiving had arrived amid the chaotic and emotionally draining rush of the past two weeks.

"Is that today?" Amy Sheppard asked Wednesday, rushing to pack her belongings in a black trash bag as rain fell over a Walmart parking lot where she and many others had camped for days.

Sheppard would normally spend Thanksgiving with three dozen family members and friends at a home in Magalia. That home -- a family friend's -- and her own both burned down. This year, she's likely to spend the holiday in a hotel room with her sister and 1-year-old niece.

Sheppard began to cry as she explained her son was staying with other family after the fire and that they would likely spend the holiday apart.

People like Faun and Danny O'Neel hope they can provide some relief, even for a few hours, for those who have lost everything. The couple who live in the Sacramento-area city of Folsom are hosting three families Thursday.

Faun O'Neel's parents and grandparents lost their homes in a Calaveras County fire several years ago, so she said opening her home to others was a "no-brainer."

Thanksgiving at a stranger's house may not be what her guests originally expected. But she hopes it can provide some calm in a trying time.

"A few hours of normalcy," O'Neel said. "Where they can laugh and enjoy other peoples' company without thinking about what they just lived through and what is in front of them."