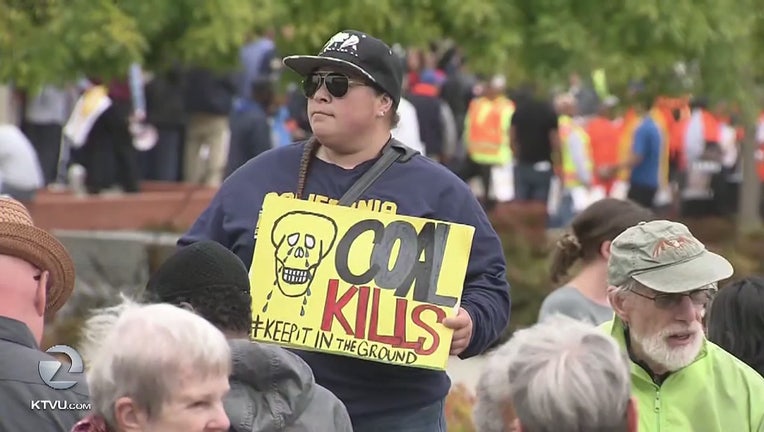 RICHMOND, Calif. - A showdown over coal storage in Richmond is set for Tuesday, when the city council will consider a law that would effectively stop the shipment of a million tons of coal annually from a key terminal on the East Bay waterfront.

The proposed law was prompted by residents' complaints about coal dust from the Levin Richmond Terminal on the city's shoreline.

Coal mined in Utah by Wolverine Fuels is shipped to the Levin Richmond Terminal, where it is stored before export to Japan. The terminal also stores petroleum coke, a byproduct of oil refining, from the Phillips 66 refinery in Rodeo before it is shipped.

Under the proposed ordinance, Levin Richmond would have three years to phase out coal and petcoke storage and handling at the site -- allowing the terminal to transition to storing other materials, according to a report from Richmond city staff.

The proposed law would only govern storage of coal in Richmond, however, and wouldn't regulate transportation of coal through the city.

The No Coal in Richmond group and neighbors of the terminal say coal dust has been accumulating on homes and streets, creating a health hazard. The Sierra Club submitted a list of 600 residents who signed an online letter in favor of the coal ordinance to the city in November.

But terminal officials and Wolverine Fuels oppose the new law and have threatened legal action, saying it would be an economic blow and affect thousands of jobs at the mines and terminal, as well as employment for truck drivers and other support jobs.

Levin Richmond Terminal Corp. employs 62 people, including 48 members of Operating Engineers Union Local 3, according to a letter to the city in July from Gary Levin, the company's president and chief executive officer.

In 2016, Oakland's council passed an ordinance banning storage and handling of coal, but the developer of a coal project terminal successfully sued the city in federal court. The city appealed the ruling, and the case is ongoing.