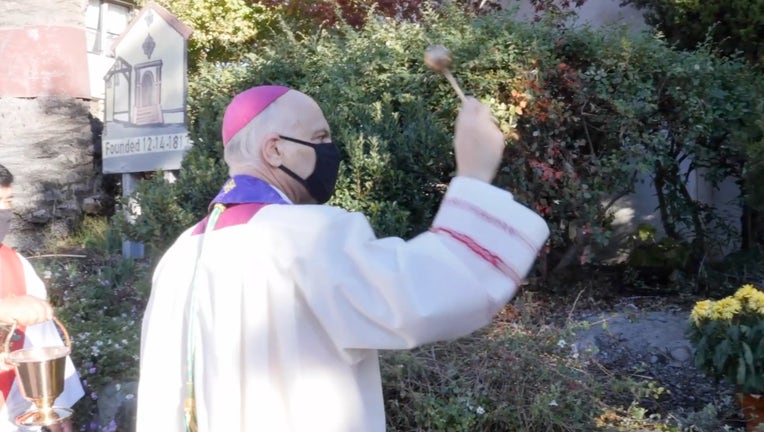 SAN RAFAEL, Calif. - The archbishop of San Francisco performed a short exorcism ceremony Saturday outside a Catholic church where protesters had earlier toppled a statue of Father Junipero Serra, saying the ceremony was intended to drive out evil and defend the image of Serra.

Archbishop Salvatore Cordileone performed the ritual before some 150 supporters before holding a special Mass inside St. Raphael Catholic Church and an expected march to a Planned Parenthood clinic.

Serra was an 18th-century Spanish missionary priest and the father of the California mission system. The Franciscan priest has long been praised by the church for bringing Roman Catholicism to what is now the western United States, but critics highlight a darker side to his legacy. In converting Native Americans to Catholicism, critics say he forced them to abandon their culture or face brutal punishment.

Depictions of Serra have been protested and vandalized over the years, and Pope Francis’ decision in 2015 to elevate him to sainthood reopened old wounds. More recently, protests focusing on the rights and historical struggle of Black and Indigenous people led activists to topple statues of Serra in San Francisco, Sacramento and Los Angeles.

San Rafael police say they arrested five people on vandalism charges for knocking over the statue on Monday, leaving just the feet attached to the base. The statue is being repaired and will be returned.

Despite characterizations in popular culture, the newspaper reports that exorcism is more commonly a solemn ceremony to evict the devil or evil spirits from an area or person.

Cordileone said prayers in Latin, remarking that “the experts in the field tell me that Latin tends to be more effective against the devil because he doesn’t like the language of the church.”