A SF Chinatown rally calls for an end to violence that has impacted three elderly men.

According to police, the incident was initially reported on Saturday around 9:10 p.m. as a robbery at the corner of Clay Street and Walter U Lum Place, near Portsmouth Square.

Upon arrival, officers found three injured men. Two of the victims were taken to a hospital with injuries not considered life-threatening and the third victim was treated and released at the scene, police said. 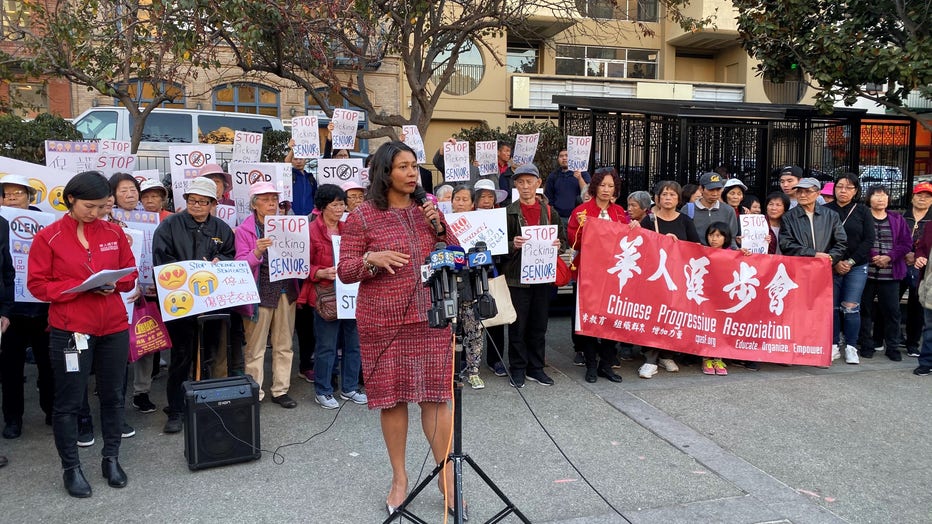 Mayor London Breed at a rally in San Francisco Chinatown over the recent attacks were elderly men were targeted.

Video of the attack, recorded by a bystander, shows the suspects attacking the victims and then fleeing in an SUV. Police said the SUV was last seen heading east on Clay Street.

Although no arrests have been made, Police Chief William Scott said the SUV has been described as an early 2000s model Jeep Cherokee type of SUV, dark gray in color. Police are also looking for at least three male suspects.

The video, which has been widely shared on social media, can be found here.

During the Tuesday rally, held at Portsmouth Square, dozens of members of the city's Chinese community showed up, many of them seniors holding up signs that read, "Stop Picking on Seniors."

"No one should walk in this city and fear that they might get attacked for whatever reason, especially not our seniors," Mayor London Breed said. "We are one community in San Francisco and it is time that we do better to take care of our seniors. We owe it to them for what they have done to raise us and take care of us."

"This is where all of the seniors, all of the kids, play and socialize," district Supervisor Aaron Peskin said. "We are going to saturate this area with additional law enforcement personnel. We are going to let everyone of my constituents behind me know that they can be safe here anytime, day or night."

"We need to come together as a community, as a city and not let racial divides tear us apart," said Cynthia Choi, co-executive director of the group Chinese for Affirmative Action. "This is not a matter of law enforcement, this a matter of all of us coming together for community-based solutions."

In addition, bilingual officers are stationed at the Portsmouth Square clubhouse both Wednesdays and Fridays from 4:30 p.m. to 6:30 p.m. to communicate with community members.

"We're going to do everything that we can do to make sure we do our jobs and bring folks justice," Scott said. "We're going to work relentlessly until we figure this out and solve this crime."

"This is a case where it really highlights the need for more culturally competent services for victims," he said. "We're not doing a good enough job with that today and one of my primary commitments as the next district attorney is to ensure that we expand resources in the language and cultural sensitivity that victims of crimes need."