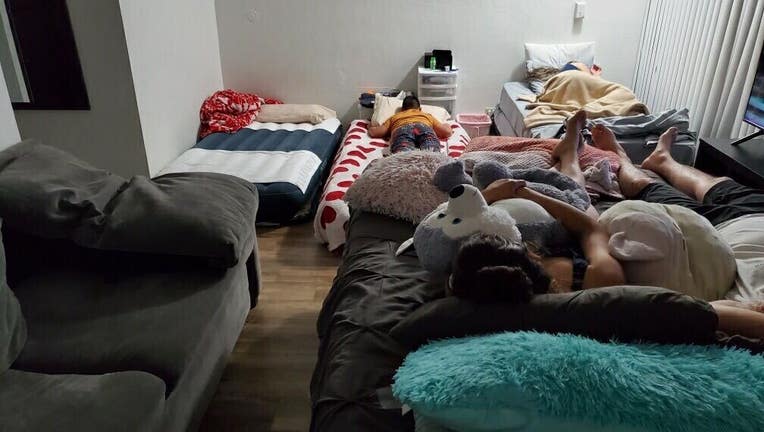 Roger and his five relatives live in this small, one-room apartment in San Francisco.

He was asked to leave the shelter where he had been staying, as there is now room for only people infected with COVID-19.

So, he's taken to the streets, to sleep and to ask for work.

His usual routine is waking up at 6:30 a.m., using WiFi to make phone calls to past employers asking if they need his handyman skills, and waiting for hours on the corner with others like him, hoping someone will need him to paint walls, move furniture or work on a construction project. In his spare time, he walks the neighborhood, helping people learn best practices about avoiding the spread of the virus and educating the community about eviction rights.

Plus, Martin just learned he has diabetes.

"I feel very bad, spirit-wise," Martin, who asked that his full name not be used, said in Spanish through an interpreter. "I am not well. I am not meeting my obligations to support my family."

Hoping at least to get a good night's sleep, Martin recently applied for a new program in San Francisco called the "High Risk Community Housing  Program."

Last week, 10 people moved into the 1,000 rooms available, said Supervisor Hillary Ronen, who has been pushing for the city to open up more hotel rooms for the homeless and people in need.

These rooms opened up, she said, when the city realized that they weren't being filled with first responders, as originally designed. Instead of having them sit empty, she said, the program for people at high risk was born shortly after a UCSF study pointed out that Latinos in the Mission District were disproportionately afflicted with coronavirus.

The study said that close living quarters were a factor for the higher level of coronavirus. Many Latinos also have jobs that tend to put them in direct contact with others, raising the chances for exposure to the virus.

Roger, who also asked that his full name not be used, lives in such tight quarters.

In an interview, the 49-year-old handyman said that he's been living in a tiny room with five relatives: His grandmother, son, daughter-in-law, sister-in-law and 9-year-old grandson off Church Street.

"I have serious depression," he said in Spanish through an interpreter. "Economically, I'm doing terrible. And it's very stressful living altogether."

His family has always lived in this small apartment. But before coronavirus, they would all leave the house for the day and come back only at night.

To relieve what he described as "tortuous days," he and his relatives have decided to stay up until 2 a.m. so they can sleep in as late as possible and the days won't seem so endless. As for sleep, the family sleeps on couches and air mattresses packed inside their room.

He and his family members have all been looking for work, with no luck. Their rent, $2,200 a month, is due on Monday.

He would very much like to apply for a hotel room, not only to get some distance and space from his relatives but to avoid the possible spread of the deadly disease.

"I'm feeling stuck," he said. "I would very much like to get out of this room."

IF YOU'RE INTERESTED: The application to request HRCH hotel accommodations is now available online.

San Francisco residents who work outside of the home can apply for themselves or a vulnerable household member for whom they want to reduce exposure to COVID-19 because the person is at least 60 years old or has a pre-existing medical condition. Questions? Email HRCH@sfgov.org

If you're interested in hiring a worker from the San Francisco Day Labor Program and Women's Collective call 415-252-5375. More information about the programs can be found here. You can also donate to Fighting for our Workers You can also email dispatcher Louis Legowsky at the program at sfdlp@3358@gmail.com if you'd like to hire a worker.